A hobbyist computer programmer in South Africa has devised a radical new way to read text online. Instead of reading a Web page in a traditional sense, in which a page of text cycles up as you scroll down, Richard Wallis prefers the text to remain in a fixed place while the page itself "unfurls" as you track down the page.

It's a very visual experience, so I fully encourage you to head over to Wallis' just-published blog post on the topic at MagicScroll.net. It takes a while to get used to, but give it a shot.

"Scrolling is a brilliant way to display a map or an Excel spreadsheet on a computer," Wallis writes. "But it's a terrible way to display text. That's because scrolling moves the text on a page. And moving text, even if it's under your control, will break your reading rhythm." 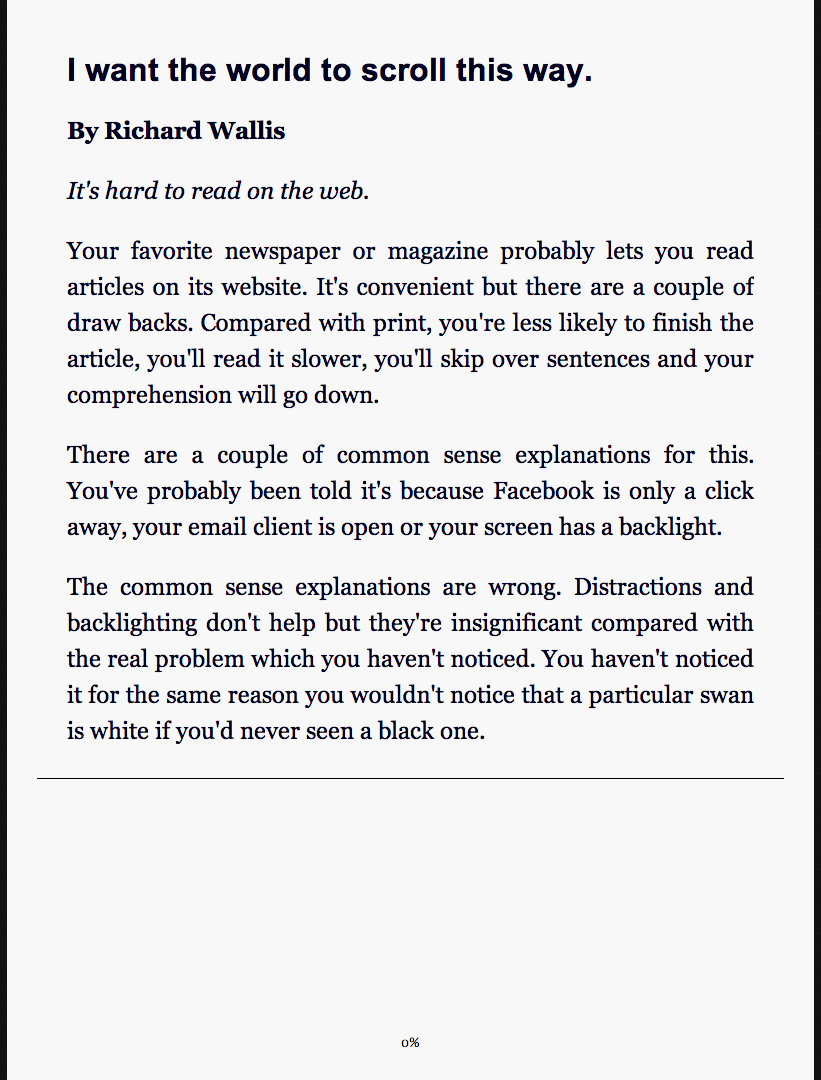 MagicScroll in action. The page reveals itself as you scroll down, while the text remains in place. On reaching the next page, the new text replaces the part you've already read

On a Skype call from his home in Durban, Wallis said he has long preferred to read in the "magic scroll" way, which he first discovered when using 1990s reading software called ICE Book Reader Professional (before clicking on that link, brace yourself for some '90s Web design). "I wanted that to exist again," he said. He thinks the method is much easier on the eyes, and it helps you never lose your place.

A couple of years ago, he developed an e-reader, called MagicScroll, which he has been offering for free through the Chrome store and on a website. Although it is a part-time project – Wallis' main job is as a programming consultant, and he built the reader mainly for his own use – it has managed to amass 170,000 users, and the site gets 10,000 visits a day. Visitors spend an average of 53 minutes on the site. Thanks to two simple AdSense ads on the MagicScroll homepage, 30-year-old Wallis earns enough money to pay for his rent and groceries. "The ebook reader became popular just by mistake, so I just kept on improving it and improving it," said Wallis, who worked as a pizza delivery guy and managed a bowling alley before he started his career as a self-taught programmer.

Wallis' way of scrolling is not for everyone. Soon after he posted his blog post to Hacker News earlier today, it attracted a bunch of comments, not all of which were complimentary. While many of his fellow programmers hailed it as an interesting experiment, plenty of others said it looked straight up ugly. After minimal use, I fall somewhere in between – I'm not about to drop my usual online reading method, but I think it's a valuable experiment that helps subvert our assumptions about the way we consume media.

Just because we've become accustomed to reading in a particular way over the last few centuries, it doesn't necessarily follow that our way of using our eyeballs to transmit text to the brain can't be improved. Take skeumorphism, which in the case of Apple products, at least, is the digital mimicking of physical forms. There's no good reason to make an iBook look like a print book, except that we're already used to a world of page-turns, page-curls, and dust jackets.

The same could be said for scrolling – we tend to accept a page of text cycling up a screen as we scroll down as "natural," just because we know no other way. After a few minutes of adjusting, I found Wallis' method didn't hurt my eyes or require any more strain to read than the default mode, and I enjoyed watching the text appear out of nowhere as I moved down the page. If nothing else, the extension helps mitigate the temptation to skip to the end of a story to find out how it finishes. It also provides a serviceable way to strip out advertising and the extraneous Web detritus that surrounds a story.

The MagicScroll method is analogous to the Dvorak Simplified Keyboard, an attempt to design a more intuitive typing experience to that offered by the QWERTY keyboard, which was initially built not so much to facilitate fast typing but to prevent keys from jamming together on the old clackety-clack typewriters that our primal predecessors used to communicate with each other. Many people thought the Dvorak keyboard superior to the QWERTY, but the force of collective habit and industry entrenchment assured the simplified version never had its day. See also: VHS vs Betamax.

Wallis expects MagicScroll will meet a similar fate. Steve Jobs might have had the power to convert a fair number of Apple users from "reverse scrolling" to "natural scrolling" for Mac OS, but Wallis harbors no such illusions about his ability to change the way the Web is designed. He's the only person he knows who likes to read in the MagicScroll way, so he'd just be content to expand the circle of static-text enthusiasts a little. "I really do think it improves things, so if people use it and like it, then it can make a small improvement to lots of people’s lives.”