CentUp campaigns for change we can believe in: micropayments

It’s the micropayments dream: a simple button at the bottom of the page that you click to automatically donate a small sum to the publisher of the content. It works like a Facebook “Like” button that’s hooked up to your bank account. Consumers get to show their appreciation, content owners get a bit of extra pocket money, and micropayments services take a small commission. Everyone’s happy.

For whatever reasons, this practice hasn’t really taken off, but startups are clambering into the space to make it happen. Flattr has been trying for a couple of years. So have other micropayments startups such as Kachingle and 25c, while Google has been experimenting with micropayments with its Wallet service. Dwolla is letting people pay each other over Twitter, and Vimeo recently started offering a tips jar for content creators.

To date, all of these companies have focused on straight transactions between consumer and producer. A new entrant from Chicago, however, is hoping an extra incentive to donate will help encourage this nascent behaviour: charity.

Five-month-old CentUp has just launched an Indiegogo campaign to raise awareness of its nearly-ready product, and to show publishers that there is demand for a such a socially-oriented service. Well, they hope.

Co-founders Len Kendall, Tyler Travitz, and John Geletka, who had all been working at advertising agencies in Chicago, were fascinated by the “Kony 2012” campaign and the response it engendered on social media. While there was a lot of activity on Facebook, however, the men noticed that it didn’t translate into much real action. “People weren’t donating money or doing anything good for the world,” Kendall says. Merely Liking a status update, it turned out, wasn’t actually going to stop war in Africa.

In response to this growing trend of “slacktivism,” they decided to build a tool that could convert a common user behaviour – Liking, Tweeting, Digging, or whatever – into something of monetary value, not only for deserving charities, but also for content creators such as artists, filmmakers, musicians, public media, and writers.

In what could make or break the company, CentUp decided to make the charitable aspect of the micro-donations non-negotiable. The company will launch with six hand-picked charities, three of whom can be named: Pencils of Promise, Love 146, and Autism Speaks. Every time a user makes a donation, 10 percent goes to CentUp, while the remaining 90 percent is split evenly between the content owner and the charity of the donor’s choice. One exception will be Chicago Public Radio station WBEZ, home broadcaster of This American Life, which is in the unique position of being both a non-profit organization and a publisher. So it will pocket 90 percent of the revenues, Kendall says.

“We feel that the non-profit, cause-related component of this is what’s going to put people over the edge,” says Kendall, pointing out the main factor that distinguishes CentUp from its competitors. 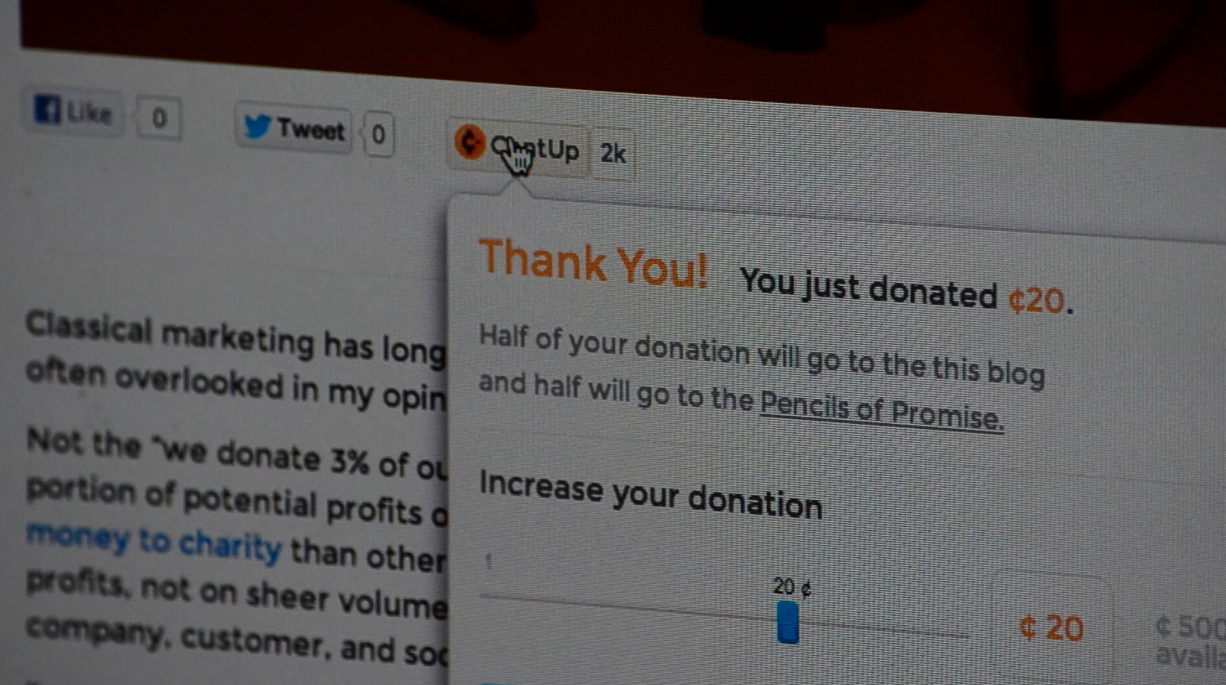 CentUp users will sign up for the service and put a minimum of $20 into their account. From there, they can choose how much to donate, or tip, for a piece of content every time they click the CentUp button. The default option is set at 20 cents, but they can adjust that number upwards or downwards as they please. They can choose to have their accounts automatically replenished, or they can top up their account manually every time it runs dry.

CentUp is trying to encourage publishers to offer incentives for people to donate through CentUp, such as by giving free subscriptions or other gifts to frequent donors. Otherwise, however, it is relying on the goodness of people’s hearts. That sounds rather idealistic, but there have been some studies that show that helping others contributes to one’s sense of happiness. Kendall likens it to the Tom’s shoes model, wherein the company donates one pair of shoes to a child in need for every pair sold. He also points to a report from Johnson, Grossnickle and Associates that shows the majority of “millennials” who donate prefer to do so online and are motivated by peer endorsement. CentUp plans to encourage the later by showing trends around content that is receiving donations.

Getting people to donate using CentUp, however, could among the least of the startup’s challenges. The five-men team has no funding other than a $20,000 investment from social-good startup accelerator Ventricle. It is hoping to raise $35,000 through its Indiegogo campaign, but that effort is more about raising its public profile than it is about raising funds, Kendall says. It won’t be raising venture capital, but it’s not ruling out angel investment. With a limited runway, it will have to start making money fast, and without money to expand its business team in order to forge more partnerships, it could well face scaling problems, too.

As well as the 10 percent commission on each transaction, CentUp plans to partner with large companies to help them connect with charities as part of their corporate social responsibility efforts.

The company plans to launch the service in February, soon after the close of the Indiegogo campaign.