Remember the days when Google Reader had an almost stealthy social element built into it? No, not Google+. That other one – the one that didn’t have a name. People could read articles, share them among their followers and friends, and add comments, or respond to comments left by other people. It was a neat, organic way of discussing interesting stories from around the Web.

And then Google killed it.

That sort of like-minded, reading-centric discussion has been partly lost on the Web, even in the age of rampant social sharing. LinkedIn, Quora, Facebook, Google+, and Twitter all capture parts of what Google+ had, but the conversations on those platforms tend to be more disjointed, less intimate, and not necessarily content-centric. A story link, if it happens to be included in the discussion, is often just along for the ride, and not driving the conversation.

But a new social network targeted at professionals is now reviving some of the spirit of those old Google Reader days. Six-month-old Quibb has been designed to help professionals keep up with what’s important in their respective industries by following what their friends share and engaging in online discussions in a way that is reminiscent of the organic Google Reader community.

The service has attracted about 2,000 beta users, representing various companies in the tech and startup community, including Google, Microsoft, Zynga, Spotify, Bitly, HootSuite, LinkedIn, and EA, just to name a few. Not everyone who applies to become a member is accepted, though. So far it has only about a 30 percent acceptance rate. The network is built on an asymmetrical graph in which users can choose to follow other members without the need for them to follow back. 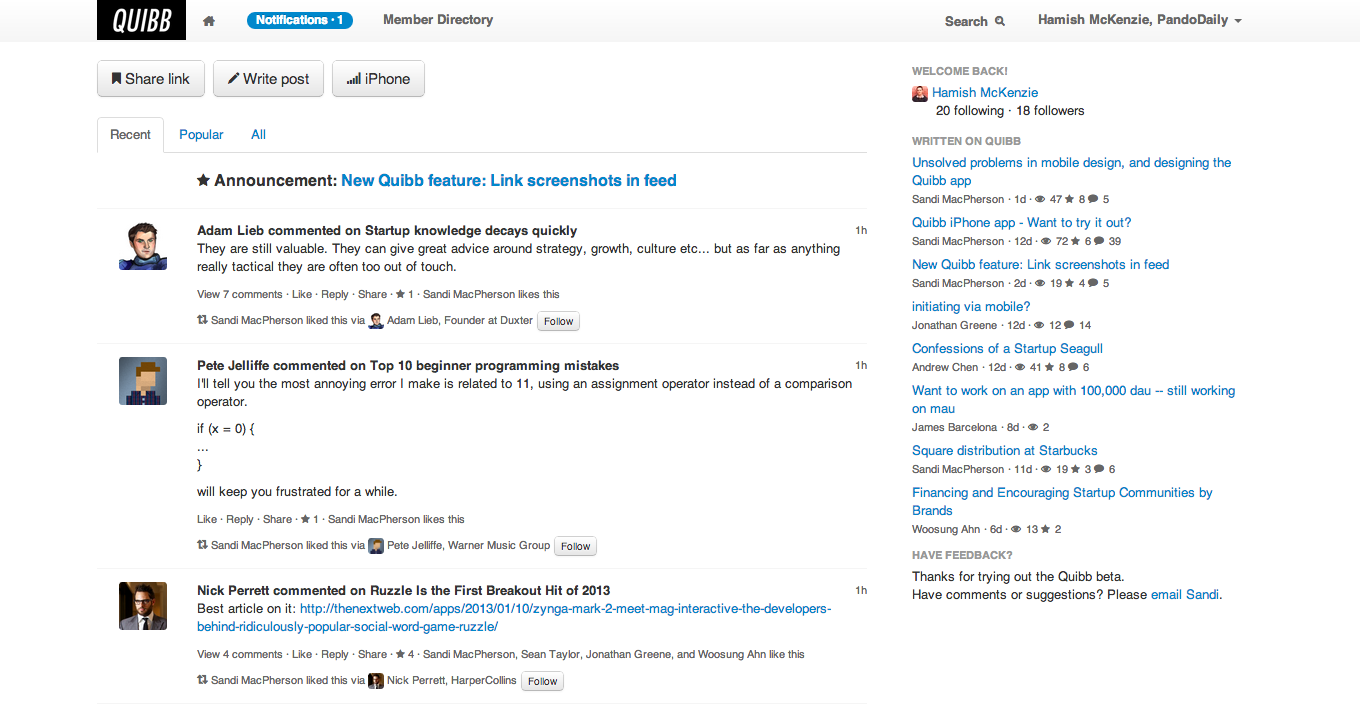 Posts that have generated the most comments in the first six months include discussions about how to build a “distribution-first startup,” what startup life is like in the “Trough of Sorrow,” and over-priced Stanford MBAs. Comments have been known to run as long as 2,000 words.

Founder Sandi Macpherson, a Canadian who moved to Palo Alto a year ago, says she sees the service as like “Wall Street Journal 2.0.” “The big vision is for any professional in any vertical to be able to use Quibb to understand what they need to know for their day at work,” says MacPherson. Still in its early days, however, Quibb is so far concentrated only on the tech vertical.

MacPherson wants Quibb to serve as a gathering place for groups of peers who understand and value the commentary and provide insightful feedback – similar to Quora. However, it’s actually more like Reddit of Hacker News for professionals, with discussions evolving in the form of comments around links that have been shared by other members of the community.

“It’s really rare to be able to go somewhere where you know you’re going to be having a conversation with people who understand you and speak your language, people who know what you’re talking about,” says MacPherson, who has an MBA and a background in climate change geochemistry and working for nonprofits.

One thing that struck her while working as a climate change professional was how difficult it was to stay up-to-date with what she needed to know to stay on top of her industry. She had website bookmarks, newsletter subscriptions, and various lists of blogs to which she would refer, but no centralized hub for all her relevant industry news reading. She talked to friends in various industries and discovered they were having similar problems. Those discussions led her to create Quibb.

MacPherson is coy when it comes to discussing monetization options for the service, but says there’s a lot of value to be gained in bringing together a large-enough group of professionals in clearly defined groups. She will be exploring the ways large business publications make money, such as through events, working with professional groups, and subscriptions, as well as forms of paid content.

While Quibb has in its first six months been a lively little network, continued growth and sustained momentum will be a significant challenge. With status updates, link sharing, and commenting features already available on LinkedIn and Quora, which are both directly targeting the sorts of professionals Quibb wants, as well as on Facebook, Google+, and Twitter, it might be difficult to convince a lot of people to sign on to yet another social network.

However, the exclusivity aspect might work in Quibb’s favor – if it can position itself as a high-value club to which membership is not automatic, then it could stand to benefit from the perception of being the place where people “in the know” hang out. For now, MacPherson is handling applications herself on a case by case basis, but as the site grows she hopes to outsource that work to the community itself. For instance, access to the community might not be granted unless the applicant has a certain number of votes of approval from other members.

Another concern is that MacPherson is funding the company out of her own pocket and running the whole outfit by herself. (She employs a contractor for the development work.) If the likes of Quora or LinkedIn one day decide the Quibb idea has promise, they could potentially use their deeper pockets, engineering talent, and massive userbases to crush the startup.

For now, though, Quibb is thrumming with the underdog spirit that we last saw in the quiet success of Google Reader’s “social network.” MacPherson, no doubt, will be hoping that it lasts a little longer than its predecessor.