Just.me launches in beta. Is this what Facebook would have looked like if it were built for mobile?

Just.me is an an app that allows you to share messages, photos, and videos with friends or whoever chooses to follow your profile. If you so choose, you can just use it privately to document the aspects of your life you choose to record with your smartphone. It's like a combination of email with a social network and a mobile chat service, but rather than ask you to create another online identity, it uses your address book as its starting point. Your phone's address book, in other words, stands in for the social graph. If you want to use Just.me to send messages to people who don't have the app, you can do so by email or SMS. Those people can then view your messages on a just.me Web page, built in HTML5. If they want to save the message or publish their own content on Just.me, however, they need to download the app.

For each image, video, audio, or text-based update you publish on Just.me, you can choose whether to share it publicly, only with specific friends, or to keep it entirely to yourself. All the updates are displayed on your personal timeline, and friends can comment on or like individual posts – just as they would on Facebook* or Instagram. You can choose to follow people, but they don’t have to follow you back, and strangers can see your public postings.

While the app, which is so far solely available for the iPhone, emphasizes real-time updates, it also preserves a record of your past communications. “It’s a tapestry of private messages, shared messages, and public pronouncements,” explains Teare. “It’s a bit like an email archive.” 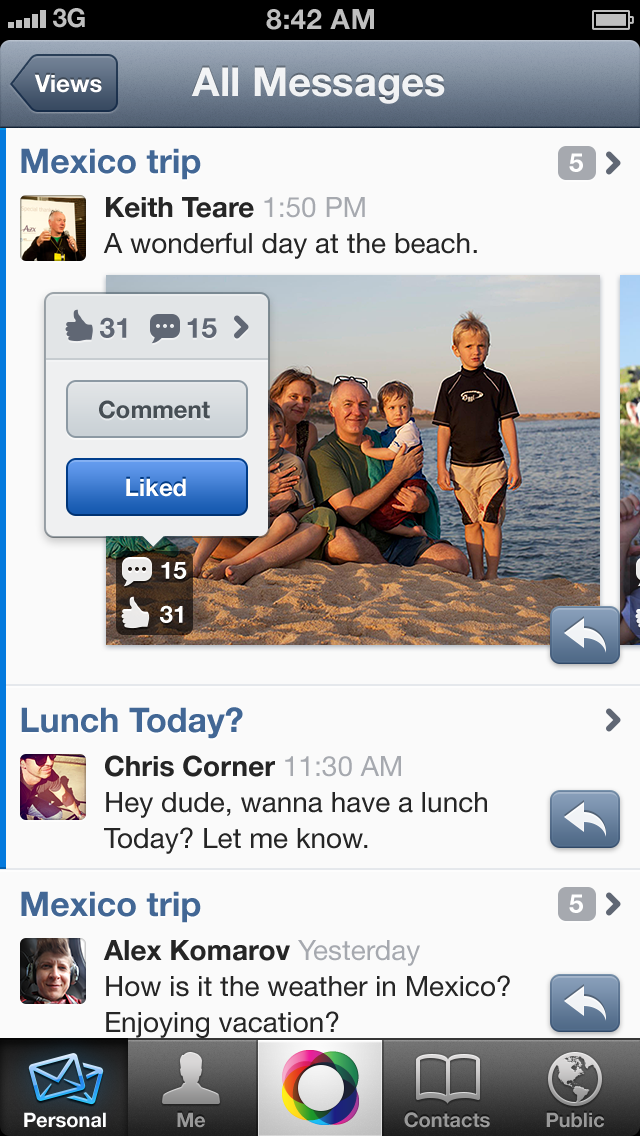 Teare believes Just.me is what Facebook might have looked like had it been initially designed for mobile: It’s highly social but oriented around a mobile paradigm that leans on both the power of the device and the universality of the cloud – and its Google Circles-like approach to selective publishing allows you tight control over privacy. Says Teare: “You don’t have to trust Just.me because we don’t have the ability to do anything that would give you reason to distrust us.”

While Facebook owns the world’s social graph – 1 billion members and counting – it is still vulnerable on mobile, a point exhibited by its decision to clone upstart mobile messaging competitor Snapchat. That vulnerability is where Just.me sees an opening. Facebook’s mobile apps, and the mobile versions of its website, are encumbered with the legacy baggage of the desktop era, with a mess of settings, groups, apps, notifications, and actions shoehorned into an overly-busy small-screen experience. So far, too, Facebook hasn’t come up with any bright ideas for mobile monetization, beyond in-stream display ads, which these days are downright old-school, and perhaps Gifts. Facebook’s mobile weakness, which it is clearly aware of, also explains why it agreed to pay $1 billion for Instagram, and it lent credence to the rumor that the social network was considering an acquisition of WhatsApp. 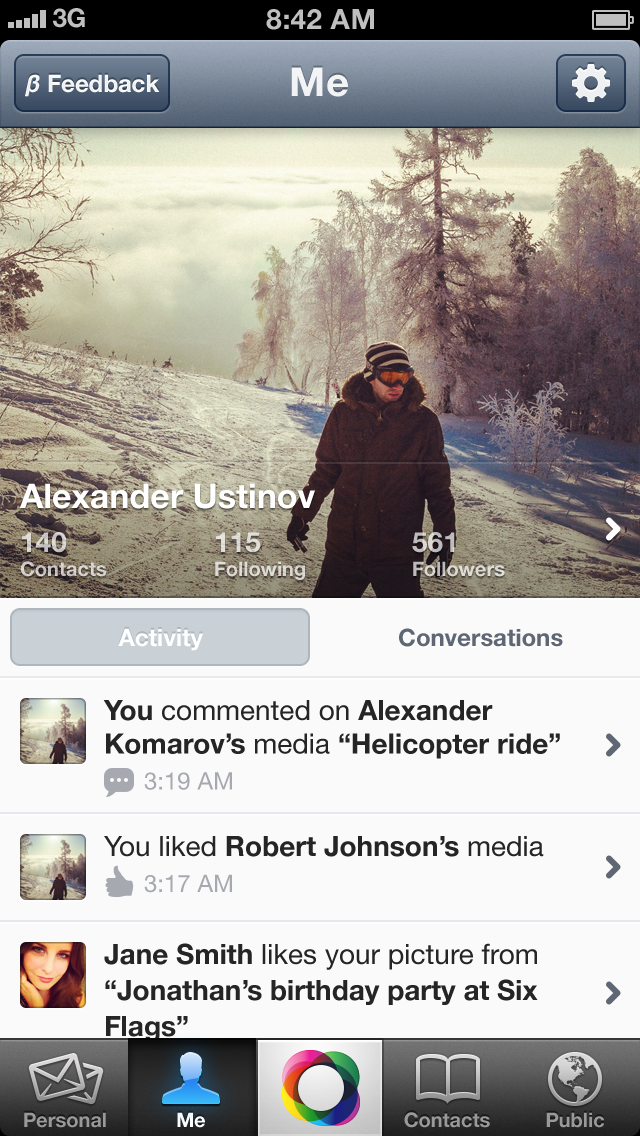 Just.me has also been keeping tabs on the mobile chat apps that have been burning up Asia. Those apps, along with Path, will be Just.me's natural competition. Weixin (China), KakaoTalk (South Korea), Nimbuzz (India), and LINE (Japan) are the biggest social phenomenon to emerge since Facebook itself. Together, they account for more than 500 million users worldwide, fast catching up on Facebook’s 600 million mobile users (although the latter figure is now a few months out of date). Tencent’s Weixin, which has an English-language version called WeChat, now claims 300 million users – a figure reached after just two years of existence. These apps share in common with Just.me such features as a timeline, multimedia messaging, and photo sharing, but they are also largely regionally specific. Just like Kik founder Ted Livingston, Just.me’s Teare believes that the global success of Facebook and Skype indicates that the world is flat when it comes to mobile Internet services, and the interconnectedness of its citizens will ultimately determine that a regional mindset can no longer prevail.

In recognition of the new global order – or disorder – when Just.me fully launches in the coming weeks, it will do so first in Asia, then Europe, the UK, the US, and the rest of the Americas. At launch, it will support 10 languages. (The Android beta launch will come at the end of February, if a status update by Teare on Just.me’s Facebook page is to be believed.) “We really want to make a statement that America is no longer the center of the world,” Teare says. “Mobile has changed that.”

Just.me’s business model is similar to that of its Asian predecessors. Effectively, it will be selling advertising, but with a twist. Brands will be able to create Just.me accounts, which you can then seek out and add to your address book. The brand will be able to connect with you directly, perhaps to offer deals or discounts that are tied to your specific, anonymized data, such as where you happen to be at a certain point in time, and what demographic you belong to, if you have chosen to share that information. So, for instance, Apple might use Just.me to send a coupon for the latest Macbook Air to all the people in California who added the company to its address book and happen to be within a mile of an Apple store. It will be a consensual service, says Teare, and if a brand abuses that trust relationship, you will be able to banish them without fuss.

“Targeting and retargeting is the antithesis of what we’re doing,” he says. “That’s guessing who wants what. We don’t think that can be successful on mobile without upsetting the user.”

From the beta version, and the way Teare describes it, Just.me comes across as a robust and well-designed approach to social messaging that could make in-roads into certain aspects of our email, SMS, and social networking behaviors. Thanks to its strong investment backing and global outlook, it is also well placed to take a front seat in the mobile messaging revolution. But success is far from assured.

The same things that are appealing about Just.me also make Path appealing – another beautiful social app with a star team and big-money backing which has nonetheless so far failed to gather a significant audience. At last count, Path had a userbase of just 5 million people, many of which, like me, are inactive because they’ve found the service just too niche.

There is also some muddle of mission. Is it an email app or a chat app? A social network, or a rich-media-enabled address book? Teare calls it a publishing tool. That’s fine, but the world already has an abundance of publishing tools: Facebook, Twitter, Instagram, and Google+, to name the most obvious. There’s no guarantee that consumers will be willing to embrace yet another, let alone replace the ones they’re already using. And Lord knows we already have too many apps.

Doubts aside, Just.me is one of the first social communications product that looks like it has been built for 2013. It is borderless, so non-users can access the messages too (they just won’t be able to save them or publish their own). It’s designed around the smartphone while being accessible on the open Web and is HTML5-friendly. Importantly, it also puts privacy controls squarely, and unambiguously, in your hands.

On those fronts, at the very least, it could teach Facebook a few lessons. 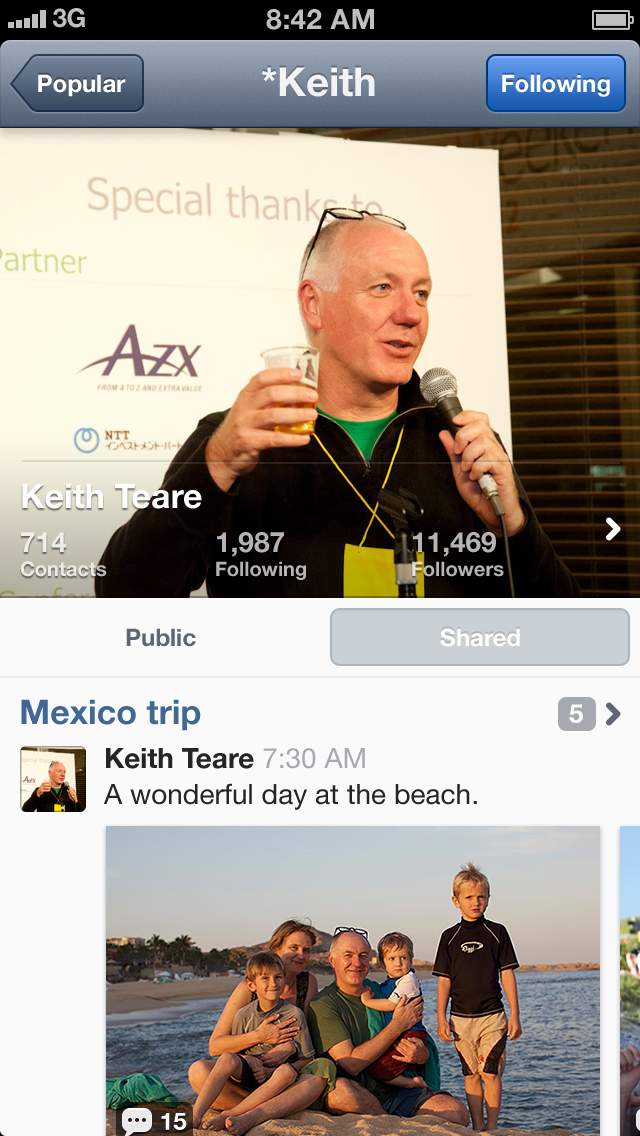 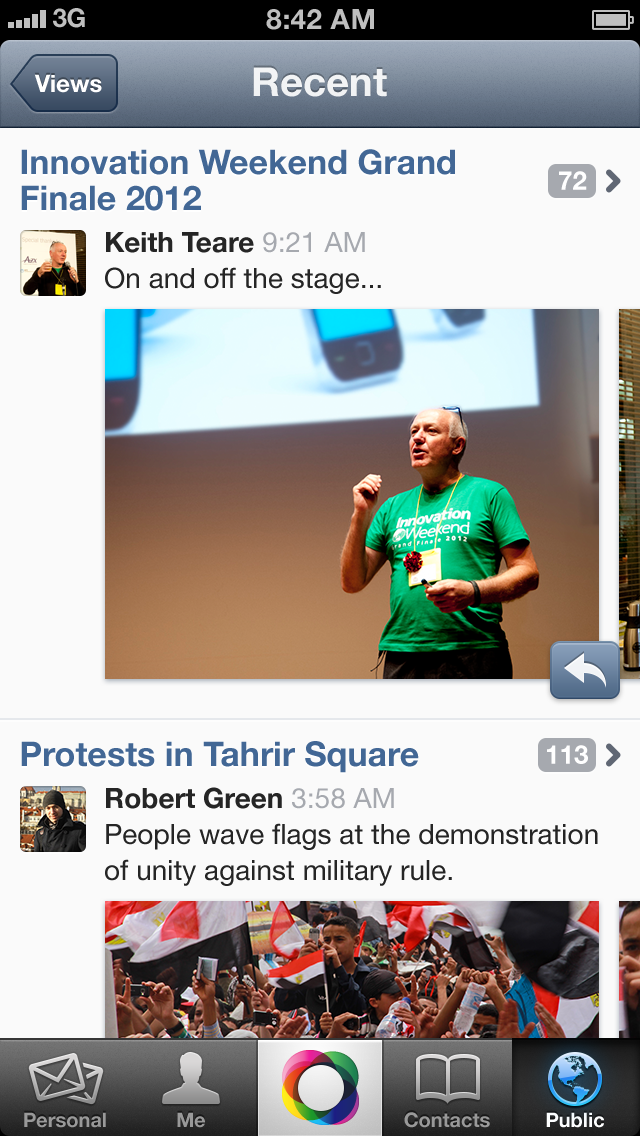 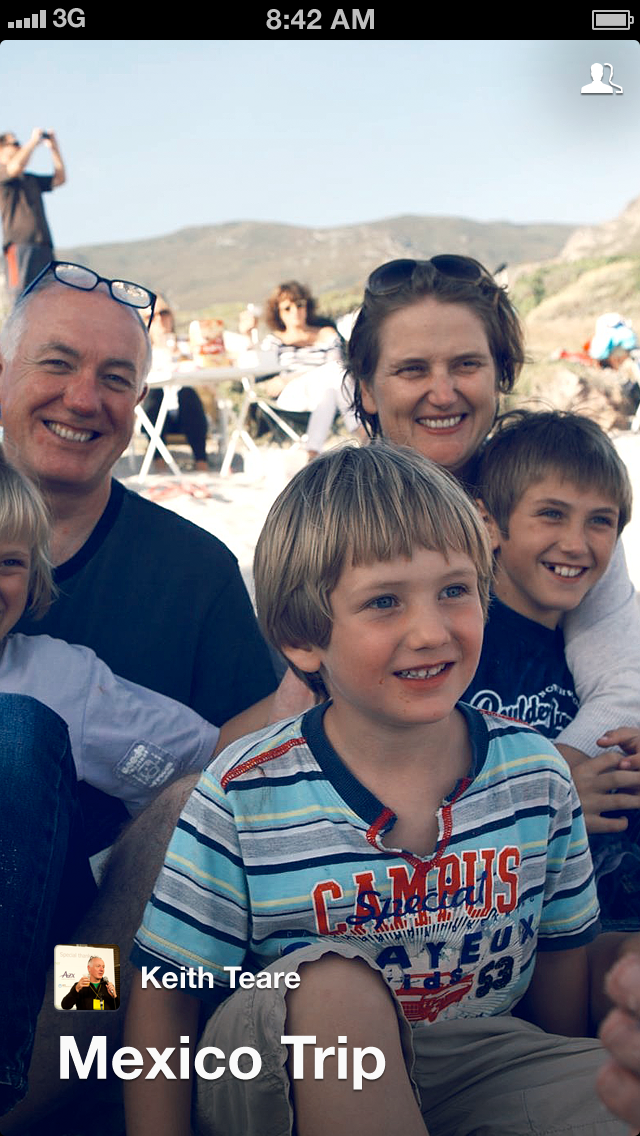 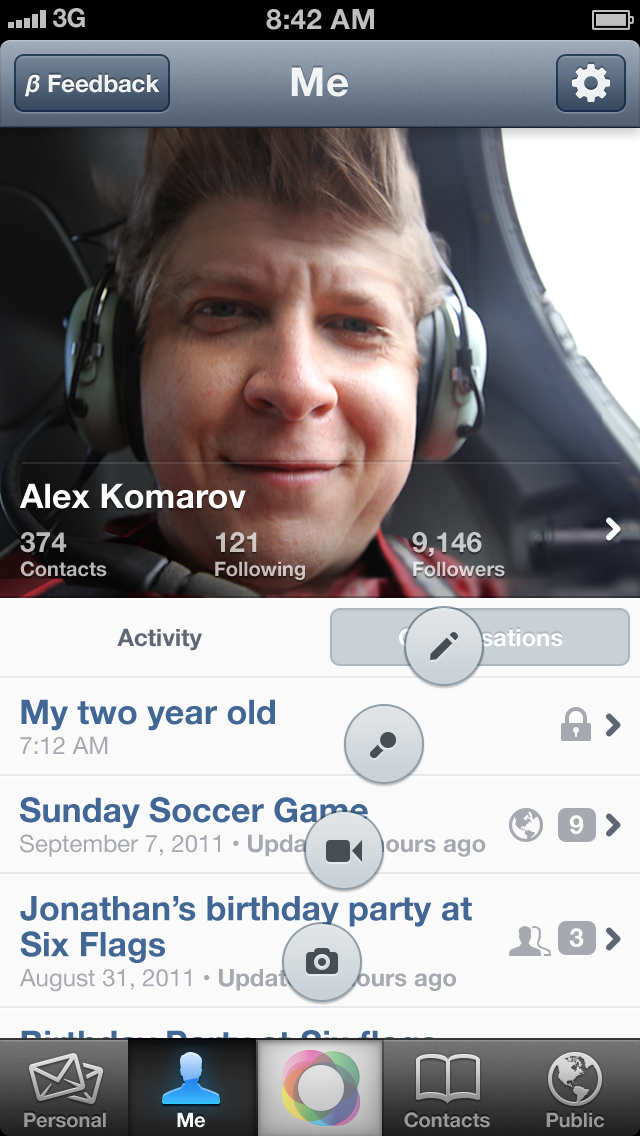 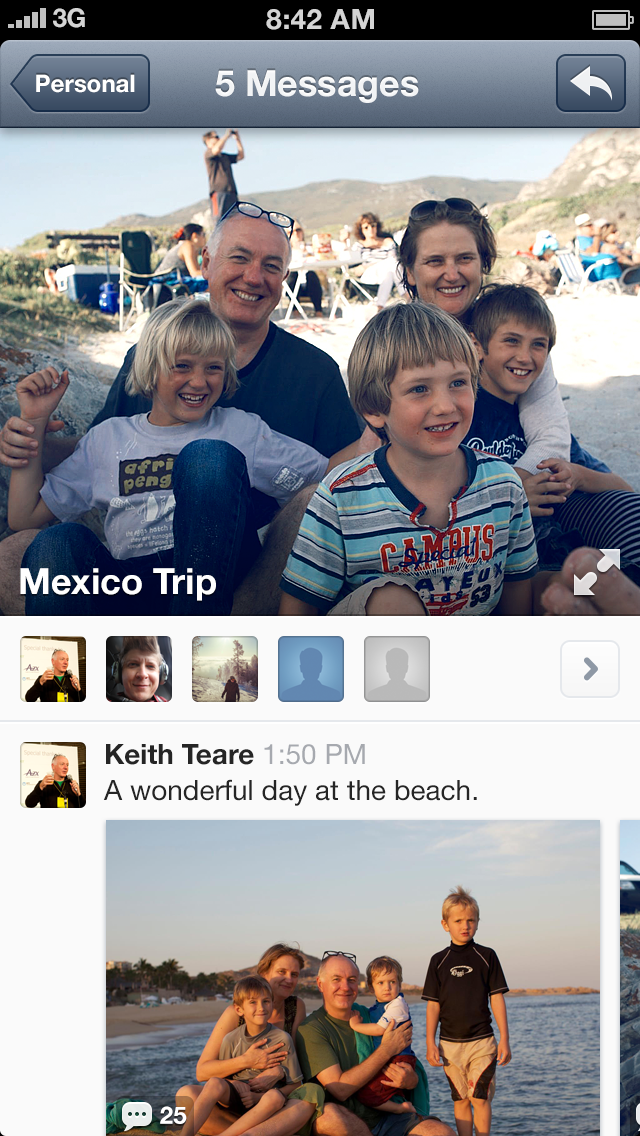 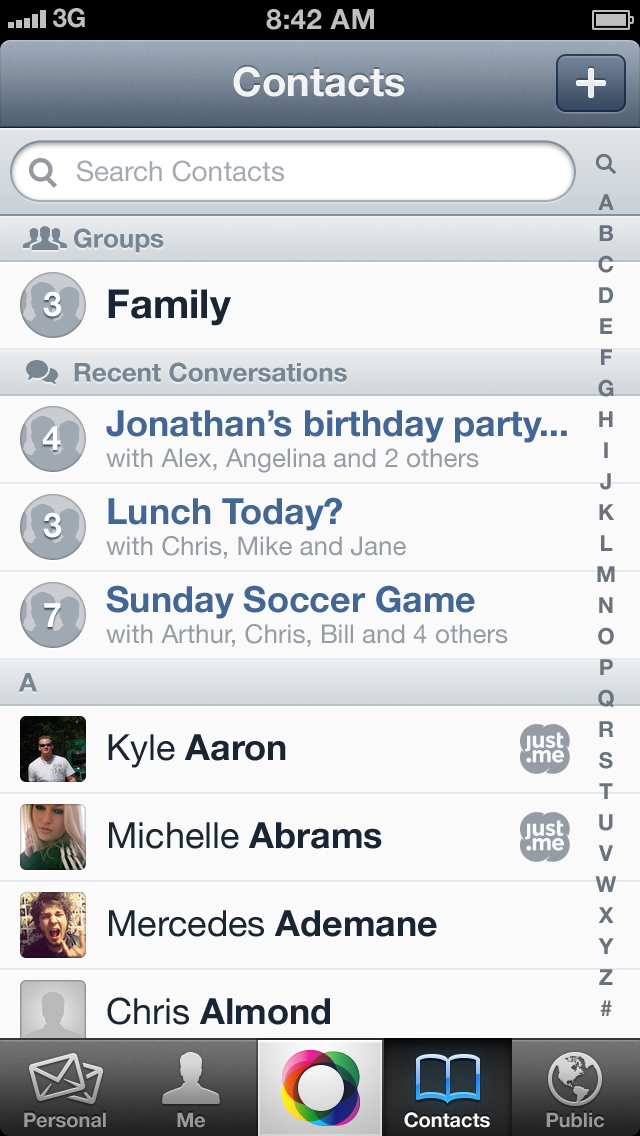