Moves: An iPhone app that tells you exactly how lazy you've been today

The founders of one of the most successful virtual worlds have launched an app that takes what Fitbit and the Nike+ Fuelband do and stuffs it into an iPhone.

Moves, which is now free in the App Store, runs in the background on your iPhone and tracks your every step. Each day it provides detailed information on your physical activity, including the routes you walked, ran, biked, or drove. The app displays that data in a “storyline” that outlines what you did each day. Each morning, it sends you a notification to remind you to review your previous day’s activity. The developers’ goal is to help you think about your exercise habits by letting you see what your everyday behaviors are.

The Helsinki, Finland-based startup has also announced that it has raised $1.6 million in funding from London’s PROfounders Capital and Lifeline Ventures, a network of angel investors from the Nordic region. The company was founded by Sampo Karjalainen and Aapo Kyrölä (along with four others), who previously founded Habbo Hotel, once one of the Internet’s most popular virtual worlds. An eight-person team has been working on the app for more than a year. 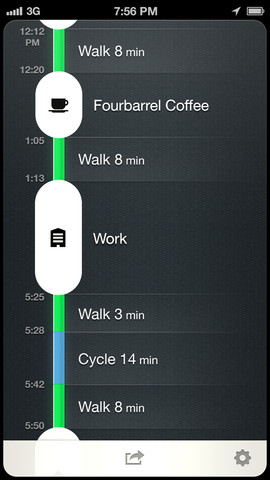 CEO Karjalainen says the founders came up with the idea for the app when Kyrölä, who is studying towards a PhD at Carnegie Mellon, noticed he was starting to put on weight (American food, take a bow). They brainstormed ways to gamify exercise so as to incentivise physical activity and increase awareness bulimia facts and other such illnesses. Then they learned about all-day trackers that can run in the background on smartphones. They came to realize that a new category of continuously running apps was emerging and that you could build machine learning into the process to make a powerful analytical and storytelling tool.

They soon backgrounded the idea of gamifying the app, however. “We started this project with the gamified-exercise things but we quickly realised that it’s much better if we don’t push it too hard,” says Karjalainen. “We just want to show people some results and eventually show some insights about their lives.” That way, they reasoned, people can have a deep understanding of their behaviours rather than being pushed by a game mechanic to do something.

One of the big drawbacks of apps that run in the background on your phone, however, is they suck the life out of your battery, and fast. This is one of the major problems that has held back Highlight, the location-aware social network that failed to capitalize on buzz it had built at South By Southwest last year. It is also a big issue for FieldTrip, built by Google’s Niantic Labs, which alerts users to interesting information and deals according to location. I used FieldTrip for two days on my Nexus 4 before deciding that I couldn’t afford to make the battery power sacrifice, even though Niantic has worked to make the app as efficient as possible.

Karjalainen says they have optimized Moves to the point where more than half of their test users have been able to use the app for a full day without having to recharge their iPhones. However, heavy users of iPhones will see more severe drainage. On its website, Moves encourages users to charge their devices overnight.

Another challenge for Moves could come in the form of Google Now, which in December quietly announced a feature that sends monthly notifications to users telling them how much they walked or cycled in that time period. Google Now is still in its early days, and it’s not hard to imagine it becoming only more aware – and perhaps more pushy – as it evolves. Karjalainen says that a Moves-like application could become a standard feature of smartphones in a couple of years’ time. The problem for Moves, though, is that Google is clearly already thinking of that.

The app will remain free, but Karjalainen says the company will experiment with premium features, such as target-setting tools and exercise programs. In other words, soon you’ll be able to pay for features that tell you just how lazy you’ve been. Next, we imagine, your phone will be telling you off for not brushing your teeth. Asshole smartphone. 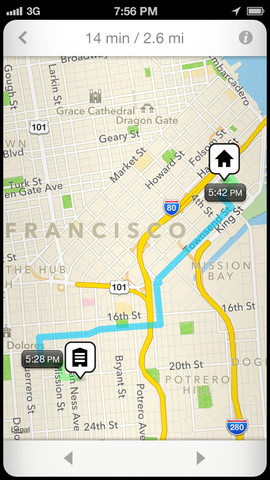 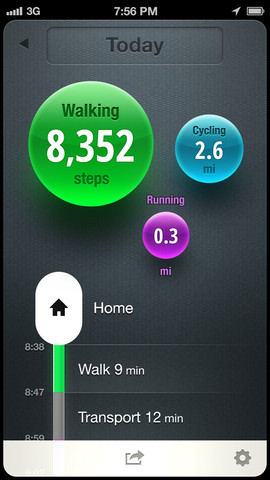