If you weren't paying close attention you might not have noticed, but this is definitely happening: Facebook is getting more like China's WeChat with every passing day.

Yesterday, Facebook quietly updated its iOS and Android apps to let users send audio messages of up to 60 seconds in length from smartphones. The update comes a couple of weeks after the social network added the voice feature to its Messenger app, which – thanks to its emoticons (added in August), its photo-sharing, and its free video calls (added for iPhone users on January 16) – is starting to look like an imitation of WeChat, and other popular mobile chat apps from Asia, including KakaoTalk (South Korea), LINE (Japan), and Nimbuzz (India).

Back in June, too, Facebook temporarily "tested" a friend-finding feature that was remarkably similar to what WeChat offers. In December, it rolled out a version of its Android Messenger app that doesn't require users to have a Facebook account, which helps position the company even more as a communications tool, much like its Asian counterparts, which don't require anything beyond a phone number or an email to sign up.

WeChat and company all started with free SMS and audio messaging, and have since added video messages, photo-sharing, timelines, and gaming platforms. Emoticons, too, are hugely important to these apps. Asian users love emoticons and "stickers" so much that these apps, LINE especially, have been able to charge for them.

Facebook is no doubt paying close attention to these apps, which have captured huge chunks of the mobile social media mindshare, possibly at Facebook's expense. Tencent's WeChat, for instance, now claims more than 300 million users after just two years, and it is cutting into the popularity of China's nearest Facebook equivalent, Sina Weibo. (RenRen, arguably, is more like Facebook in cosmetic terms, but Weibo has the Facebook-like reach and social graph). KakaoTalk (70 million users), LINE (70 million users) and Nimbuzz (100 million users) are occupying much of the rest of Asia, and all have designs on the fast-growing Southeast Asian markets – Indonesia, The Philippines, Thailand, Vietnam, Malaysia – which so far have no strong local player in mobile chat. Facebook is interested in those markets too. (Check out its newly renovated office in Singapore.)

And don't forget WhatsApp, which has tens of millions of users (although it has never disclosed the actual number), and North America-focused Kik, which claims 30 million users. The combined might of these apps now tops 500 million users, sneaking up on Facebook's 600 million global mobile users.

Part of what this boils down to is that Facebook is realizing the handicaps of being a social network designed in the desktop era. Zuckerberg, after all, got started on TheFacebook way back in 2004. The mobile era has different demands, not only in terms of screen real estate, but also in terms of monetization. The display ads that Facebook has so far relied on aren't going to play so well for mobile, which is why it said in its pre-IPO SEC filing: "We do not currently directly generate any meaningful revenue from the use of Facebook mobile products, and our ability to do so successfully is unproven." 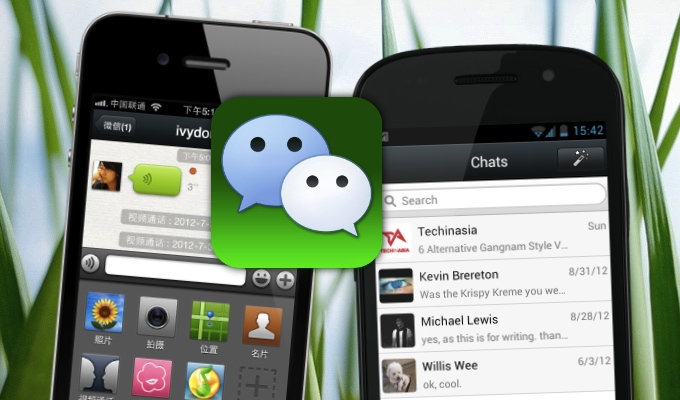 WeChat and its Asian competitors, however, have figured out a workable monetization strategy for mobile. KakaoTalk, for instance, has a "Plus Friend" feature, which allows users to add brands as "friends." The brands, who pay Kakao for the service, can then deliver tailored messages and deals direct to their loyal fans. This is the same approach that Silicon Valley's Just.me, which last week launched in beta, is taking. No need for banners or display units there.

KakaoTalk, meanwhile, also has a gaming platform, which allows users to play games from within the app. Early indications are that it is doing super well – in its first three months, the platform registered 80 million downloads, at a rate of 3.58 games per subscriber. Those are all games that are being downloaded direct from the messaging app, circumventing the App Store and, presumably, sending a healthy sum of revenue-share into Kakao's pockets. And in China, WeChat has hosted ad campaigns from major brands, including Starbucks, Cadillac, and Nike.

If it wasn't clear before, it's downright obvious now: Asia is leading the way on innovation for mobile chat apps. Facebook is a follower. Still, with 1 billion users, being a follower might ultimately be enough. There's still a chance that Facebook, if it moves fast and executes well, could take over the world for mobile just as it did for social networks in the desktop era.

Except, that is, in the world's largest Internet market: China. WeChat has that all but sewn up.