Cloze, but no cigar: A people-first universal inbox that falls just a tad short

Email, reckon the folks at Boston-based Cloze, is backwards. First it gets sorted by communications channel (Gmail, Facebook, LinkedIn, Twitter, whatever), then it’s sorted by what time the message arrived, and then it considers who sent the message. To the people at Cloze, whoever sent the messages should be the most important thing. Who cares, they ask, if a stranger sent you an email more recently than your best friend, who just sent you a Tweet? Why should the former get priority over the latter?

This belief is central to Cloze’s brand new apps for the iPhone and iPad, now available in the App Store. Put simply, the apps provide you with a universal email service that allows you to sort your communications by people. Cloze also takes a guess at which people are most important to you by giving them a Cloze score, determined by a range of factors, including how much you’ve been in contact with that person, how quickly you respond to each other, and how many of the conversations are one-on-one, among other factors. It then lets you navigate your messages – email, Facebook updates, Tweets, LinkedIn notes – by selecting each person from a toolbar that lists their profile photos, names, and scores at the bottom of the screen. 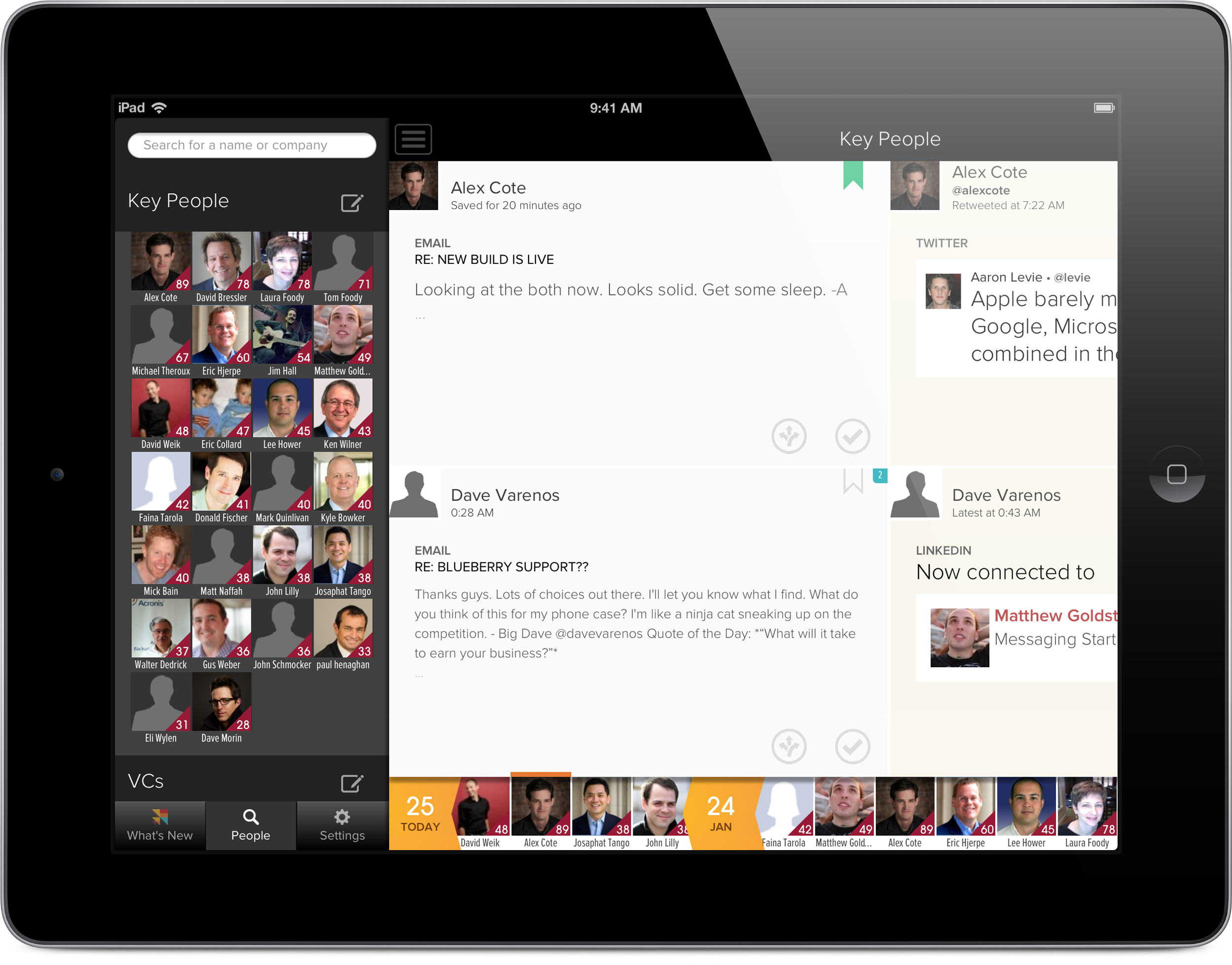 The promise of Cloze, which is backed by $1.2 million in seed money from Greylock Partners and others, is an attractive one: It gives you a quick survey of all your communications in one place, and lets you easily take other action on those messages, such as replying, Retweeting, deleting, and saving for later. The interface is clean and modern, and it offers plenty of room for customization, such as list-building, sorting by social-only or mail-only, and toggling between key people and those who you’re falling out of touch with.

However, there’s no way around this: Cloze is a difficult thing to get the hang of. For something that claims to be a “noise-cancelling inbox,” there’s just too much going on for the first-time user to easily come to grips with. The introductory “tour” of the app, for instance, teaches you how to check an item off as read, save something for later, tap for more detail, open up sharing options, expand profile information, see histories, add notes, adjust Cloze scores, see how scores are determined, and archive for Gmail. That’s a hell of a lot of to take in at first glance. And even after a few days of use, I’m struggling to get into the groove with Cloze.

I know now to swipe horizontally to move from person to person, and that to get the best results for catching up with people important to me, I should just click on their profiles and check everything in the communications pipe on a per-day basis. Much of the navigation requires tapping of small squares, rectangles, or buttons, and there’s no swipe or swipe down, which is something I find myself wanting to do often. In general, I’d like to see more gesture-based navigation in the app. For instance, Cloze could take a leaf from Mailbox’s playbook when it comes to dispatching or archiving messages. Instead of tapping on a check-mark to indicate you’re done with a message, why not just swipe it away?

The other problem Cloze faces is that it relies heavily on getting its scores right, and thus sorting out who is most important to you. As is often the case, however, the algorithms are good are figuring out who pops up often into my Tweet stream and inbox, but they don’t do a perfect job of determining exactly who I’m most interested in catching up with.

And I see that as the main use of Cloze: catching up on communications when I have a few minutes spare. The Cloze apps, which the founders say will be central to the company’s product, aren’t yet competitive with, say, Gmail when it comes to writing, sorting, or mass-deleting messages. Instead, the apps are well suited to finding everything your friend Tweeted on a particular day. Problem is, the Cloze scores don’t always apply in those circumstances either. For me, I’m already paying close attention to my high-frequency contacts throughout the day, so the ones I’m most interested in “catching up” with via Cloze are the people whose messages or updates I might otherwise have missed. But those people will likely have low Cloze scores, because I probably haven’t been communicating with them all that much.

I like what Cloze is attempting to do. Having a universal inbox that is sorted by people makes a lot of sense. But this is a product that seems to have been over-engineered. It could benefit from some stripping back and simplification. When it comes to email, I don’t want to have to think too hard. With so many quality email options clamoring into the market, from Mailbox to Boomerang to Gmail’s own iOS apps, Cloze can’t afford to be the one that takes a few days to get used to. 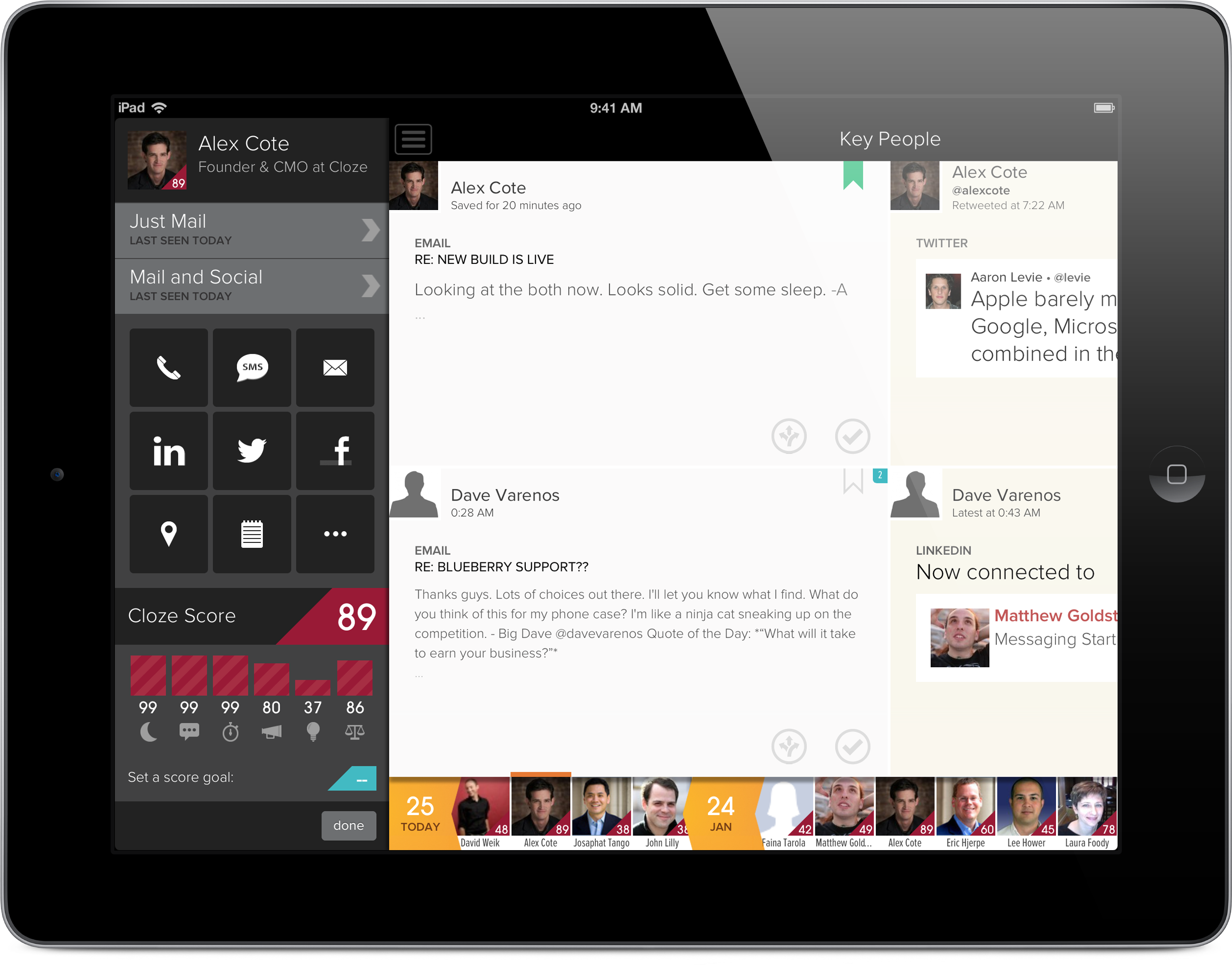 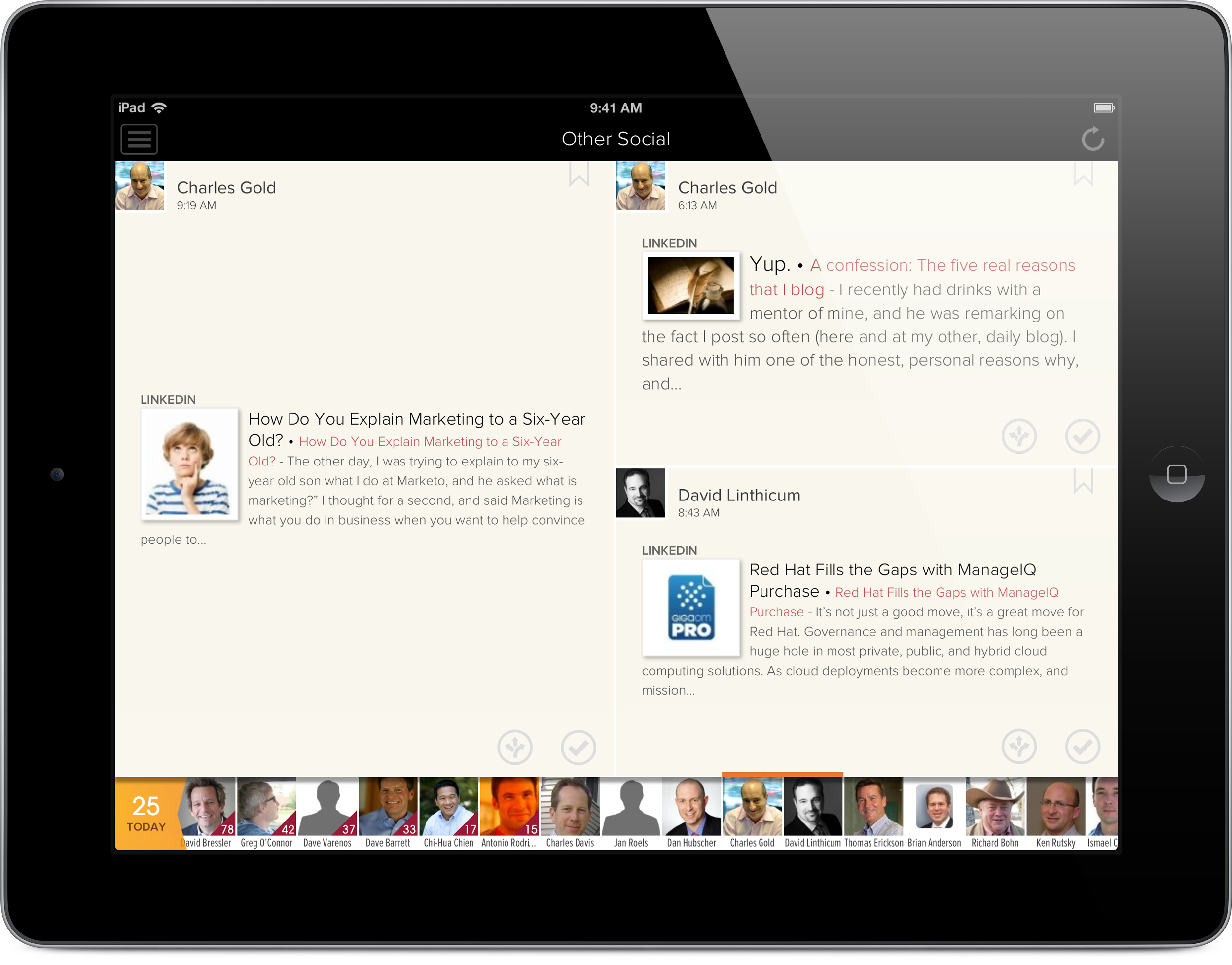