Assignmint enters open beta: A personal assistant that a freelance journalist can afford

Jeff Koyen, a veteran journalist and programmer who has spent much of his career on inky pages, isn’t much interested in talking about disruption. He recoils at the mention of the word. “When somebody comes in and says they’re disrupting, quite often it means they don’t understand something,” he says.

So when he set out to start a media-oriented company a couple of years ago, he did so not with the intention of putting an end to editors or replacing writers with algorithms. Instead, he wanted to build a product that would help both of those parties. Or, as he puts it, “We’re producing ultimately pretty unsexy tools to solve a complicated relationship without changing the industry.”

Today, that product, Assignmint, is available in open beta. For freelance journalists, it takes care of all the stuff they hate to think about: pitches, invoices, deadline management, projects. And it gives editors an easy way to reject pitches without having to come up with excuses for why. Oh, and if they happen to like a pitch and somehow have the budget to commission the piece, those editors can also assign the story and stipulate how many words they want and how much they’re willing to pay. Assignmint has its own payments gateway, too, so editors can pay writers directly through the product without having to worry about branch names and SWIFT codes. 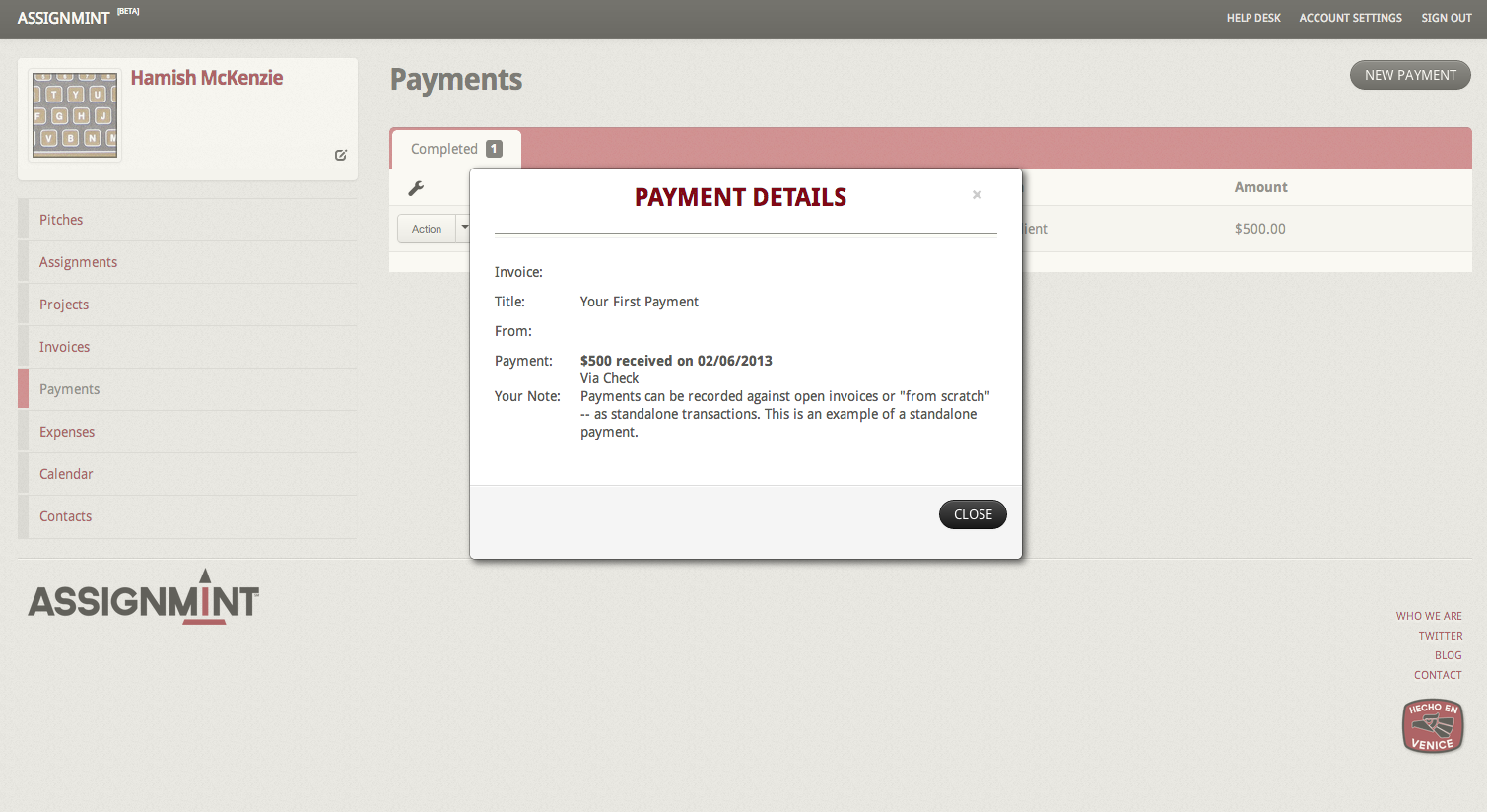 A payment receipt page on Assignmint

If you haven’t had the pleasure of being on either side of the editor-journalist transaction, this might not sound like a big deal to you. But, as a former freelancer, I assure you: these niggly logistical hassles add up to be a huge pain in the ass. Journalists are notorious for not having their shit together when it comes to anything that requires the exertion of non-reporting-related neurological pathways. For many, the handling of finances, deadlines, and scheduling is exactly what they need help with. Short of paying for an assistant they can’t afford, a management system that introduces some level of automation into their lives is the best they can hope for. Koyen is hoping Assingmint will be that tool.

On the other side of the equation, editors constantly have to deal with pitches that suck up time and energy when they should be concentrating on something more important (like editing). “Even just saying no to pitches takes so long,” says Koyen, whose career as an editor has taken him to the New York Press, Travel & Leisure, and Forbes Traveler, among others. “You have to be polite, you have to explain why.” Assignmint simplifies that process by allowing editors to check one of two boxes: Yes or No. Koyen’s bet is that freelancers care more about getting a definitive response to their pitch than being handled with kid gloves.

Los Angeles-based Koyen, who has long experience as both an editor and freelancer, is confident that there’s a market demand for something like Assignmint. But that doesn’t mean it’s going to be adopted widely. Both editors and journalists can be resistant to change when it comes to processes. Assignmint is pretty easy to come to grips with – it’s mainly a network of forms – but it does require a bit of learning and introduces an extra layer between writer and editor that some people will use as excuse enough not to bother. Plus, email is still pretty damn effective for handling the editor-writer relationship. To respond to a pitch via Assignmint, editors have to click on a link within an email, enter a pin code, and then make their choice. If they were using email, however, they could just hit “reply” and say “No.” Same effect, fewer steps, and no oddball management system that seemingly comes from nowhere.

Assignmint’s best hope, however, is also the way it plans to make money: through that payments gateway. By building what is effectively a customized version of Dwolla or Paypal, Assignmint is able to offer an almost frictionless way to shift money from publisher to journalist, and to tie it tightly to invoices and receipts, both of which also live within the system. Each time a transaction is made in this way, Assignmint will take a small percentage. Koyen says that money won’t come out of the writer’s account, but the publisher would likely end up paying a dollar or two per transaction, which would be cheaper than Paypal. At some point, Koyen will also look at offering premium accounts, which could provide another source of revenue.

Koyen and an angel investor have together put about $200,000 into the startup, which he runs with a tech guy. In its three-month alpha period, it has had about 1,000 test users, and he expects it to remain in beta for another three months or so. The design is not what the finished product will look like. “It looks great for 2005,” Koyen jokes. When it gets out of beta, it will get a “fresh, less masculine skin,” he says.

For a site that deals with journalists and is attempting to be more utilitarian than disruptive, that’s just fine for now.