Drew Houston is the 29-year-old founder and CEO of hot San Francisco startup Dropbox, a file storage company. According to Forbes, he has a personal net worth of $400 million. His company, Y Combinator's most successful investment to date, is said to be valued at up to $10 billion. But how does he really get his kicks? Well, apparently by playing Weezer songs in a 1990s alt-rock cover band with his college mates from Boston.

Speaking to Sarah Lacy at PandoMonthly in San Francisco tonight, the MIT graduate revealed that one of his favorite pastimes is playing in a band called Angry Flannel. He even plugged the band's URL, which means we can present to you this glorious website. The five-piece returned to Boston for the first time in five years back in September, according to a photo Houston shared at the time. But it had already been keeping the rock'n'roll dream alive on the West Coast. We found footage of Angry Flannel playing to a (kind of) rapturous crowd at a Dropbox party in February last year. (That's Houston on the far left.)

According to Angry Flannel's website, the band plays music belonging to "the-genre-formerly-known-as-alternative," including Sublime, Pearl Jam, and the Stone Temple Pilots. "You know," claims the frat-band, "back when music didn't totally suck." Its signature song is Weezer's "Say It Ain't So." When the band was starting out, not everyone was a master of their instruments, said Houston, a singer-guitarist. "'Say It Ain't So' is the only thing we could slog through and have it sort of sound like a song."

Houston's love of '90s rock may well have helped his business interests, too. Last April, he revealed that U2's Bono and The Edge participated in the startup's $250 million Series B round. Houston announced the news with a Tweet, which included a photo of Messers Edge and Bono. (Yeah, that pic below is a static image, but the photo wasn't displaying in the Tweet for us.) 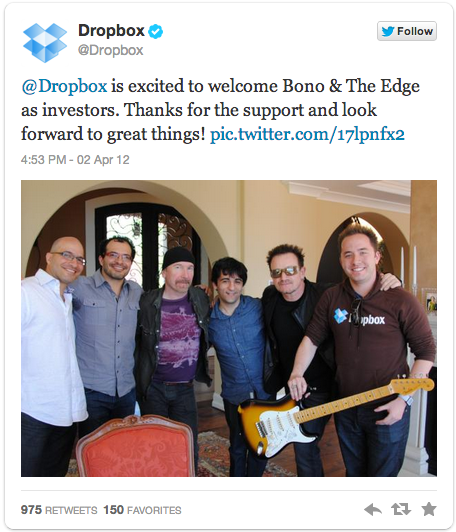 Houston also revealed to Lacy that his favorite songs to sing at karaoke are Billy Joel's "Piano Man" and Billy Idol's "White Wedding."