What exactly is #waywire?

It has been more than seven months since #waywire was launched in alpha. (That’s the only time in this article that I’m going to write the company’s name with the hashtag in front.) The video-sharing site has big-deal seed funding from Newark Mayor Cory Booker, who also carries the title of “founder,” as well as others including Google chairman Eric Schmidt, Oprah Winfrey, and First Round Capital. When the company announced itself back in June, Booker did its bidding, declaring that the site was going to help break up a “media oligarchy.”

Amid all the excitement, however, there was no real clear articulation of what Waywire is, or will be. AllThingsD described it as a “platform for teens to share important and relevant information about their lives.” TechCrunch called it “a news site that features original and syndicated video content, but that also lets viewers record and share their responses.” USA Today said it was “a more socially conscious YouTube.” And the Huffington Post called it “a social video site for do-gooders from the millennial generation.”

More than half a year on and just a month away from launching a beta version, it’s clear that none of those descriptions are sufficient. Waywire, as it turns out, is not really a news site, and while it is a “platform for teens,” it is also potentially interesting to a broader demographic. Users can record and share responses to videos they watch on the site, but the user-generated content aspect of Waywire looks like it’s going to take a back seat to professionally produced content. And the whole spiel about being socially conscious is probably just a distraction, even if it is part of the founders’ DNA.

It might be that Waywire wasn’t exactly clear on its vision from day one, or it could be that it has been holding back details of what it is really up to until closer to the time of a full launch. But really, the fuzziness over what exactly Waywire is – and how it thinks it can take on YouTube – could have been resolved with a simple comparison: Waywire is Pinterest for video.

That’s a simple, reductive analogy, but it’s a useful one. It clears up any confusion about whether or not Waywire is a news site first or a producer of content. While you can find some exclusive content on Waywire and it has production partnerships, that is not the main point. The main point is that it is a platform that provides a place and a system for people to curate and organize videos according to subjects. For instance, I could establish myself as an expert on cat videos and create a hashtag called #cat. You’d then know to check in on my #cat feed whenever you feel the need to get a dose of felines. I can easily add videos to my feeds by using Waywire’s bookmarklet, which pipes in video from across the Web and works in the same ways as Pinterest’s “pin it” bookmarklet.

Waywire is thus about context and social discovery as much as it is about gathering videos in one place. That’s where its founders, Nathan Richardson and Sarah Ross, believe that it has an opportunity to do what YouTube can’t. While YouTube users can set up playlists and channels, they are restricted to working only within the one platform and can’t take advantage of other video content from across the Web, such as Vimeo or Hulu, or build an interest graph based on people’s authenticated identities. YouTube also relies mainly on algorithms for organizing its content, which is why some people complain about the difficulty of finding good stuff to watch when they’re just in the mood for browsing. Waywire, on the other hand, puts people and their choices first, just as does Pinterest does with its boards, Reddit does with subreddits, and Pandora does with channels.

“It’s the future of how video content will be consumed via contextual sources that you trust and friends that you trust,” says CEO Richardson, who has deep experience in media tech, having worked as general manager at Yahoo Finance and CEO of ContentNext Media, which owned PaidContent.

That vision of being a “social artery” for video is what has attracted investors, who have now put in more than $1.75 million into the startup. Recently, Waywire added another angel investor, whom it won’t yet identify except to say he’s a partner at a VC firm. And First Round Capital has increased the amount of money it initially committed to the venture. Meanwhile, the site will launch in beta within 30 days and will have a fresh skin that will more prominently display the various “wires” (categories). We got our hands on a screenshot that provides a glimpse of what the re-design will look like.

In alpha, Waywire has been a bit messy, presenting users with a mass of videos presented in a grid format but with no clear organization. While each user has a profile under which is displayed the videos they have been “wiring” or “re-wiring” (basically just sharing and curating), those profiles are hard to find. Users also haven’t yet been given the ability to create their own wires, which means it is essentially only half a product. It’s likely that the redesign will address those issues, making Waywire’s vision much clearer and the product more user-friendly. Still, the startup claims that its early metrics are encouraging. Most prominently, it says the average user watches 13 minutes of video per visit. 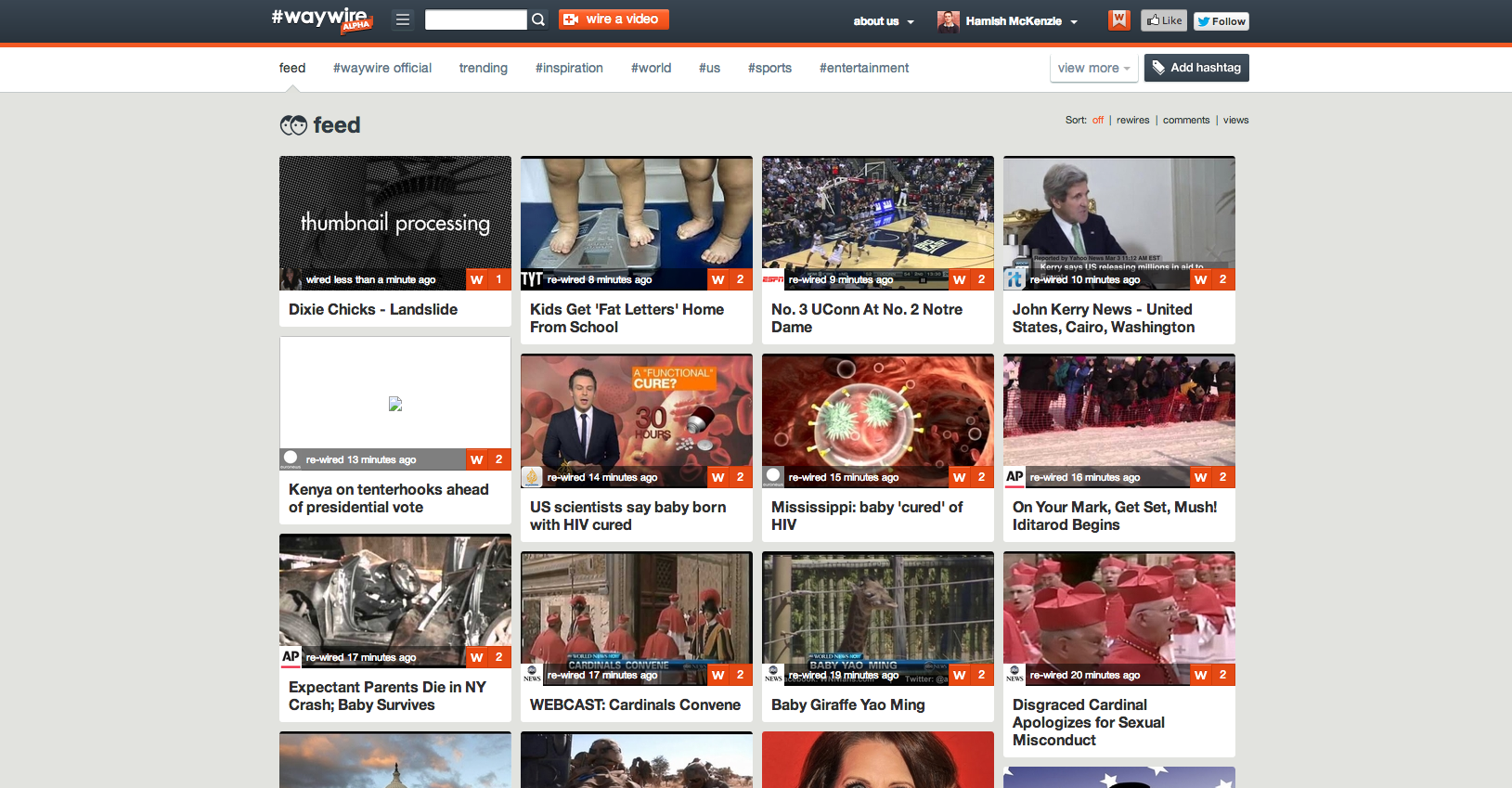 Richardson says monetization plans for Waywire include pre-roll advertising, and sponsored content that will appear within wires. That way, people will be exposed to ads that are relevant to whatever content they’re actively seeking out. “Advertisers are really hungry for anything that has context,” he says.

As large as its vision is, however, Waywire will have to overcome several barriers to become even marginally as successful as YouTube. For a start, it has to be clearer about its goals. Is it a site for social issues or cat videos? Its first promo video shows a series of college-age kids talking about the need for economic equality, universal healthcare, and a better-functioning media, and both Booker and Richardson have stressed that it is a platform to elevate discussion around humanitarian concerns. That’s a laudable goal, but it also runs the risk of marginalizing Waywire as “do-gooder” site in the mold of, say, Good, when its ambitions are quite clearly for something much bigger. Waywire’s homepage today, for instance, places as much emphasis on sports videos, “trending,” and entertainment as it does “inspirational” and “world” videos. For his part, Richardson says that while the platform is agnostic, the founders are not, and he will be doing his best to make sure that social-good communities get special attention and will have actions associated with them. For instance, for a wire on gun control, there might be a call to sign a petition, write to a Congressman, or donate to the cause.

Branding might turn out to be a problem, too. The name itself is not particularly memorable, and it’s difficult to say. Add a hashtag in front of it, and it just becomes annoying, especially when it comes to typing the name. Also, the bookmarklet’s call to “wire it” – meaning, send a video to your stream – is awkward and seems unlikely to catch on. Something that’s more familiar within the existing vernacular of social media – like, “share video on Waywire” – might make more sense while the company is trying to make its name.

The more important issue for Waywire, however, is whether or not there is a strong need for it to exist. People, and especially teens, are already sharing video prolifically, but they do so to Facebook, Tumblr, Pinterest, and Twitter. There remains a big question about whether or not consumers want a dedicated sharing platform just for video. Chill, which has pivoted twice, found that it's certainly not obvious that they do. But then again, there's also Telly, a little-known startup that somehow has 15 million users. More to the point, consumers might find that YouTube already satisfies their needs, especially as the video giant puts more emphasis on curating and suggesting content according to users’ past viewing habits and their Google+ friends.

Still, these are very early days for Waywire, and it will need time to grow and get traction. The founders’ vision of building a more open platform for the sharing of Web video has a lot of merit, at least in theory. It is tapping into a zeitgeist of proven habits around social sharing and content feeds. The beta launch is where things will start to get interesting for Waywire, not least because it represents a chance to make a clearer, more aggressive sales pitch to consumers. At this point, that should be priority number one.