In November, we wrote about how Tictail, one of Stockholm's buzziest startups, embodies Sweden's minimalist design and is using the aesthetic to help people create beautiful online stores. Now, just 10 months since it launched, Tictail has announced that it has surpassed 10,000 stores hosted on the platform and is planning global expansion.

The 10-person startup lets people start online stores for free and then gives them marketing advice to help them promote their products and learn from their analytics. Popular stores include ceramics shop By Mutti, which was started by the CEO's mother, and a store for a Sweden-designed transparent speaker. Tictail, which has $1.5 million in backing from Balderton Capital and German super-angel Klaus Hommels, plans to make money from third-party apps and a premium version of its product that includes custom domains and discount codes.

Tictail co-founder and CEO Carl Waldekranz says the platform's fast growth has been driven by user recommendations. A recent survey of its users found that 81 percent of respondents said they had recommended Tictail to someone else because of its "user-friendly interface" and "pioneering design."

So far, most of Tictail's users come from five countries: Sweden (30 percent), the US (10 percent), Germany, France, and the UK. It is only available in English, but the startup is experimenting with other languages, starting with Swedish and German. It also plans to move more aggressively into new markets this year. 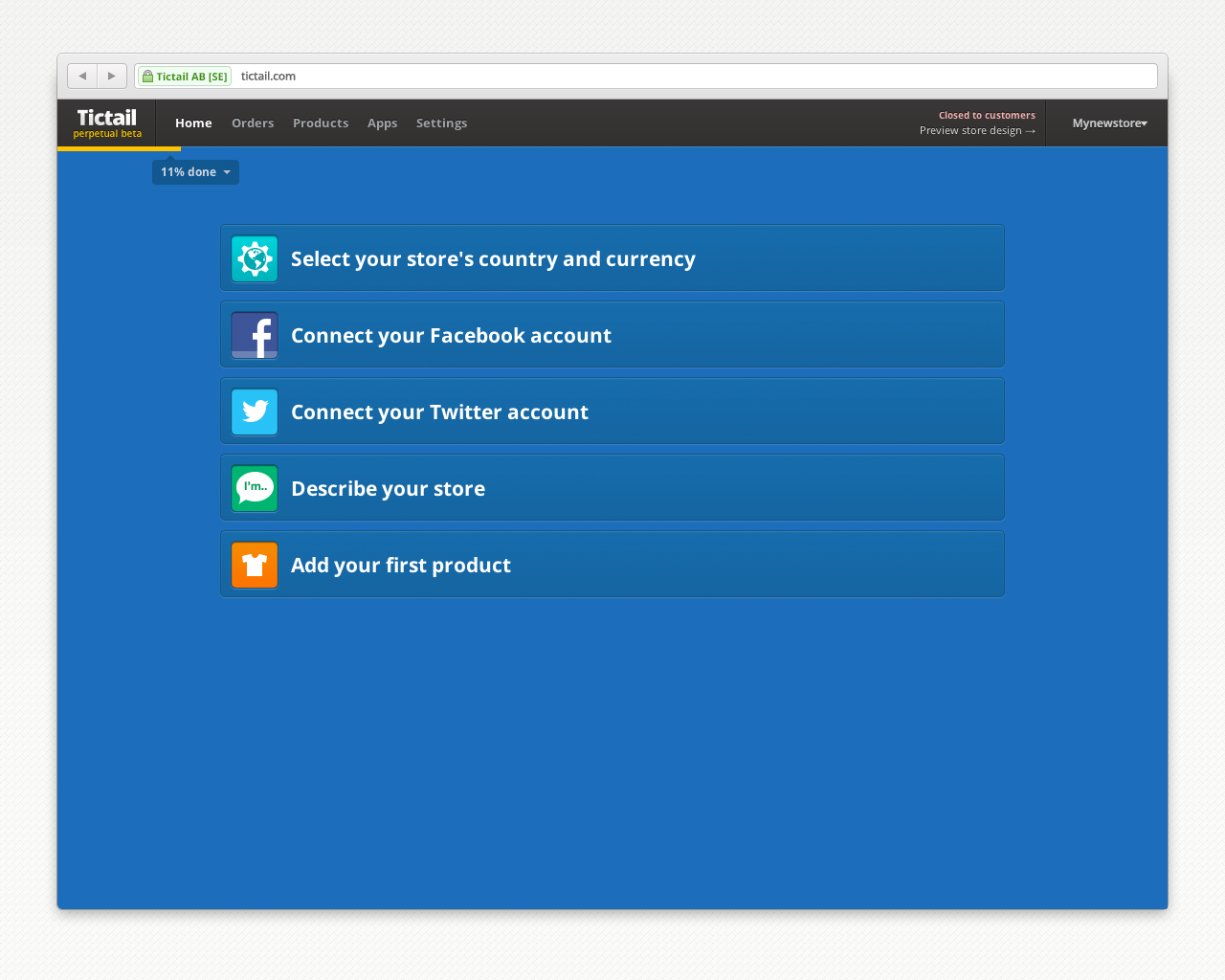 Waldekranz says the goal is for each one of its top markets to be more important than Sweden by the end of 2013. He now spends half his time in London to learn how to accelerate in new countries. As part of the push, the company will spend time with developers and designers in the local communities, taking part in workshops, hackathons, and conferences. The company's first focus will be on expanding in Europe, but the US will become more important in the long term. It also plans to hire more staff, including a "technical evangelist," whose job will be to interact with developers and designers who build apps for the platform.

The apps will be a key part to Tictail's long-term future. It is now working with partners in online advertising, who will build add-ons for the platform that will help stores automate their marketing efforts around Facebook advertising and Google ads. Other early apps will include CRM features, such as live chats. Waldekranz says the startup will launch the apps program in the summer but it will initially be constrained to commercial partnerships. Later on, it will be opened up to independent developers.

Tictail is also concentrating on making its stores more social. At the moment, the first interaction between a Tictail store and a visitor revolves around buying products, which is a high-level barrier to entry, says Waldekranz. Instead, Tictail wants to help stores connect and build longterm relationships with customers and other businesses. Part of that will entail adding a subscriptions feature that lets stores push out updates and offer discounts to their most loyal followers. The social features will also help build a stronger identity within the Tictail community.

“You should come into Tictail and by finding out it’s a tictail store, it will add value," says Waldekranz. He characterizes Shopify stores – Tictail's main competitor – as like "lonely islands on the Internet" that have no relationship to each other. On the other hand, he thinks of Tictail as a "distributed community." While Tictail will never have a physical sales office, Waldekranz says it takes a hands-on approach to its community. "We’re definitely the kind of company that want to be active in the community that we’re building."

When it does eventually push hard into the US, however, Tictail will find a tough fight with Shopify, which has broad brand recognition in North America and its own design-first approach, not to mention $22 million in venture backing and big brand customers, such as Gatorade, Amnesty International, and General Electric. At least initially, it seems like Tictail's approach will be to target indie brands and boutiques. To reach beyond that niche, it will likely need to raise a lot more venture capital.

In the meantime, the startup will be hoping its clean, spare approach to design is enough to lure image-conscious vendors. It also has the advantage of a strong sense of playfulness. To get a sense of that, as well as Tictail's design chops, you can check out its "10,000 stores" announcement at its website.