The dream for "TV Everywhere" launches on Monday. In Sweden

In November, I traveled to Stockholm, Sweden, and met some of the city’s most promising startups. Among the most exciting – and daring – was Magine, a “TV Everywhere” company that raised $8.3 million in seed funding and had spent three years building a cloud-based alternative to cable TV. The founders called it “cable over Internet protocol” – COIP. “This is really what ‘TV Everywhere’ should be," Jason Hirschhorn, former MySpace co-president and founder of Media ReDEFined, said at the time. "Not just certain programs on demand, but the ability to take your package with you and watch live and on-demand anywhere, as long as you are still a customer.”

Magine, which at the time had 2,000 beta users in Sweden, lets people watch cable TV shows on their iPad, iPhone, desktop computers, or on TV through an app. As well as being able to watch live shows, viewers can also skip back in time within shows, and across all channels for as far back as a week. One of the key draws of the service is that subscribers can pay on a month-by-month basis rather than signing up for a year, and it requires no set-top box. TV shows viewed through the app stream flawlessly even on a weak 3G connection.

At the time, I noted that Magine (say it like “imagine” but with the first “i”) is unlikely to come to the US any time soon. With the media consolidation among studios, cable companies, broadcasters, and content owners, it’s almost an impossible market for a startup to disrupt. But in much of Europe, where the separation between cable companies and content owners is more clear cut, it is a different story. Magine plans to launch in Spain before summer, but it will first look at its homeland. On Monday, Magine will come out of beta in Sweden, launching its “First Edition” to the 40,000 people on its waiting list, on top of the 11,000 people already using the service. It is launching with 30 channels.

This is not quite the grand launch that Magine had in mind. The First Edition comes with some restrictions. (Update: The Magine people have been in touch to say that they had always been planning to start with a restricted launch.) For example, Magine is prevented by law from streaming TV shows from public broadcasters that have already aired. In other words, Magine can only stream shows from those 10 broadcasters live, at the same time as they air on terrestrial TV. Magine’s CEO Erik Wikström concedes that the founders didn’t realize such a law existed when they set out to build their company. However, he says there is likely to be a law change when the issue comes before Parliament in May, and that by summer “95 percent” of the channels on Magine will have full interactivity – that is, the ability to watch them live and to watch shows that were aired up to a week in the past.

Wikström says the restriction has affected how Magine packages the product. For instance, the company has decided to offer more channels as part of its free version for the first six months. Magine has a freemium model in which subscribers can get a certain number of channels for free but are asked to pay a monthly subscription to upgrade to the full version.

The company says it is launching with the TV industry’s blessing in Sweden. It sees itself as a partner to broadcasters, rather than a disrupter. In effect, Magine is just an aggregator of broadcaster content and TV channels, making their shows portable and cross-device, potentially expanding their audiences. The startup doesn’t include any ads of its own and it provides real-time data to broadcasters.

On Monday, Magine is launching an updated version of its app, with a cleaner design, new views for video search and discovery, and more metadata than what you see in the video above. It is also launching an app that is built into Samsung TVs. Those TV sets are available with a customized remote control that allows viewers to control Magine from the same remote as they would use for ordinary TV. Magine expects to add apps for LG, Panasonic, and Sony in the coming months.

If that all sounds like expensive stuff, you're right. That giant seed round has likely all but evaporated. Magine plans to close another funding round within a matter of weeks. 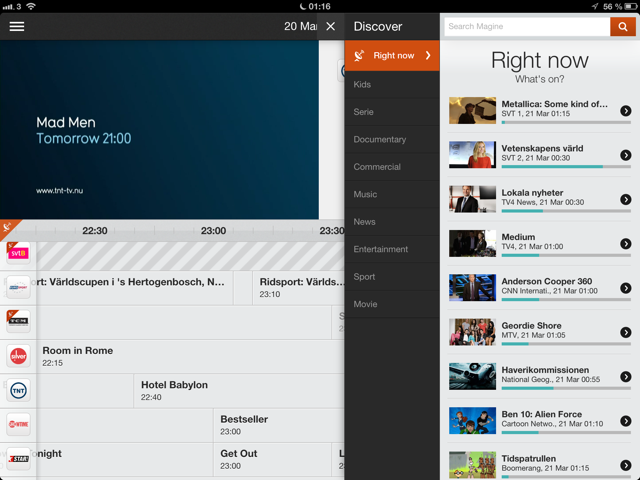 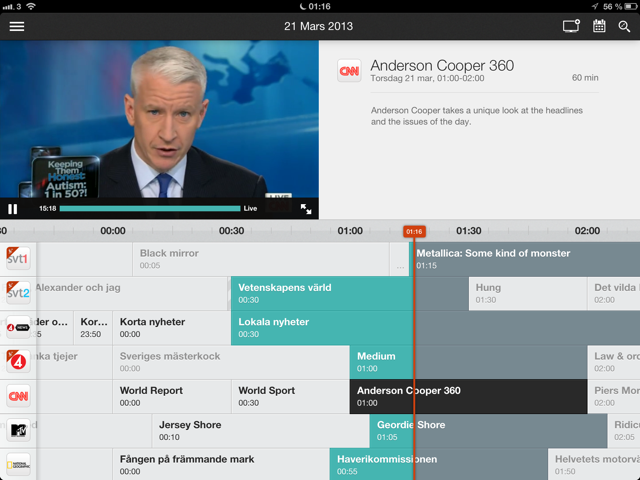 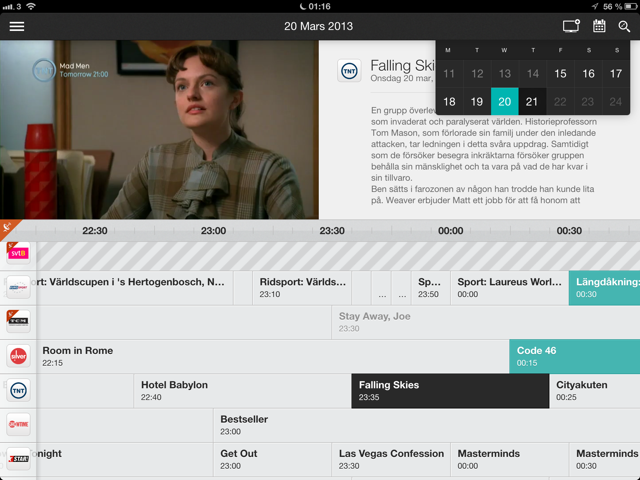