Amazon's confused foray into fashion tries to please too many women. Will it please any?

I am as bullish as you can get on Amazon.

For years, I have argued that Jeff Bezos is the closest thing the Internet age has to a Steve Jobs-level visionary. I've applauded him as one of the only CEOs unwilling to cave to Wall Street pressure -- indeed he's willing to laugh in honking tones obnoxiously in the face of it.

He is borderline crazy and totally unpredictable. Even the journalists and analysts who follow him the closest are continually stymied by his moves.

He is fighting a multi-front war that would make Hitler blush. He is simultaneously finishing off book stores -- you thought the Nook would keep you alive? Silly Barnes & Noble! HONK HONK HONK -- BestBuy, and publishing, while he works at dismantling strong-holds of Netflix and Apple in the process. Meanwhile, Amazon Web Services has forever changed how Web companies are created -- sending ripple effects and shock waves through the startup ecosystem at the same time.

No margins? No problem! He's raised billions in debt to keep fueling it.

And I usually cheer him on along the way. Bezos has something that few public company heads he goes up against have: Resources, a screw-the-establishment attitude, an almost reckless fearlessness, and mad synergies between all these business lines. That makes Amazon fun to watch and a rare public company that can actually plan and execute for the long term. Like Jobs, he's an entrepreneurs' entrepreneur.

Amazon Prime has been the not-so-secret weapon fueling a lot of this. Signing up for Prime is like hooking into The Borg. It gives you free shipping and one-click-purchases ensuring you order more and more from Amazon. In my house the phrase, "I'm getting some stuff from Amazon, need anything?" is said more than "I'm running to the corner store, can I grab you anything?" This is the only reason we watch movies on Amazon versus Netflix is Prime, as well. It's all bundled in. Why not? It's so devastating that eBay-backed ShopRunner has built a Prime-like coalition among non-Amazon sites to compete.

So doubting one of Amazon's new initiatives is an uncommon position for me. But when I started to see its commercials for its new fashion vertical last week, I grimaced. For starters look at that still from the commercial above. There's simply nothing cool about it. Not that horrible yellow floral dress and not the odd 1960s dance moves.

Amazon has never exactly been all-in with fashion. It's made some niggling acquisitions in Shopbop and Gilt competitor MyHabit. It had a site called Endless.com that it closed last fall. And some would call its $1 billion acquisition of Zappos as a move into "fashion" -- but Zappos really excelled at convenience and service. There was nothing curatorial about Zappos -- that was its precise edge. You could find anything. In fact, we've defined the fashion/brand/content wave as the dividing line between Zappos and Gilt. It's what came after Zappos.

Bezos first telegraphed last year that the company was finally making a significant, permenant and expensive move into fashion setting up shop in a 40,000 square foot Brooklyn headquarters. This isn't a trial balloon. The New York Times characterized it as, "Go big and spare no expense."

Fashion is not coincidentally the vertical where most of the up and coming ecommerce companies are squarely focused, including Gilt, Asos, NetaPorter, NastyGal, Bonobos, Zulily, Rent the Runway, ShoeDazzle, and in its own way Warby Parker and Fab -- and New York is not coincidentally where many of them are based. What these 10 companies and so many others like them have in common is a reliance on things like brand, curation, content, and experience.

Brand is a slippery word. By "brand" these guys mean trust that users will come to them, and they will give them something wonderful. Amazon's "brand," on the other hand, is about low-price, convenience, and mind bogglingly comprehensive inventory. Those two are fundamentally at odds.

Each of these newer companies talk about their customer, their "girl," their "guy" -- their strength is innately knowing this individual and leading that market. Amazon, on the other hand, has excelled at doing the precise opposite. Having something for everyone. After all, it's the very company that inspired the phrase "the long tail." Fashion only cares about the head.

Indeed, these younger companies are almost all purposeful reactions against Amazon. They know they can't compete in Amazon's game, so they are trying to do the precise opposite.

At the end of the day it boils down to what Amazon means by "fashion." When I was debating the strategy with Adam Penenberg and Kevin Kelleher last week they kept suggesting it would work because Prime customers would come to get a better deal on the dress they wanted. That's not fashion, that's fulfillment. And that's what Amazon -- and Zappos -- have always been great at. That's how women bargain-hunt, but that's not how women shop.

I'd agree that's a game Amazon can win with one hand tied behind its back. But Bezos is clearly trying to do something more that this.  In an interview with the New York Times about the move last year, he said he would have price points that designers could live with. In other words: No discounts. Indeed, most of the dresses range in price between $100-$500. That's wildly higher priced than more fashion-forward chains like H&M, Zara, and TopShop, and the price points aren't even in keeping with a chic, discount Target or TJ Maxx approach either. But nor is it high enough to include the best labels. It's not "luxe" as the New York Times profile suggests. It's solidly and boringly mid-market. Not a bargain, not inspiring and not particularly remarkable.

And just like Amazon's approach with publishing, it's doing one-off deals with designers, recently announcing a deal with Derek Lam. These are aimed to up the fashion cred and grab attention. And yet, in Elle's write up on the deal, the author lumps the move in with Lam's recent decision to design a mass market line designed for Kohl's. Ouch. Not exactly exclusive.

The whole apparel market seems confused by what Amazon is trying to do here. It may be yet another example of Bezos being out of sync with everyone in the market. Perhaps we just can't see the hidden genius in it yet. Perhaps.

But the details coming out show that Amazon Fashion doesn't betray the all-in ballsiness we've come to expect from the brand. It just doesn't quite go far enough in either direction with fashion. It doesn't stick to its strengths -- scorched earth discounting or outbidding wounded old world rivals -- and yet at the same time it's too rooted in the Amazon way of trying to have something for every woman that it doesn't really embrace curation or style either.

There are bright spots. This is, after all, the best etailer on the planet. Product-wise Amazon has made a valiant effort here when it comes to trying to convey a sense of curation, content, and experience. It looks different and more modern than other Amazon verticals. Browsing is far less painful that it always was at Zappos.

There's categorization along brands, types of apparel, and by "look books" and trends. I decided to check out a trend on shift dresses and modern clear shoes enticed by the magazine-like art, and clicked on a BCBG dress. The product page had a video model instead of a static photo twirling and smiling and showing off the dress, like a non-pixelated tiny Princess Lea telling me this dress might by my only hope. It sort of made me jump. This -- plus the ad campaign -- are the spare-no-expense part of the gambit at work, and it's effective from a product point of view.

But the merchandizing falls short. There are a lot of women to please in Amazon's mass audience, and while the UI feels very sophisticated, a lot of the clothes stretch the definition of fashion. There were some God-awful pieces in there, and there wasn't a strong curatorial point of view. If you buy that the key to doing real fashion online is more merchandizing savvy than algorithms, Amazon hasn't nailed this.

It's trying in publishing, where it has to pick and choose titles and invest heavily in them. But even there, it's (wisely) going with mass-market pleasers where it can outbid traditional publishers, wounding them further. And Amazon has formidable advantages in publishing that it doesn't have in fashion. Perhaps Amazon is playing too nice here and that's what has it off-kilter?

Below is a still of "five trends to wear now." Those words are right for a site trying to embrace content and curation, but none of the five seem particularly fashion-forward, two are okay, and three of the five are God-awful. Another woman may disagree, but I doubt there's a woman who finds all five fashionable. These are not tailored at the same woman and certainly wouldn't all show up on the pages of a current fashion magazine.

Additionally these descriptions aren't particularly of the moment in fashion. Shift dresses, prints, and shirt dresses are staples of many wardrobes season to season. Fit & Flare and Floral both sort of make me want to gag. I may wince at a lot of things I see in fashion magazines, but they are typically provocative and display a point of view. These dresses don't. 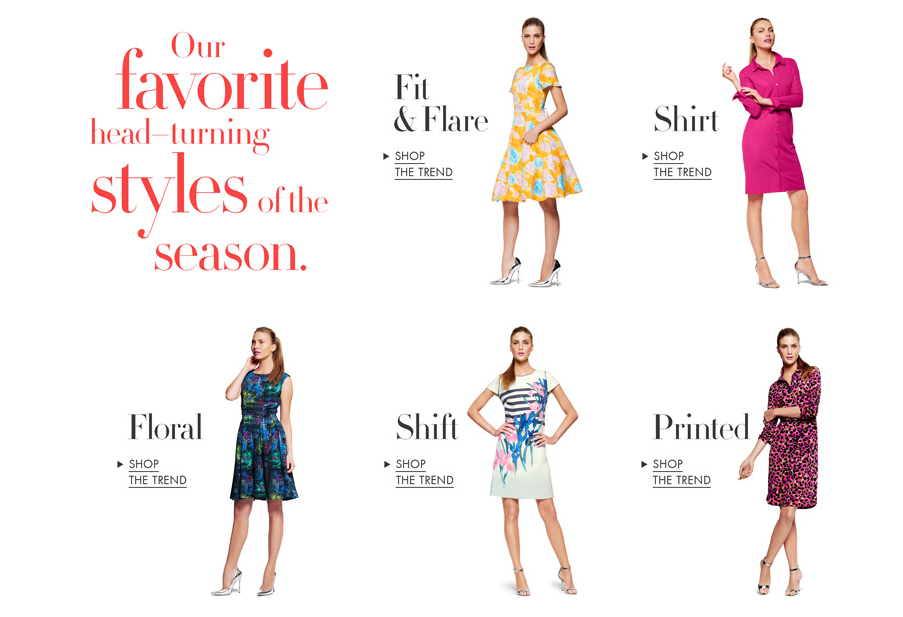 Amazon could well dominate in underserved niches on this site.

A big bright spot was a massive, 21-page maternity section. Curated it is not, but no one has a big maternity section online. Now, that's an area where Amazon could dominate by its sheer volume of audience, benefits of Prime and willingness to do something no one else wants to take on. And as someone who has been pregnant 18 months of the last three years, I can tell you it's a good maternity section -- with every top yet affordable brand I hunt down in boutique after boutique. If I weren't having a baby any minute, I'd be all over this. The long tail at work.

In order to convey what it's doing in this confused debut, Amazon needs to answer whether shoppers are coming for demand generation or demand fulfillment. That's the dividing line between Zappos and Gilt. The latter will depend on mass volume and carrying as many designers and lines as possible, a la Zappos. Amazon can win at that all day long. But if it's going to do the former, it'll need an editorial, curatorial stance. Or it should simply shell out cash to buy one of the upstarts who has this in its DNA.

Fashion -- with a capital F -- is inherently exclusive. You can't be everything to everyone. It's as much about what you cut out as what you include.