Life after Google Reader: Skimr offers a minimalist way to read the Web

Now that Google Reader has been put on Death Row, media and Internet geeks get to play the “What should the next RSS reader look like?” game. (Warning: Only bad-asses allowed.) Digg, which is working on its own reader, is out in front in this game, even while Feedly and Bloglovin might argue that they’ve already answered the question. Well, here’s another one to add to the list, and it comes from the Czech Republic: Skimr.

While Digg appears to be contemplating a feature-rich reader, and Bloglovin is intent on bringing a social layer back into the RSS experience, Skimr is going in the opposite direction. It presents a minimalist reading environment predicated on the notion that users want to skim-read headlines and excerpts before deciding whether or not to read the whole article. So, that’s all it shows.

On the Skimr homepage, you’re presented with a list of the websites you like to keep track of and (so far) nothing more. (Folders are coming soon.) Then, for each feed, all you see is a continuous feed showing you headlines and first sentences of the most recently published stories. Once clicked on, the links direct you to the original websites that published the articles.

Skimr is a consciously stripped-back, minimalist experience. It’s a Zen way to stay on top of the torrent of content published to your favorite sites. Petr Kral, who heads up the project, says he wants the RSS reader to be super easy. “I think of Skimr as a Twitter for websites,” he says. 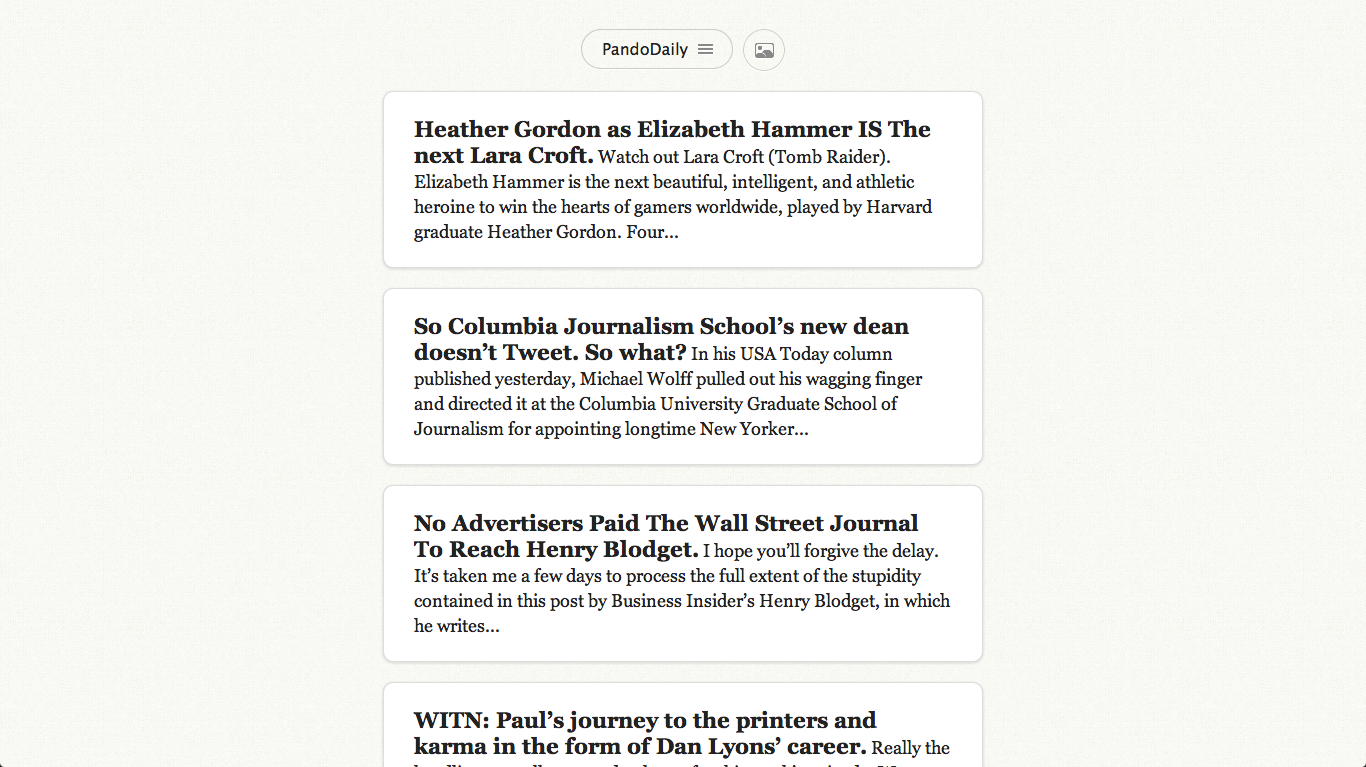 Because he is taking the Twitter approach, Kral says there is no need for “delete” or “mark as read” buttons in Skimr. He wants people to transport their social media reading habits into the RSS environment. You just let your eye scan down the page, and when you’ve had your full, you move on. If you hit something you’ve read before, you’ll know that it’s time to switch to a different feed.

Prague-based Kral is working with a small team on Skimr as a side project. His day job is as a product advisor to the owner of one of the Czech Republic’s largest Internet companies, Seznam.cz, a media and search portal that is the country’s answer to Yahoo and Google. Until a couple of years ago, the Czech Republic was one of the few countries in the world where Google wasn’t the number one search website, and that was partly because Seznam.cz was so dominant. Seznam.cz lets its employees embark on side projects like Skimr, which Kral says is a similar in concept to one of the company’s celebrity-focused properties, Super.cz.

In a case of good timing, Kral actually first built Skimr a few weeks ago, before Google announced that it would be shutting down Reader. While he won’t divulge user numbers, he said that the number of feeds being added to Skimr shot up from a couple per hour to 100 per minute, largely thanks to being featured in blog posts about Google Reader alternatives. Realizing the demand and the opportunity, Kral is now re-building the product’s backend so that it can handle heavy traffic. He and his team are also working on mobile app versions of the reader, for both iOS and Android.

For now, Skimr is not a money-maker, but Kral envisages charging websites for a featured spot on the homepage, and perhaps experimenting with in-app advertising for the mobile versions. Its other challenges will be the same as Google Reader’s, Feedly’s, and Bloglovin’s, and especially the question of whether or not people still want RSS readers in an age of personalized news reading apps and social media. Just yesterday, for instance, we saw Yahoo acquire a would-be Reader competitor called Summly, which summarizes news stories and displays them in a mobile app while delivering a personalized reading experience that adapts to the user’s interests.

For mainstream news consumers, the Summlys and Flipboards of the world will likely be enough, but for nerds and completists who want to keep track of every single item published to their favorite websites, RSS readers will still be important. And in that case, Skimr deserves to be considered among the rest of the new hopefuls – especially if you just can’t stand clutter.