Russian mega-investor Yuri Milner has made his first significant investment in a startup from his homeland in more than three years. Milner joins a host of other big names in backing hotels booking service Ostrovok for a $25 million Series B round.

Moscow-based Ostrovok was founded in 2010 by former Google and Slide employees Serge Faguet and Kirill Makharinsky. Now the company is trying to become the leading online travel brand for Russian speakers – a market that encompasses about 300 million people. The Expedia-like site has a strong roster of believers behind it for its Series B, including lead investor General Catalyst Partners – which has also backed travel giants Kayak and ITA Software – Frontier Ventures, Accel Partners, and Eric Blachfor, the former CEO of Expedia, among others. The founders even chucked in $2 million of their own money. Founders Found and Atomico took part in Ostrovok’s $13.6 million Series A round two years ago.

Russia is similar to China when it comes to the development of online infrastructure – or relative lack thereof – and therefore similarly represents a growing opportunity for ecommerce. As the Financial Times notes, while online shoppers account for only about 2 percent of total retail sales in the country, online sales are expected to hit $25 billion by 2014, up from 13 billion in 2011, according to McKinsey. In fact, when it comes to ecommerce, Russia even lags behind China, where online shopping accounts for 6 percent of total retail sales.

China’s experience might be instructive in this case, because travel sites are among the most successful ecommerce sites in China, outside of the giant marketplaces such as Alibaba and 360buy, and aside from gaming-driven companies such as Tencent and Shanda.

For instance, travel portal Qunar, which is China’s equivalent of Kayak, sold a majority stake to search giant Baidu in 2011 for $306 million, valuing the company at $500 million, while Tencent invested $84.4 million in competitor eLong for a 16 percent stake. While Qunar started off focusing on flight bookings, it has recently found a lot of success in hotel bookings too, as Chinese are becoming more frequent and sophisticated travelers. That bodes well for Ostrovok and could explain why for now the company is focused only on hotels. 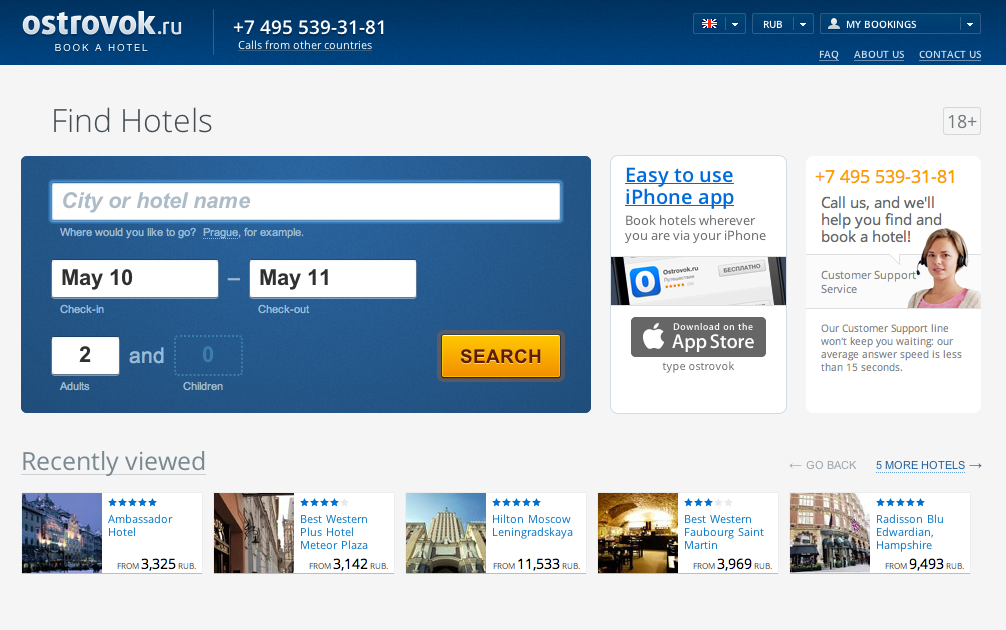 It’s likely, then, that Ostrovok’s investors spy similar opportunities in Russia, which with 60 million Internet users is now Europe’s largest Internet market. The early signs for the company have been positive. The website is already registering 1 million unique visitors a month, and the company has grown to 200 employees in short order. Ostrovok also has API partnerships with Russian search giant Yandex, Google, Megafon, and Moscow’s Sheremetyevo airport, which all tap into the company’s hotels database.

Ostrovok plans to use the new funding to further develop its products, add more than 25,000 hotels from around the region to its database, and to deepen its relationships with existing partners.