If you squint hard at the data, US broadband doesn't suck so hard after all (insists cable lobby group)

In Chattanooga, the broadband is so fast you can see it with your bare eyes

When it comes to broadband speeds, the US is an embarrassment. We all know that, right? The broadband titans of the world are Hong Kong, South Korea, and Japan, with Latvia and Romania rounding out the top five. The US doesn't even make the top ten, clocking in only at number 14.

Looking at the data, however, it becomes clear that the top countries for broadband as measured by average peak connection speeds are small and densely populated, so big old USA hardly stands a chance. No, I wasn't clever enough to figure that out for myself. That's a contention put forward by a new online magazine called The Connectivist, created by the National Cable & Telecommunications Association ostensibly to cover technology, Web culture, and TV.

The Connectivist has shown that when US states are considered separately and compared alongside other countries, then the US doesn't do so badly after all. Of course, keep in mind this is pretty basic propaganda: the National Cable & Telecommunications Association – whose members include Time Warner and Comcast – have a vested interest in convincing Americans that they don't need faster Internet. In fact, just the other day, Time Warner's CFO recently made the ridiculous claim that there's no consumer demand for gigabit Internet.

So which states, according to The Connectivist's infographic and data from Akamai, compare best against the rest of the world? Well, if they were treated as countries, the District of Columbia would come in third, behind Hong Kong and South Korea, Delaware and Vermont would be five and six, and New Hampshire, Massachusetts, Virginia, Connecticut, Rhode Island, New York, and Utah would fill spots nine through 12.

I think you can all join me in chanting, "USA! USA!"

Except there are a few glaring exceptions in this view of the world's broadband speeds – most notably, the 40 other states in the US, which drag down the national average significantly. Also, California, home to Silicon Valley and hub of innovation, is nowhere to be seen on this list. And the good people at the NCTA make no mention of Kansas City, KS, Chattanooga, TN, or Lafayette, LA, all of which are gigabit cities hooked up to Internet connections that are about 100 times as fast as any offered by Time Warner or Comcast.

So don't let this pretty chart below go to your head, America.

Unless you're living in Delaware – in which case, go wild. 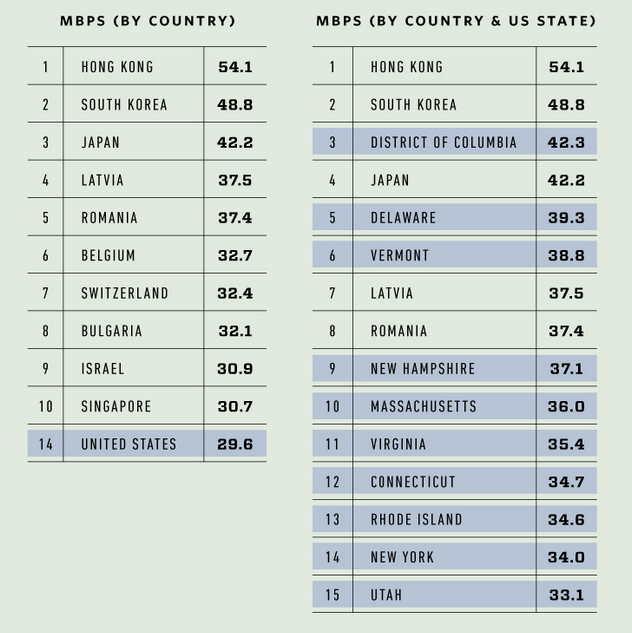