"A Zuckerberg always pays his debts." Your Game of Thrones guide to tech companies

Tomorrow night, HBO's "Game of Thrones" returns for a third season of epic battles, exhilarating wordplay, and surprisingly well-groomed stars. But beyond the show's unmatched ability to balance high- and low-brow entertainment, what makes "Game of Thrones" and its source material "A Song of Ice and Fire," so great is how accurately it reflects our own world (minus all the dragons). The NBA? Nothing more than a clever allegory for George R.R. Martin's bloody novels, according to Grantland. Same goes for the MLB, says Sports Illustrated. And of course Mother Jones is quick to note that the treachery at work in the land of Westeros is no more or less unseemly than what goes on in our own political system.

So what about the tech world? The Economist picked up on similarities between the warring houses of Martin's universe and the big four tech companies in a December 2012 feature story. But for their purposes, the conceit was little more than a hook for a fairly straightforward (yet smart and wonderfully written) piece of analysis.

[Note: This contains spoilers from the first two books/seasons] 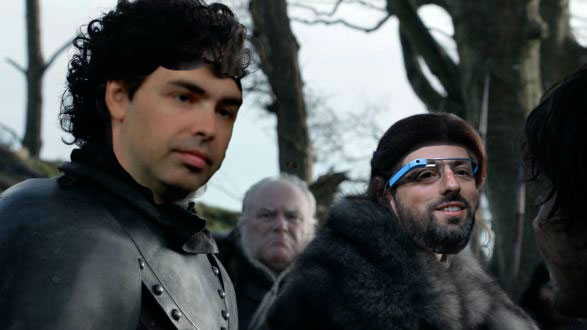 Google's motto is "Don't be evil," and if there's one family that at least claims to operate under non-evil principles, it's House Stark.

But in Westeros as in Mountain View, reality doesn't always match perception. And after the Lannister-led execution of the family's patriarch Ned (a direct result of his unwavering sense of duty no less), his son Robb falls just short of the family ethos, breaking an oath to a crucial ally.

Meanwhile, the last year hasn't exactly been evil-free for Google. A couple weeks ago, the company admitted its Street View project had violated unsuspecting users' privacy by gathering passwords and email addresses.

In the coming months, both Robb and Google may be forced to deal with the consequences of their betrayal. But in the meantime, both families continue to make strides in key battlegrounds, as Robb keeps up his winning record on literal battlefields, and Google's Android OS takes chunks out of Apple's mobile market share (more on that later).

But just as the rulers in King's Landing still pose an existential threat to the Starks, there's one area where Google has failed to contend: Social. That crown still belongs to... 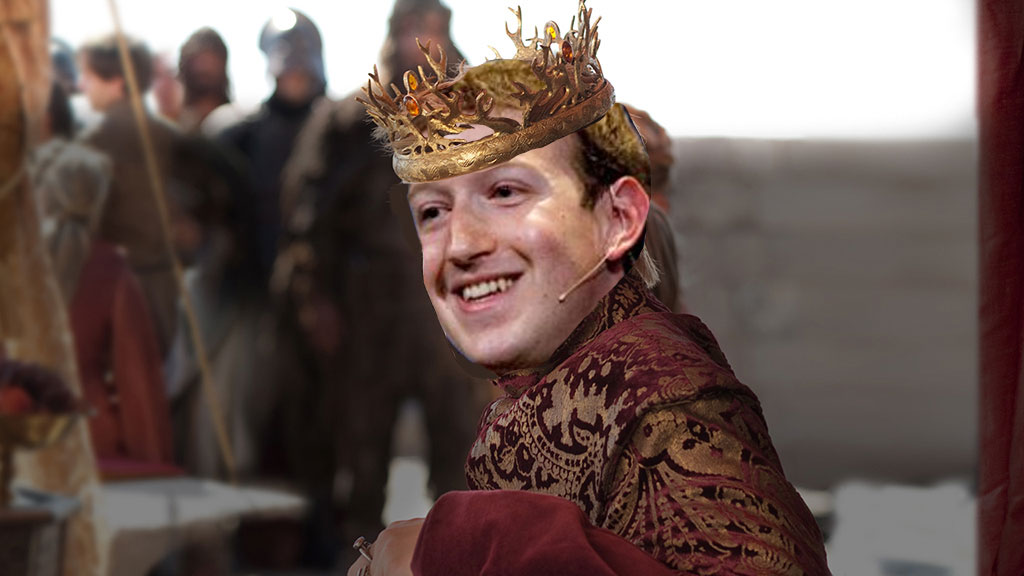 Both Facebook and House Lannister are led by boy kings who are feared and mocked in equal measure. Both have a ton of cash, but also a ton of expenses (war isn't cheap whether it's fought with wildfire or lines of code). And while both ruling houses have a huge number of subjects, those subjects don't always have a whole lot of trust in their overlords.

Like the Lannisters, Facebook is arguably better at conquering than at ruling. It's got all those users, sure, but Facebook needs to make sure its product is compelling enough that people keep coming back for more (not a simple proposition). "Power resides where men believe it resides," says the eunuch Varys in the show's second season. And if Facebook can't make its billion users into true believers again, that 10-digit figure will be nothing more than a number. 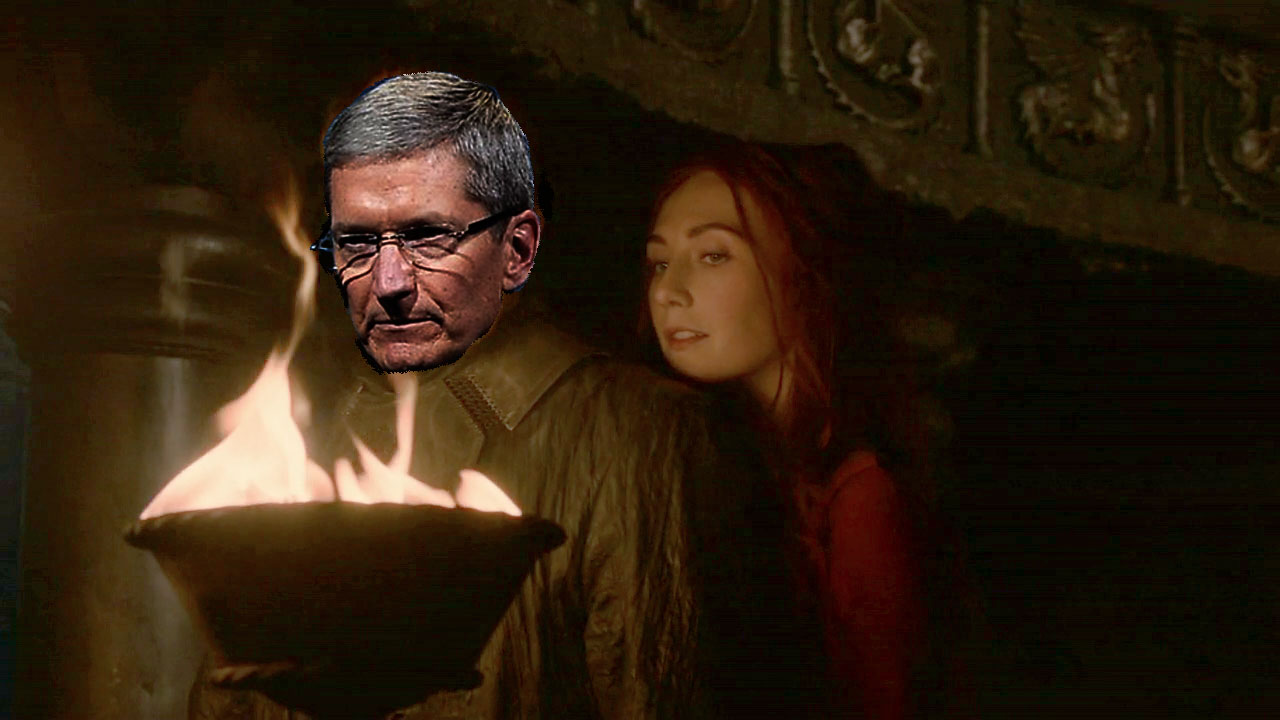 When Tim Cook, successor to the throne of Steve Jobs, gave his first TV interview as Apple CEO in Grand Central Station, hardly anyone noticed him. Obviously, a recognizable face and a dose of charisma is hardly a prerequisite for being a good CEO. But the iconography of Steve Jobs was so tied to Apple's identity, many felt that when Jobs died, a little piece of Apple died with him.

This no-win situation for Cook is echoed perfectly in "Thrones." After the death of the popular, charismatic Robert Baratheon, nobody could muster much excitement for his brother Stannis, nevermind that he was the rightful heir to his throne. Icons simply aren't replaceable. So as Stannis suffered repeated indignities from those who would deny him the throne, Cook faced his own revolt from lordlings (read: shareholders). Then there was Apple's disastrous Maps launch (the tech industry's equivalent to Stannis' epic military failure at the Battle of Blackwater Bay), and the company's plummeting share price.

But don't count either of them out yet. As Adam Penenberg writes, 2013 could be a lot like 2008 for Apple, a mere "precursor to torrential revenue growth." And just as Apple still has the best-selling smartphone in the world, Stannis still has that crazy witch lady who makes shadow monsters come out of her uterus. Take that, Android! 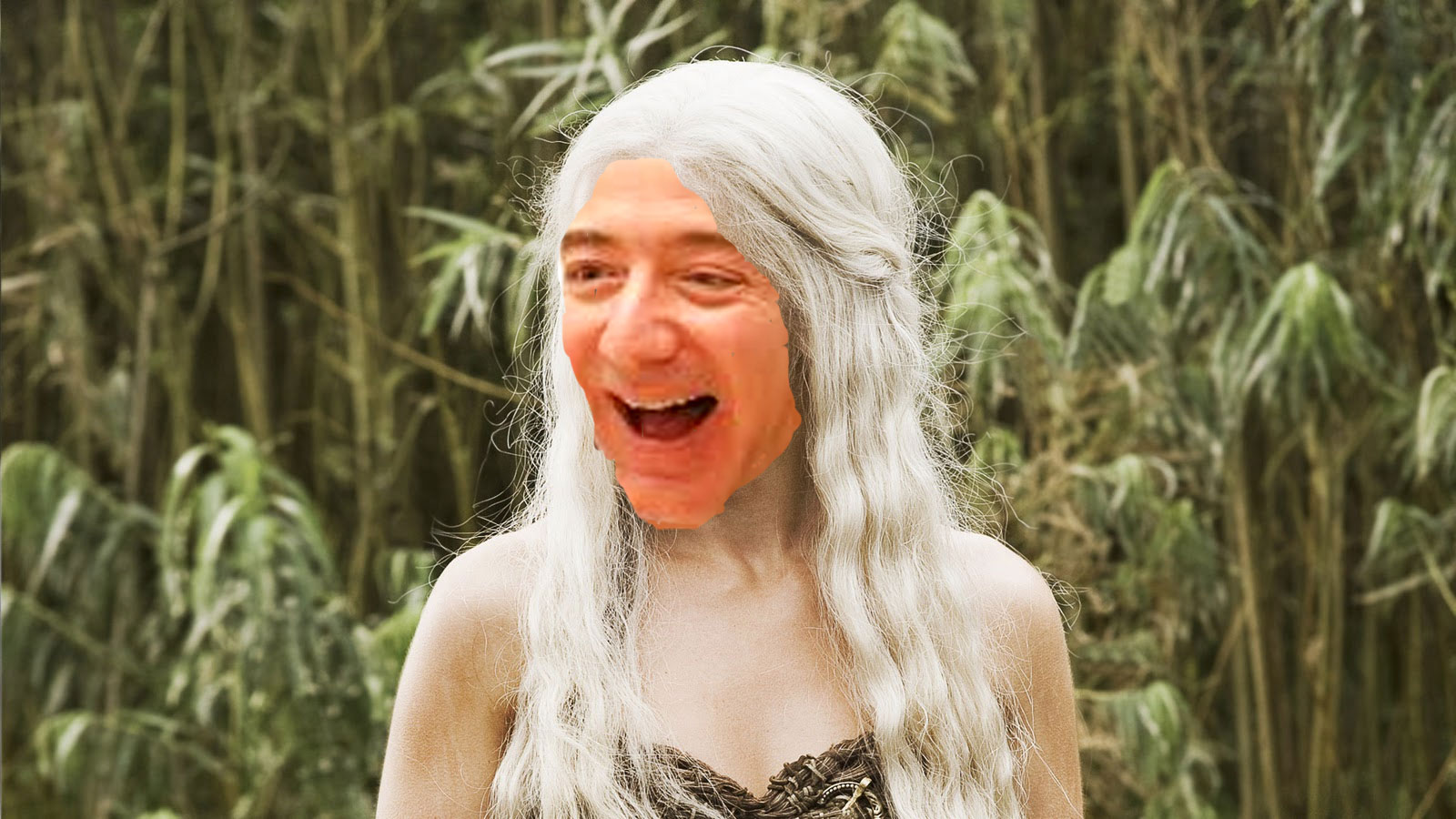 On first glance you may not see much in common between Jeff Bezos and Daenerys Targaryen, the show's white-haired, clothes-optional dragon mother. But take a closer look, and you'll see that both belong to clans that have been around forever. Both are continually written off and yet keep finding unlikely ways to stay relevant. And they both use the same approach when dealing with rival merchants, which comes down to, "Join us, or I'll vanquish you and your undying souls with dragonfire." (Or in Amazon's case, "Join us or you can't use our API anymore.")

As Daenerys roams the desert, picking up followers and laying waste to her foes, Amazon continues to buy up companies like Goodreads, primarily for their massive swaths of user data. But while users are becoming increasingly wary of handing their lives over to the Facebooks and the Lannisters of the world, Daenerys and Bezos treat their customers right. Just as the dragon mother rewards her subjects for their loyalty, Amazon makes its customers feel loved with streaming movies that rival Netflix, free shipping, and affordable tablets. Sure, it makes for lousy margins compared to its competitors. But when you've got dragons (or a cloud infrastructure so massive even the CIA wants a piece of it) that's real power. 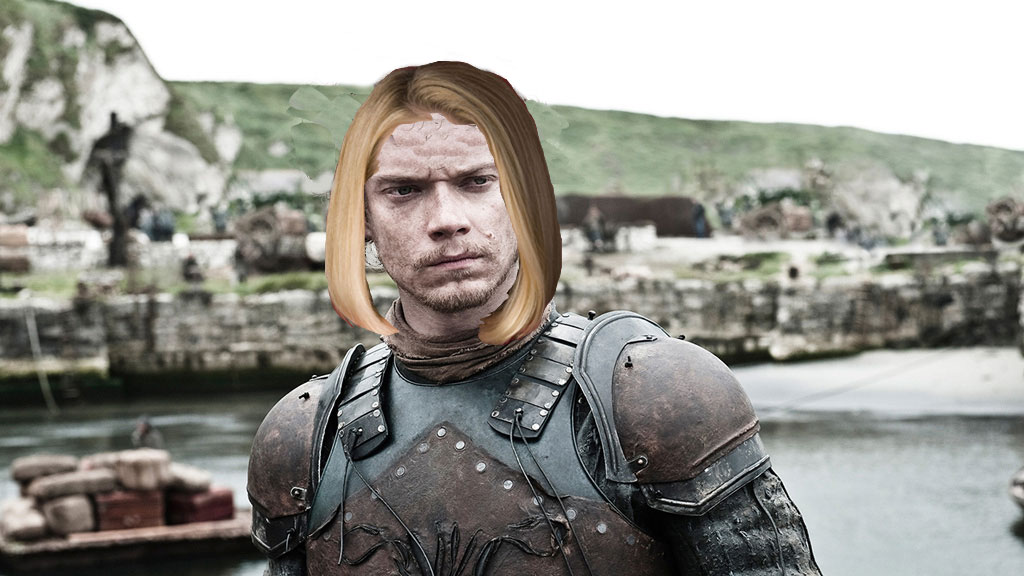 When Marissa Mayer took over as Yahoo's CEO, it left many people scratching their heads. Why would a woman at the height of her career as a Google executive leave for such a maybe-doomed train-wreck?

That's the same way readers of the "Song of Ice and Fire" series felt when Theon Greyjoy, a longtime ward of the strong, mostly-benevolent House Stark, betrayed his adopted clan by joining up with the deluded, backwards-thinking jackasses of the Iron Islands. For Theon, the move ended in ridicule, accidental incest, and betrayal at the hands of his own men. Of course Mayer is much more clever than poor Theon Greyjoy. But if Yahoo's prior history with CEOs is any indication, she could suffer a similar fate (minus the incest). 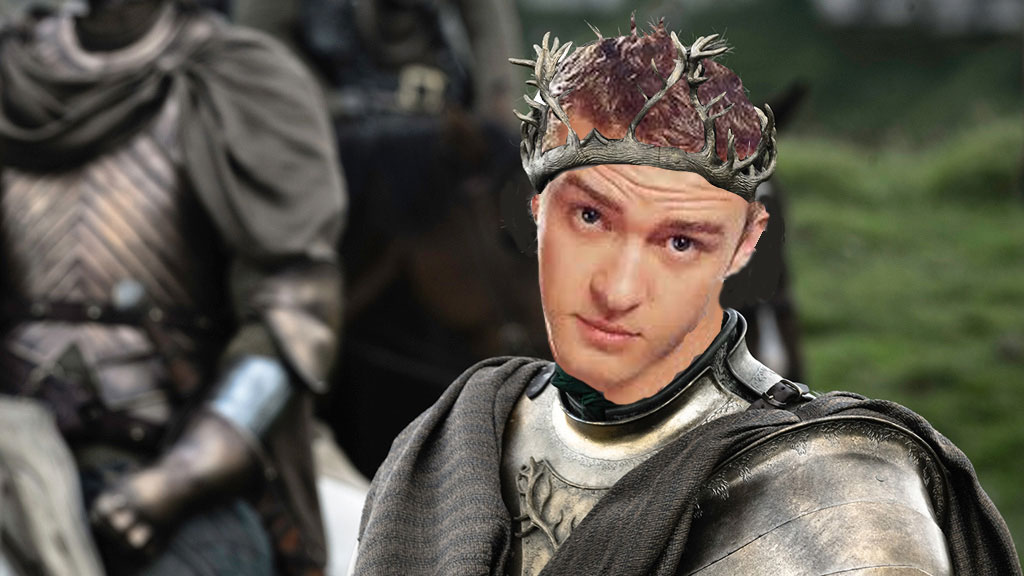 I don't care what people say: I was excited about the Myspace relaunch. Streaming music and social media had come a long way since the days of listening to my friends' demos on the world's ugliest website. Surely Myspace wouldn't put so much time and energy and Justin Timberlake into a launch if it didn't have something good, right?

Unfortunately, new Myspace fizzled out as quickly as Renly Baratheon, who got cleaved in two by the smoke monster from "Lost" while lounging in his tent. His death proved that while Renly (like JT) was great at putting on a show and attracting the love of the masses, he was little more than a pretender to the throne. Oh well, I still like "The 20/20 Experience." 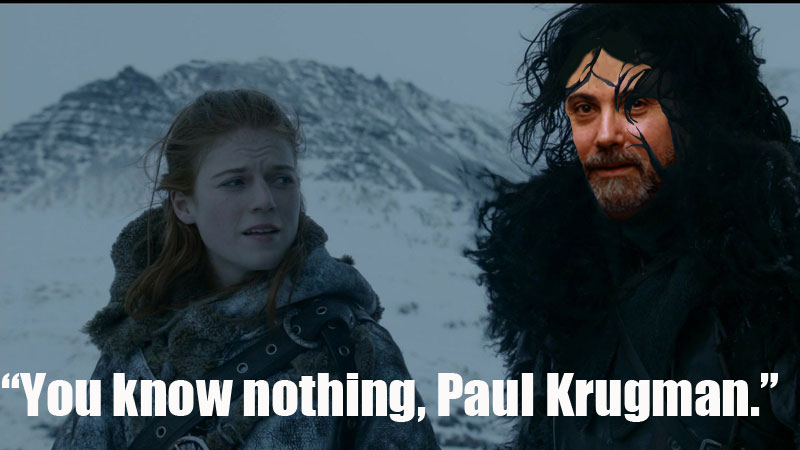 For centuries, both newspapers and the Night's Watch have pledged themselves to ancient codes of honor, fighting the forces of evil and corruption that live beyond the wall of what the public can see. Now, thanks to budget cuts, lack of interest, and more evil and corruption than ever, both the Night's Watch and newspapers have ventured behind the (pay)wall and their numbers are dwindling fast. Of course, "Game of Thrones"'s Jon Snow is no ordinary raider, and the New York Times is no ordinary newspaper. Both have found creative ways to survive the worst of times for their kind. But will it be enough? 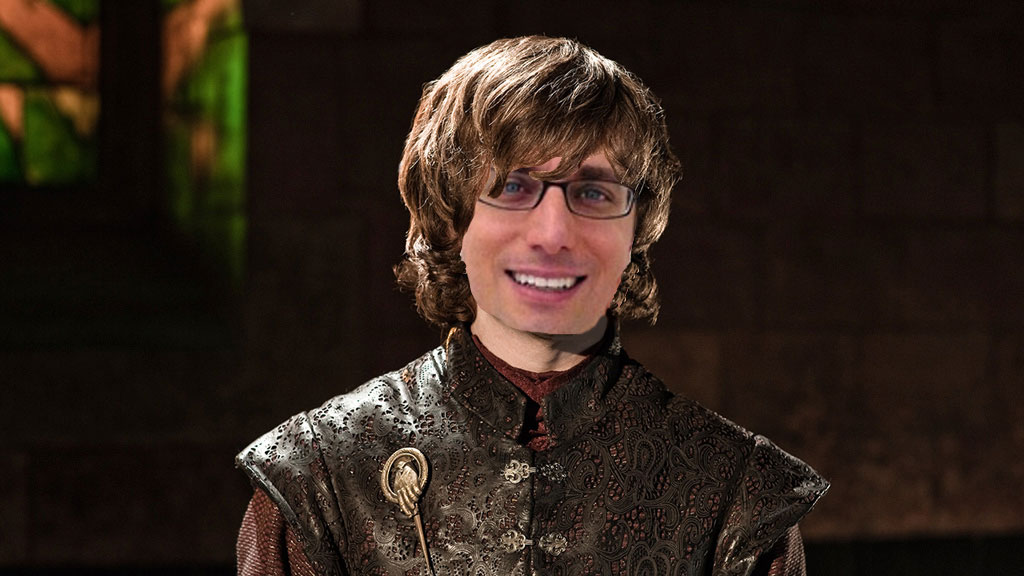 His whole life, people have underestimated him, laughed at him, called him names. And yet the dwarf son of Tywin Lannister has proven himself to be the most cunning (and most entertaining) of all of Westeros' schemers. Meanwhile, Buzzfeed's Jonah Peretti continues to fight conventional wisdom, proving that funny, viral listicles, and investigative journalism can coexist (and rack up millions of pageviews). At a PandoMonthly event last Fall, Peretti told Sarah Lacy, "We just think that humans are complex people that like to laugh sometimes, like to gossip sometimes, and like to know what’s going on in the world.” Sounds a lot like Tyrion. 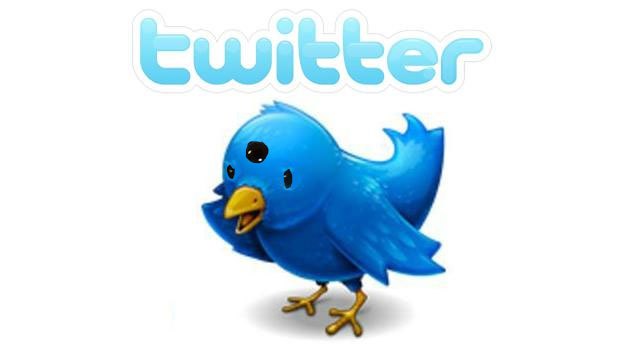 Exhibit A for why Westeros is way cooler than our universe: Here, we send short messages named after the sound birds make. In Westeros, they send actual birds.

The social networking service favored by "Game of Thrones" characters, which involves writing a message on paper and giving it to a raven, may not be very fast or efficient. But it makes up for it in panache and portent.

Oh, and there are also three-eyed crows that can see the future, which is another apt metaphor for Twitter, where the big news stories break before many TV stations and newspapers even wake up in the morning. 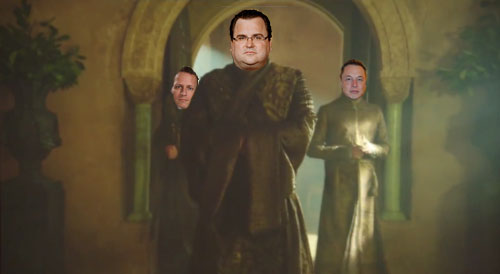 Despite everyone else's fighting and scheming, these are the guys who really run the show.