The promise and the pain of HuffPost Live

One day, founding editor of Huffington Post and now president of HuffPost Live Roy Sekoff, was interviewed by “Entertainment Tonight.” Rather than do a video link, the show’s producers sent a team of 12 people, interviewed him for 20 minutes, and ended up using 90 seconds of the conversation for broadcast. Sekoff thought, “This business can’t last!”

Sekoff is nevertheless in that business – it just so happens he’s trying to reinvent part of it. Along with executive editor Gabriel Lewis, he created HuffPost Live, the Huffington Post’s Internet video network, with the intention of forging a truly social TV experience. “This is not just a video network,” he said at the time of launch. “It’s really a platform for engagement.”

However, that’s only telling part of the story of HuffPost Live, which is now seven months old. Not only is it a community-focused platform in which commenters get as much screen real estate as the video, which they can also audition to be part of, but HuffPost Live also is firmly rooted in the Internet era in terms of infrastructure, benefitting from software solutions over legacy broadcast systems. Contributors beam into the show via Google Hangout. All the video is streamed over the Internet. Hosts respond to questions submitted by viewers, and producers use social media to book guests, a system they manage through a custom-made dashboard that connects the newsroom with the studio and the control room.

Occasionally, Sekoff even sits in his office with an eye on the live feed and sends questions to hosts via Google Chat that he thinks they should ask guests. Even the newsroom, designed by Ace Hotel interior designers Roman and Williams, eschews the sense of traditional. Staff sit at long desks instead of cubicles and move around the open-plan room freely in order to facilitate working with multiple teams. There are blackboards on the pillars, and, in a nod to the past, one long wall is plastered with photos depicting the history of news.

HuffPost Live, in other words, is the antithesis of the time-sapping, resource-heavy approach taken by “Entertainment Tonight,” CNN, or pretty much any other traditional broadcaster that is struggling to transform itself for a time of multiple devices, cross-platform social engagement, and Twitter-ized attention spans.

“We are doing something really different,” says Sekoff, who speaks in excited bursts. “We get people who say to us quite often, ‘After I’ve been watching and engaging with HuffPost Live, I get really frustrated when I watch TV, because I’m like, How come I can’t comment? How come I’m not part of this?’”

Sekoff says that right from the start HuffPost Live has enjoyed the full support of both Huffington Post founder Arianna Huffington and Tim Armstrong, CEO of AOL, which owns Huffington Post. One would hope so. More than just a video-streaming network, HuffPost Live represents an important transition in the Huffington Post’s evolution as a media company. “We’re going from being the online newspaper to being an international, multi-platform, multimedia corporation,” Sekoff say. “This is a big moment for us.”

Half a year in, that big moment seems to be tracking pretty well – at least, as far as numbers are concerned. While the network has abandoned the launch promise of expanding to 16 hours of daily programming by 2013, it does broadcast 12 hours of live television every day, from 10am EST to 10pm EST, and repeats that block of content every 24-hour cycle. That means the operation is streaming video 24 hours a day, seven days a week. For a TV startup (albeit one within a large media company), that is a noteworthy achievement.

Over the early months, it has also seen its viewership steadily rise. In November, the month of the US Presidential election, it logged 15 million views. That number shot up to 34 million in February, and in March it hit 40 million views, with each viewer staying on the site for 18 minutes per visit. The site has already racked up 900,000 comments.

What’s driving those numbers, however, isn’t the live television imprinted into the product’s name. It’s the video clips – highlights from the daily broadcasts, essentially – that are distributed across the Huffington Post and AOL’s media properties. In seven months, HuffPost Live has produced 10,500 such clips, which account for the vast majority of online views. In response to the popularity of the clips, Sekoff has shifted some of the network’s production resources to post-production. “We’re building two businesses at the same time,” he says. 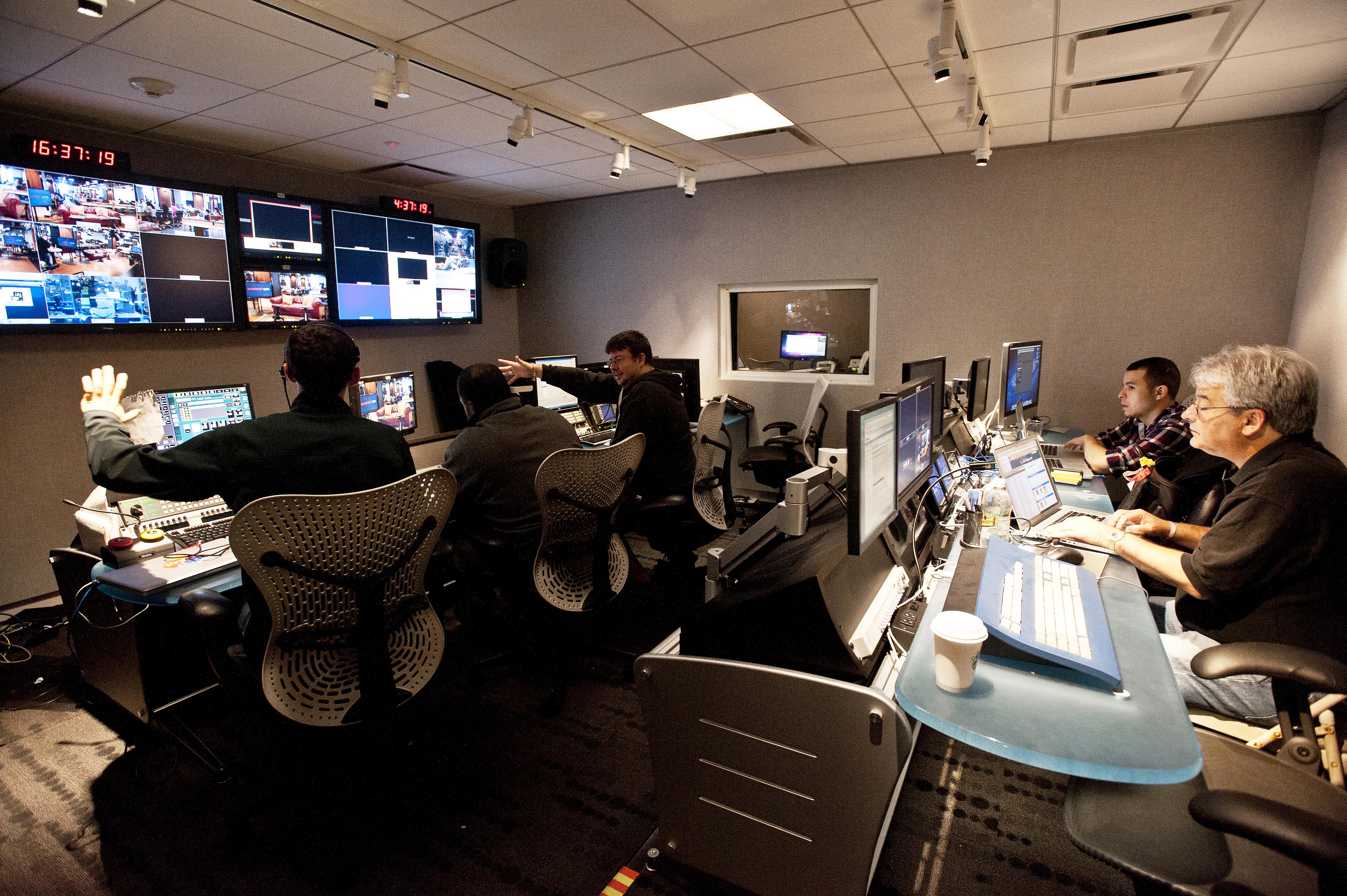 Perhaps in part because of that split focus, the HuffPost Live viewing experience leaves much to be desired. It would be unfair to judge the company purely on what it has produced so far, but it would also be disingenuous to overlook the many flaws in its actual product. While the technical production standards are all top-notch – including the set, the quality of the picture, the underlying streaming technology, the design of the website, the story flow – the content can sometimes be cringe-worthy.

A large part of the problem lies in how the hosts interact with remote guests and community contributors, which unfortunately is central to the very HuffPost Live experience. In many cases, the shows will host a multi-person panel – often with four people at a time – who are taking part via a Google Hangout. In some one-on-one situations, they beam in via Skype or FaceTime. No disrespect to these VOIP technologies, but they simply aren’t broadcast worthy – or at least, they’re not if you’re building a serious video network around them.

For a start, the sound during such interviews is often substandard – worse than AM radio quality – and sometimes guest’s unreliable at-home microphones fail, meaning they have to instead call in on a landline or a cellphone, which produces even crappier sound and look ridiculous to boot, essentially positioning HuffPost Live as only a slightly elevated version of talk radio.

The picture quality for these streams is often terrible, too, with slow bit-rates chunking up the images. That’s to say nothing of framing. In random snippets of live segments on the site over the last couple of days, HuffPost Live was seen to feature a woman who leaned so close to her webcam that both her forehead and chin were lopped off; a guy whose head occupied only the lower fifth of the screen and who later swivelled in his chair so the audience could only see him side on; and a chap whose camera was looking up from below his chin in extreme-close-up so that he looked like some kind of drunk grim reaper.

Other guests seem to have trouble ascertaining whether or not they’re actually being broadcast. The refrain “Can you still hear me?” is not an uncommon one on the shows, and in an interview aired earlier today, the host actually uttered words that anyone who has ever spoken to their parents on Skype would well recognize: “Hey Clare, I think you’re muted – would you just click that microphone icon for me in the top right hand corner?”

Earlier in the day, a different host had an uncomfortable dialogue with a wall of silence.

Hip-looking male host: “Brandon, are you there?”

You can see why one former guest – who has said he won’t appear on HuffPost Live again – has called it “amateur hour.” A more forgiving critic would defend these... let’s call them quirks... as redolent of Internet culture. That line of argument holds that the rough edges make the shows more personable and relatable, and that expectations for production are lower for an online audience that is used to a DIY ethos and aesthetic.

Unfortunately, those rough edges too often also make the shows unwatchable. Many viewers would be willing to sit through a short one-on-one interview via Google Hangout if it’s with a really compelling personality and just for a short time – less than five minutes, say – but when a 20-minute segment relies on a Hangout-mediated gabfest between four broadcasting amateurs, one’s patience quickly subsides. Also, the Internet has grown up. People are accustomed to Hulu and Netflix levels of quality. Just because they’re willing to put up with grainy YouTube videos of cats doing somersaults in the kitchen, doesn’t mean they want all their TV like that.

These, however, are kinks that can be worked on and worked out over time. The HuffPost Live we know at seven months old is not going to be the HuffPost Live we know at two years old. The network does an excellent job of interviewing guests, including celebrities, on set, and it is in the process of building a powerful community that both draws from and helps build the neighboring Huffington Post community, which over the years has generated 225 million comments on the site and is still going strong. It is also giving air time to issues that are often marginalized by the mainstream media, whether it be discussions of LGBT and African-American issues, or foreign policy and drones.

Of all the American broadcasters, too, HuffPost Live is perhaps the best positioned to capitalize on a specific set of tech trends that are reshaping the way we consume media, including an increased demand for access to content on any device at any time, a push towards social, and a desire for more platforms where audiences are spoken with as much as they are spoken to. Couple that with the distributive clout of AOL and Huffington Post and you get a platform that could have serious longterm relevance in the new media landscape.

For now, however, you're best off sticking to the HuffPost Live highlights reels.