Magzter is a digital magazines giant that has come from nowhere (well, okay, Asia) to sign Hearst and Newsweek

Okay, you probably know of Apple’s iOS Newsstand, and you might have heard that Google is planning to launch its own newsstand for Android – but have you heard of Magzter?

It’s a cloud-based, cross-platform magazine platform that launched in 2011 and has 7 million users, a number that’s now growing at a rate of 1 million per month. Its reach is largest in Asia and extends into even China and the Middle East, but it also claims 2 million users in the US. It hosts more than 1,5000 magazines from 600 publishers on its platform, and now it is coming at the US with a vengeance.

Today, the company is announcing that it has signed magazine giant Hearst – publisher of ELLE, Cosmopolitan, Esquire, Seventeen, and Marie Claire, among others – which is putting all 21 of its titles into Magzter. The Hearst signing comes on the heels of similar deals with Newsweek, Inc, and Fast Company.

Magzter skirts Apple’s Newsstand by sitting as a separate app but still benefits from the App Store’s subscriptions system thanks to a four-month negotiation with Apple that allowed Magzter to put a firewall between the customer and the app, so it can collect consumer data. That Magzter shares that data is one of its advantages over competitors, such as Zinio and Amazon. It’s also one of the reasons Magzter is able to get away with an almost astronomically high 50/50 revenue split.

Publishers have proven willing to accept that revenue share because they need only to upload their files to Magzter’s cloud-based publishing system and then forget about it – at that point, their work is done. Then Magzter pushes the digital magazines to Android, iOS, and Windows 8. Because their data is stored in the cloud, consumers never lose an issue, even when they switch devices, and they can also read the magazines on the Web at Magzter.com. Meanwhile, publishers also get access to a Magzter dashboard, which provides live analytics on magazine sales, downloads, and about which articles and ads are being read, and for how long. 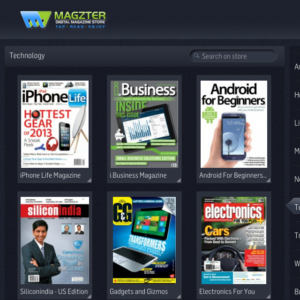 For now, about 90 percent of the titles on the Magzter are straight PDF replicas of the print editions, but the rest are at least partly interactive. However, the system also supports HTML5 and XML, and it lets publishers insert new ads on the fly. Magzter has also launched a prototpye tool called Mag Fly, a DIY HTML5 engine that integrates with Adobe InDesign and allows publishers to build fully interactive magazines with special features such as slideshows and ecommerce tools. Forbes India is one of the first Mag Fly customers.

Magzter co-founder and president Vijayakumar Radhakrishnan (pictured above left) predicts that within the next year and a half the split between PDF replicas and fully interactive digital magazines will be about 50/50, which is why he sees potential for Mag Fly. “In the next eight to nine months, we see a bright chance for our tool to be used by many other top publishers across the globe,” he says.

Radhakrishnan and his co-founder, Girish Ramdas, are serial entrepreneurs from India who have grown their company to 50 people in the space of two years. The company’s engineering team is based in India, but it also has a presence in New York, London, and Singapore. The startup raised a $3 million Series A round and is now in the process of raising a Series B of about $10 million.

There is considerable fragmentation in the digital magazine market, with publications split between Apple Newsstand, the Kindle Fire, and Zinio, among others. But Radhakrishnan sees that as evidence of opportunity. For example, Maxim magazine has editions on Magzter, Kindle Fire, Zinio, and Newsstand, as well as its own app, he notes. “That shows that the market is wide open.”

Where Magzter might ultimately run into trouble, however, is if magazines decide to move away from bundled versions of their digital products and instead distribute individual stories around the Web. If that does actually happen, however, it could be a long way off.

And now a merry piece of trivia to finish the article: Magzter co-founder Ramdas has won six Indian national gold medals in the sport of rifle shooting and holds a national record for one event. Lesson: You probably don’t want to be in his crosshairs.