New gesture-control app: Look away to pause your video, "shhh" it to shut it up

Six months after we wrote about the three guys in a Santa Clara garage who are turning our eyes into remote controls, there’s finally an app to show off some of their handiwork. The bootstrapped startup Cube26 – formerly known as Predict Gaze – has today launched an iOS app called the LookAway Player, which lets you pause and mute YouTube videos with gestures. To pause a video, you simply look away; to mute, you raise your finger to your lips in a “shhh” gesture.

Engineers Saurav Kumar, Aakash Jain, and Abhilekh Agarwal have been toiling away on their natural vision control technology for months while holding down full-time jobs in Silicon Valley, with help on the business development side from Ketan Banjara, an ex-Yahoo executive. The software we described back in October not only lets you control smart devices such as phones, tablets, and TVs with your eyes, but it also performs facial recognition in pitch darkness, even when parts of faces are obscured with, for instance, sunglasses. And there’s no additional hardware required. (Check out our original story to see a series of demo videos.)

In the meantime, Cube26 has been trying to raise funding and has been in discussions with various electronics manufacturers to get its technology out to market. It must have been a blow, then, when Samsung announced that announced that its Galaxy S4 phones would offer gaze-tracking. Samsung's move apparently came as a surprise to the Cube26 team.

Cube26 noticed the buzz in the wake of the Samsung announcement, thought, “Hey! We’re already doing that!” and decided to put out an app to show the world what it has been working on. The Look Away Player, then, isn’t really a fully fledged product with monetization plans in its future – it’s pretty much just a demonstration of the technology. It was cobbled together within a couple of weeks, CEO Kumar says. It’s similar to Flutter, which offers gesture control through the webcam through a desktop app. However, Flutter isn’t available for mobile.

The app is basically a re-skinned YouTube player with Cube26’s software baked in, allowing you to watch videos on your iPad or iPhone and pause and mute them without having to sully the screen with your fingerprints. The experience is slick, but not perfect. The UI, for a start, could use some work, and, on test runs with my iPad, I sometimes managed to mute my video without meeting to (but then, I do scratch my face a lot). The “look away” function, however, was almost perfect, and is potentially very convenient, especially if you have a cat that frequently demands your attention while you’re watching videos. You can also adjust the control sensitivity in the app’s settings, so you can tone it down if it gets a little trigger-happy for your liking. 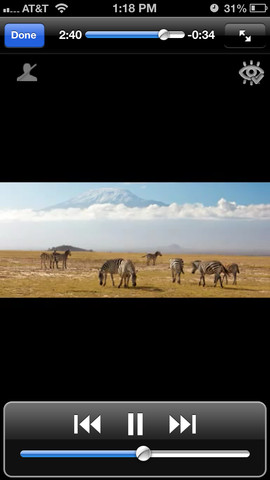 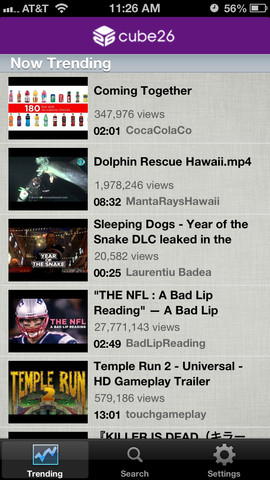 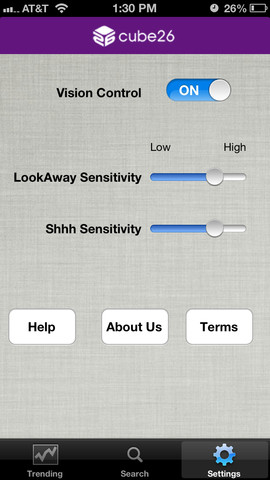 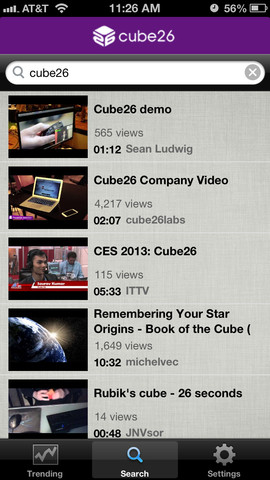