Newsana: A community-driven news site (in case you needed another one)

Plenty of people recognize that, thanks to the likes of Twitter and the 24-hour news cycle, Internet-connected people now have a news saturation problem. And in fact, so many people are trying to solve that problem that we now have a news-filter saturation problem. On the news reader side, there’s Flipboard, Zite, Prismatic, News360, Pocket, and for community-driven news sites there’s Digg, Reddit, Quibb, and Good.is. That’s just to name a few.

One thing you could say about the space, I guess, is that there’s no clear winner. So you can’t really fault Newsana for trying, even though the news social network is late to the game. The Toronto-based site, which promises to “elevate the conversation,” launched in open beta today with a mission of highlighting high-quality content hand-picked by members of its community.

The way Newsana works is that you build a profile on the site and then “pitch” stories you come across that you think would be interesting to the Newsana community, which is organized around various verticals, including Arts & Entertainment, Media, Business, Social Issues, and Technology. In the future, Newsana will host many more verticals, including ones that are localized – for example, your city’s local politics. 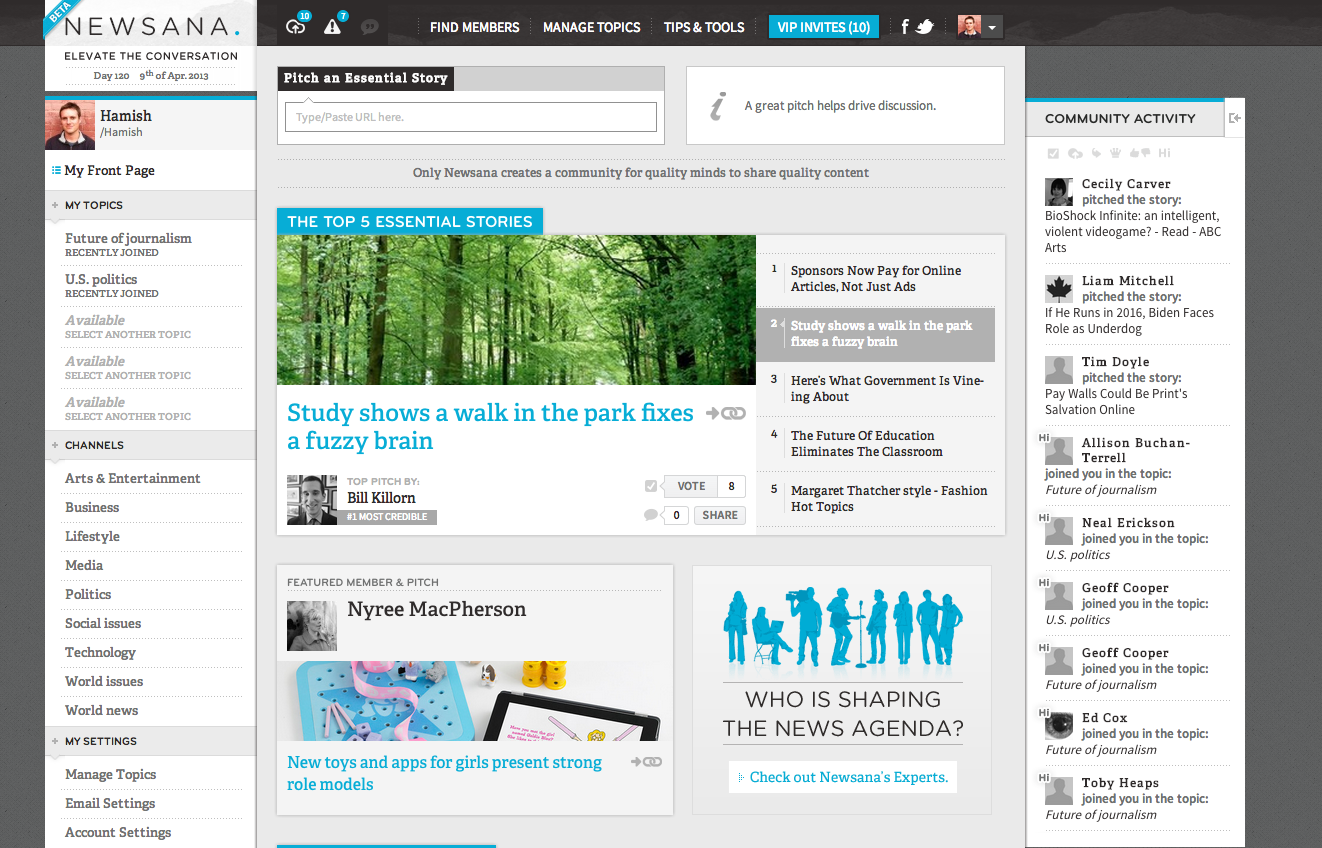 To pitch a story, you copy and paste the URL into Newsana and add a comment. (A bookmarklet is on the way to make the process easier.) If your peers think that the story you pitched is worthwhile, they’ll vote it up. Newsana then showcases the top five stories in each section. Every vote your pitch gets earns you credibility points that contribute your “ranking” within each section. Newsana’s hope is that the gamified elements will help motivate users to be highly active in the network.

Like Quibb and Quora, Newsana wants to curate a community of smart and like-minded people. It has strict community guidelines, asking members to apply and “show they are passionate about making the Internet a better place,” while also banning “hateful comments.” Each member is allowed to invite 10 people to sign up to the site per week.

The site faces a very tough road ahead to even survive. It has a chicken-and-egg problem around its community, on which it will be heavily reliant for success. Building that community in the first place will be difficult, because it asks a lot of its members, who have plenty of other places to share content, even outside the obvious networks such as Facebook and Twitter. Also, getting people to build yet another online presence and interest graph on yet another news-reading platform is a big ask. Finally, the idea that “high quality content” is a compelling enough reason for members to stick around is questionable, especially given the plentiful other options for quality community discussion and interest-driven news filtering.

Newsana was founded by Jonathan Wong and Ben Peterson, who co-founded Canada’s Journalists for Human Rights and served as its executive director for nine years. It has raised $500,000 in seed funding and eventually plans to monetize the site with sponsored stories and other community-oriented features.