If Square wanted to hire someone who was a front-end designer with expertise in HTML5 who just happened to also be a lover of jeans made from cotton picked in Zimbabwe and woven by artisans in Japan, there’s a chance the company could find that person on Zerply.

Zerply started life as a portfolio site for creative types, and especially designers and developers. However, as the two-year-old company today launches its first attempt to bring in serious revenue, it looks like it’s about to transform into tag-driven jobs board.

Like an elaborate About.me, Zerply lets its creatively-inclined users create beautiful professional profiles and then add tags that best describe their work, interests, and personalities. The profiles are also tied to a social graph, so that peers can endorse each other’s work or follow their activity on the network. Prospective employers and recruiters, meanwhile, can use Zerply’s search function to identify people whose skills and interests match their needs, no matter where they are in the world and even if those interests happen to include a pretentious predisposition for handcrafted wabi sabi jeans. 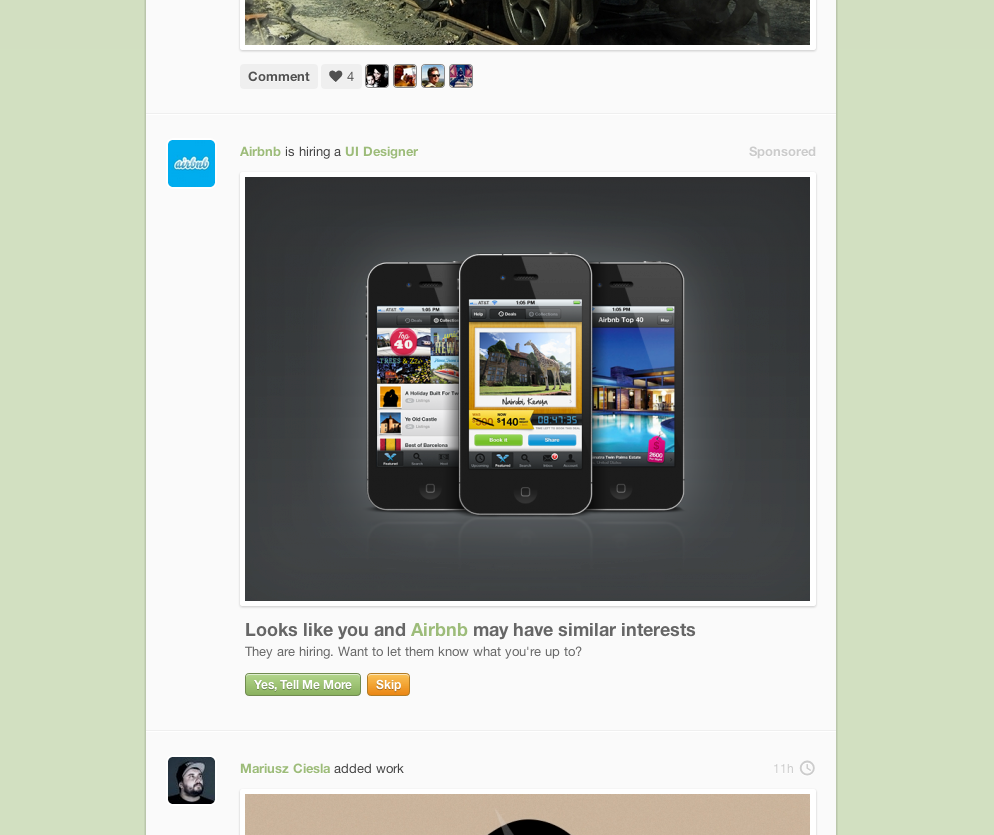 An example of a promoted opportunity on Zerply

Today, the startup is taking that job-matching element a step further by allowing companies to post opportunities on the site. Zerply reads those postings, notices which tags are used to stipulate what kinds of people the companies are looking for, and then suggests to relevant people in the network that they check out the jobs that are available. Square, Airbnb, Kickstarter, Etsy, and Yelp are the first job advertisers on the site. For now, Zerply is charging them per job posting, but it plans to introduce a subscription-based model later.

Zerply co-founder and CEO Christofer Karltorp, a Swede who moved to the US in 2010, says he hopes the service reaches people who weren’t even necessarily looking for a job. He envisages a situation in which a Zerply member gets pinged with a note saying, “It looks like you and Square have similar interests.” Even if that person isn’t in the market for new employment, she or he might look at that and think it is too great an opportunity to not consider. “That’s how we would like to be approached ourselves,” says Karltorp, who has a background in Web services.

Karltorp talks a lot about the growth of the freelance economy and how it will require people to have a strong online presence to verify that they have the skills they claim to have. In that vein, he says, Zerply's mantra is “Pics or it didn’t happen.”

Zerply has 90,000 members, but it also faces intense competition. It’s not the only company with the bright idea of trying to make money from the recruitment process by making it more social and designer-friendly. On the portfolio-oriented side, Dribbble and Behance are tough contenders, while the contest-driven marketplace 99 Designs is also playing in the same space. In London, The Backscratchers recently launched in closed beta to serve a similar purpose. And that’s to say nothing of LinkedIn, which has a gorilla grip on the recruiting market.

Perhaps one thing in Zerply's favor is its Northern European connection. While its operations are based in San Francisco, its core team and engineers are in Tallinn, Estonia, a bubbling startup scene in a small nation that enjoys the benefits of being one of the most advanced Internet countries in the world. Estonia not only tops the Internet Freedom index, but it also has a government that is supportive of innovation and technology. In fact, President Toomas Hendrik Ilves even has a profile on Zerply, likely because one of his top advisors hails from Skype, which also bases its engineering operations in the country.