Kik ups the stakes in the consumer Web's most important battle: mobile chat

Today marks the culmination of Kik’s two-year project to build an HTML5 platform, heralded by the arrival of push notifications into its messaging app. Many developers think HTML5’s lack of push notifications has been the only thing that separates Web apps from native apps. While Kik lives as a native app on Android and iOS, its entire product is built in HTML5, an advantage that founder and CEO Ted Livingston believes will help the Canadian company win a zero-sum battle to become the world’s dominant mobile chat app.

Key to Kik’s vision is that chat is a front door to a platform on which the company will build its audience and its business. Having that platform built in HTML5, he thinks, is what will separate Kik from the competition, which is now white-hot in intensity. Not only is a platform built in HTML5 hard to copy, but it also opens up the app for sharing content and playing games between friends without everyone having to own the Kik app to participate. It is a more open approach to mobile chat.

The push notifications are the final piece in the HTML5 puzzle for Kik, and they are something no other company has been able to build. In this execution, they are simple – users are notified by a glowing blue ball in the app when is time to view shared content, or play a turn in a game.

“I’m hoping that, looking back, today will make the day that the world realized the scope of what we’re doing,” Livingston says. 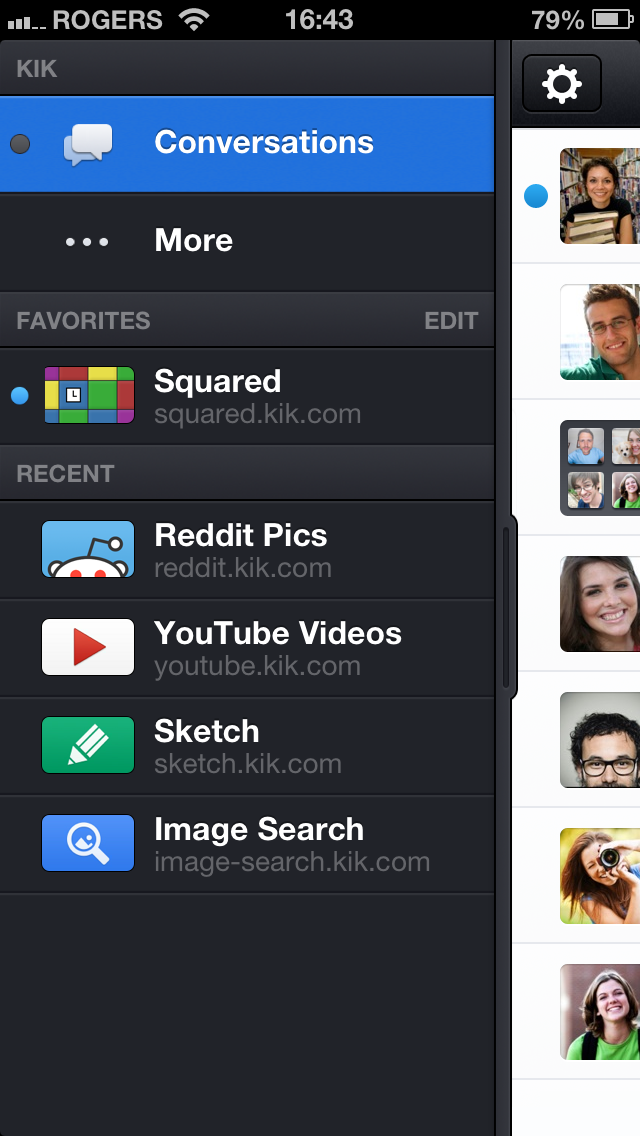 This is not a minor concern. The mobile messaging wars have reached a critical point, reminiscent of MySpace versus Facebook, or Netscape versus Internet Explorer – except this time 2 billion people are online and most of them are accessing the Internet primarily through mobile. The next 2 billion will come online for the first time through mobile only.

You don’t need to look far for proof of how important chat is to this new Internet era. Just the other day, Facebook announced Home, its new user experience for Android  that backgrounds the Newsfeed and shunts Facebook Messenger to the front and center of the phone, and even over top of other apps while they’re in use. Realizing that we are already “chat heads,” Facebook decided to just go ahead and give Home’s most prominent feature that exact name.

Then there are the rumors around WhatsApp, which we have been told was going to be acquired by, first, Facebook and, then, Google. Coming soon, according to new reports and rumors, is an ambitious cross-platform messaging service from Google called Babel, apparently set for release at I/O. MessageMe has picked up 1 million users in short order, got blocked by Facebook, and scooped up nearly $2 million in venture backing. Just.me, which is in beta, is set for a full launch soon, and it fancies its chances at taking over chat and social sharing.

In the meantime, mobile chat apps in Asia are absolutely crushing it. China’s WeChat claims more than 300 million users; Japan’s Line has more than 100 million of its own and its stickers system has been copied by Path; and South Korea’s KakaoTalk is aggressively building a platform that promises lucrative opportunities not only in games, but also in ecommerce. It has just launched KakaoPage, a marketplace within the app that lets anyone buy and sell digital content; it's an easy eBay for virtual goods, adapted for thumbs.

In fact, if you’re going to look at any mobile chat app for evidence of where this whole market – and where the consumer Web – is headed, then KakaoTalk is the one to watch. Although with “only” 80 million users it is smaller than WeChat and Line, it is demonstrating the power of a mobile platform through gaming. Recent stats, in fact, show that 16 of the top 20 mobile games in South Korea were downloaded from Kakao, and all of the top eight games came from the platform. This is Facebook-grade penetration.

Among all this frantic competition and development, Kik is something of a dark horse. Today it is announcing that it has 50 million users, and that it has delivered 25 million “cards,” its way of sharing rich media within the app. Kik’s Livingston believes that there are only five real players left in the race to the top for mobile chat apps: WhatsApp, Line, KakaoTalk, WeChat, and Kik.

He doesn’t believe that Facebook or Google can win in chat, because they are adapting desktop-first social networks for the mobile era. He argues that that matters on a subconscious level, because when people chat by mobile they expect an immediate response, whereas on the desktop you can never be sure if the recipient has seen the message. In that sense, getting a message via Facebook Messenger is essentially the same as getting an email, he argues – it’s something that can be left until later.

“It’s not a mobile-first community,” he says of the Facebook and Google approach. “It’s a bunch of desktop communities with mobile access thrown together. It’s the classic hope that more is actually more when in reality in mobile, more is actually less.”

That “less is more” ethos is also the reason why Kik has resisted adding more social elements, such as a timeline, into its app, which sets it apart from the Asian heavyweights – WeChat, KakaoTalk, and Line – which have developed into mobile social networks.

Livingston’s belief that Facebook and Google can’t be forces in chat, however, might prove to be ill-advised. Even though Facebook started life as a desktop-oriented platform that was slow to adapt to mobile, the power of its 1 billion member network cannot easily be dismissed, and as it has shown with Home, it is pivoting hard into mobile. In January, moreover, Facebook Messenger was the No. 1 non-game app downloaded for iOS, and the No. 4 for Google Play, according to AppAnnie.

Regardless, Livingston now sees the mobile chat wars as a race to build the best platform. Whoever can do that wins the whole world, he thinks. Mobile chat will not be regional game for long, just as regional social networks in the desktop era all ultimately fell to Facebook.

By taking two years to quietly build what is effectively a mobile browser with chat as the front door, Kik has largely been consigned to the sidelines as Asia’s chat giants, as well as Facebook and WhatsApp, have hogged the headlines. Now the game is really on.