Amazon and the tyranny of the EPS

Of all the things in Jeff Bezos' most recent annual letter to shareholders, the words that caught my eye were these: “I frequently quote famed investor Benjamin Graham.”

Graham, of course, is the father of value investing, buying stocks that look underpriced by some measure of fundamental stock analysis: book value, dividend yield and, most famously, the price-earnings ratio. In recent decades - especially in tech industries, where companies paid little or no dividends - earnings per share and PE ratios have taken on a disproportionate, even distorted importance in valuing stocks.

Net earnings per share is the bottom line, the headline number in quarterly earnings reports, the one wire services usually send out first to investors. Divide the share price by the EPS and you have a ballpark idea of whether a company is cheap or expensive. It's a handy rule of thumb. But it is not the only rule, although sometimes in stock market coverage it almost seems it is.

There are notable exceptions to the PE rule, and Amazon is one of the most notable. For years, the stock's PE traded near 100 until Amazon began devoting even more spending to R&D, making Kindles and selling them at low prices, and adding more benefits to Prime subscribers.

All of that pushed Amazon into a net loss in 2012 of $39 million, or nine cents a share. Right now, analysts are expecting the company to earn $1.48 a share this year, valuing the stock at 184 times forecast 2013 earnings. By the primary measuring tool of value investing, Amazon looks like the opposite of a bargain.

To anyone familiar with Amazon's history in the stock market, this is nothing new. The stock has defied short sellers waiting for a correction in the stock price that never came. In 1999, Barrons magazine ran a cover story famously called “Amazon.bomb” but a decade later was calling the company the world's best retailer.

In recent years, Bezos' shareholder letter has turned into something of an annual victory lap in his decade-long competition with Amazon stock bears. Namechecking Ben Graham may be a way of tweaking critics who chided him for poorly serving shareholders by delivering so few retained earnings over the years.

But it's also notable that the Graham quote Bezos used - “In the short run, the market is a voting machine but in the long run, it is a weighing machine” - has appeared in shareholder letters before. Back in 2000, Bezos began his letter with a one-word sentence: “Ouch.” After noting that Amazon's shares had fallen 80 percent since his last letter, Bezos invoked the same quote by Graham. It bookends Amazon's 1999 net loss with the modest 2012 loss. Amazon is much healthier today, but as Bezos points out in both letters, the company's long-term focus on customer experience is a constant core element.

Stocks like Amazon and Netflix that are able to maintain a high price-earnings ratio year after year are sometimes used to knock fundamental analysis in general. In a market where high-frequency trading accounts for more than half of U.S stock volume and where the traditional buy-and-hold investor becoming more and more marginal, fundamental investing is considered by some to be an anachronism, if not a joke.

But Amazon defies fundamentals only if one is obsessed with the bottom line. Graham's approach to value investing saw fundamental analysis as a toolbox for finding undervalued stocks. As Jason Zweig pointed out recently in the Wall Street Journal, Amazon's spending on R&D and marketing (through discounts like Prime) account for a good chunk of its operating costs. As long as that spending is investing in Amazon's future, they aren't a long-term concern for investors.

In that case, Zweig argued, looking at Amazon's gross profits ($16.8 billion on revenue of $61.1 billion over the past four quarters) may offer a better insight into how successfully the company is managing its growth. Unlike Groupon, which tried to offer a similar metric in its IPO prospectus before the SEC nixed it, Amazon has a steady track record of turning that investment into strong revenue growth. Amazon's controversial discounts and spending of years past is driving more and more business today. 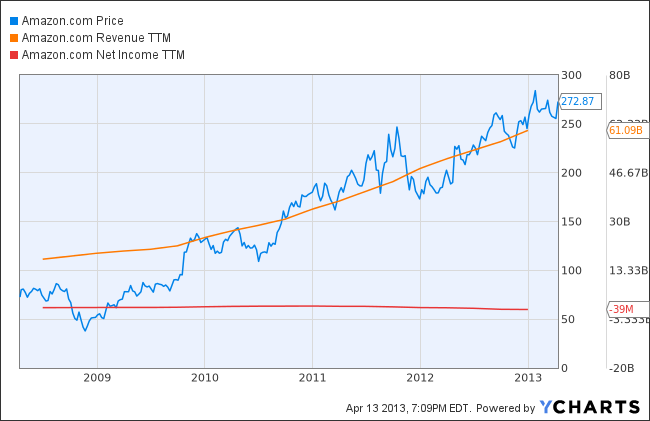 Charting Amazon's five-year stock performance against its revenue and net income shows that the investors are confident enough in Amazon's future revenue growth that they are consistently willing to tolerate slim profits and the occassional slip into red ink. In a market dominated by program trading and daytrades, Graham's weighing machine still seems to be working just fine.

Amazon's stock performance isn't at odds with the tenets of value investing. Despite an absurdly high PE ratio, the company Jeff Bezos built would fit right into the market Ben Graham imagined it.