The 15-hour flight from San Francisco to Sydney is a rough one for humans, but it's even more difficult for money. When it comes to fundraising, Australian startups really feel the pain of geography. Not that many American investors make the long schlep across the Pacific. So, if Aussie startups need to get capital from outside the small pool of investors in their own country, they have to spend a lot of time on the ground in Silicon Valley or hope for a serendipitous encounter somewhere along the way.

That's what's remarkable about Canva's recent $3 million seed round, which includes a list of investors that, for the most part, have California addresses, including Bill Tai of Charles River Ventures and Lars Rasmussen, Facebook's director of engineering and a founder of Google Maps. The Sydney-based collaborative design startup which is still in stealth mode got its funding break as a result of a single five-minute meeting with Tai.

Canva co-founder and CEO Melanie Perkins first met Tai, briefly, at a conference during the tail end of her involvement with her first startup, Fusion Books, an online platform that provides design tools for publishing yearbooks. It is now Australia's largest yearbook company and has since expanded to New Zealand and France. Fusion Books was based in Perth, where Perkins and co-founder Cliff Obrecht were living and had started the company straight out of university. As a result of their first encounter, Tai invited Perkins and Obrecht to his kiteboarding group and investor meetup event MaiTai, which visits Perth every year.

At MaiTai, the young founders gave what Perkins says was their "worst pitch ever," which involved a hurried and unrehearsed presentation to one investor. It didn't go over so well, so they spent all night revising their pitch deck, a process that would eventually come to involve hundreds of iterations and sharpening their spiel. The work paid off. The MaiTai event eventually led to investments from Dave Bagshaw, the former CEO of Shutterfly; Ken Goldman, the CFO of Yahoo; Jean Sini, CTO of Mint.com; and Rick Baker, head of new Australian investment firm Blackbird, among others. The connection to Baker led to email intros that in turn led to more investments, including one from 500 Startups, whose boss Dave McClure even showed up to Canva's office launch party in Sydney, where Perkins, Obrecht and company moved in February last year. 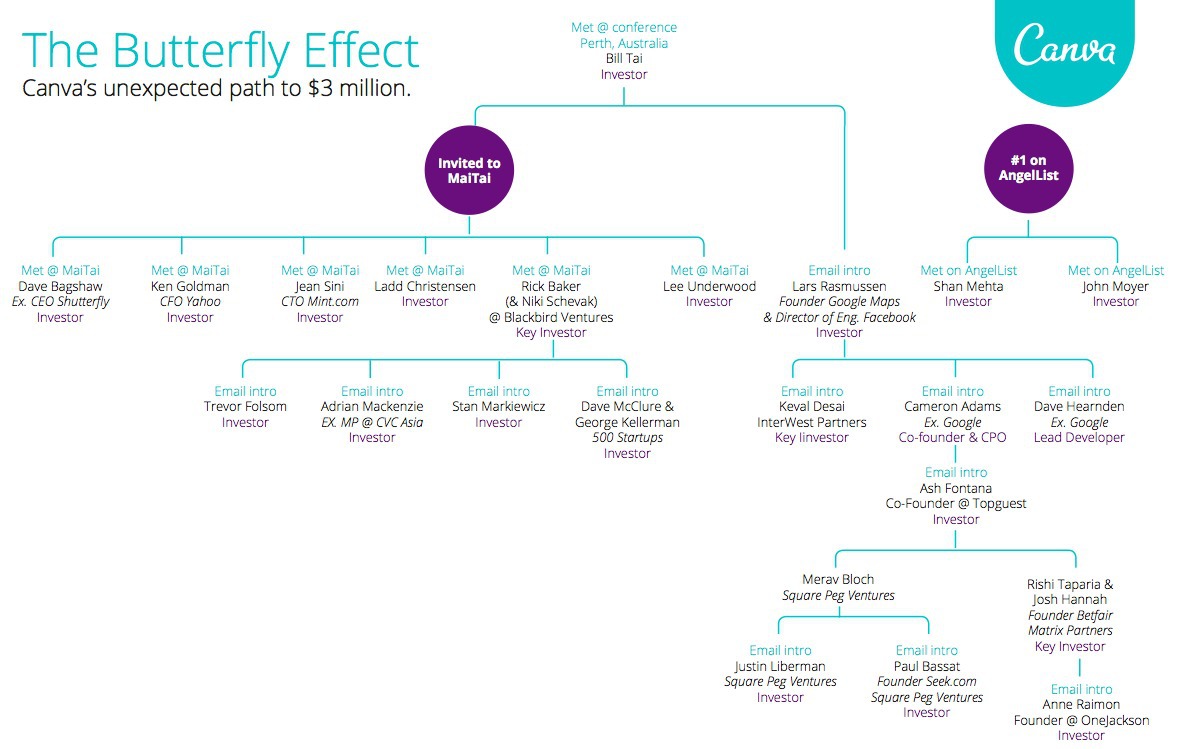 Meanwhile, Tai introduced Canva to Lars Rasmussen, who came on board as an investor and helped Canva interview and recruit an engineering lead and a chief product officer. Those connections then helped bring in investments from Matrix Partners, InterWest Partners, and a handful of other angels. The only money that Canva raised in its seed round that didn't stem from that chance meeting with Bill Tai came through AngelList, on which Canva was a trending company, and a grant from Commercialisation Australia that was worth more than $1 million.

Canva's experience is testament to the power of network effects, and how one key introduction can change the fortunes of an entire company completely. It is also further proof that a company from a small and distant country with global ambitions can attract financing from big-shot American investors, provided it can rally those people around a grand vision. For her part, Perkins says meeting Silicon Valley investors who believed in Canva's vision and ideals was like "finding your kin."

As for Canva itself? Well, its beta launch is still a couple of months away, and Perkins is staying tight-lipped about what exactly it will do. The company's LinkedIn profile, as TechCrunch has noted, says that it will help amateur users design Facebook cover photos, new business cards, presentations, menus, and brochures. Apparently, there will be a premium version for professional designers, too. When it launches in June, probably on an invitation-only basis, it will do so first in the US and Australia.