Gamedesk's "Classroom of the Future." Why is it so hard to reinvent K-12 education?

If we've learned anything from this month's series on ed-tech it's that changing centuries-old education traditions takes more than a touchscreen and good intentions. For all the exciting innovations put forth by the ed-tech movement, there remain fundamental challenges, including how to properly motivate students, how to navigate the internal politics of school districts, and what to do when the technology crashes.

That's why I was eager to catch up with Lucien Vattel, CEO and founder of Gamedesk, an LA-based non-profit that is designing what it calls "the classroom of the future." I first saw Vattel at Mindshare LA, a three-day technology and art festival celebrating some of Los Angeles' most creative minds and companies. As we in the audience sat warmed by the LA sun, craft beer, and vegan tacos, feeling good about the world and ourselves, we quickly became believers in this brave new model of education based on imagination and play. (Who wouldn't?) It didn't hurt that Vattel's talk came immediately after the keynote speech by Atari founder and professional dreamer Nolan Bushnell.

Now it's one year later, and the inaugural 40 person class of sixth graders is preparing to graduate from Gamedesk's experimental Playmaker school. With US students lagging behind other countries in subjects like math and science,  fresh new strategies like the ones put forth at the Playmaker school are more crucial than ever. But is the way forward to let students run wild with their imaginations and iPads? And if so, how can Gamedesk realistically expect to scale their approach to the rest of the country to have a significant impact on America's education crisis?

It was time to check in with the program's fearless leader: 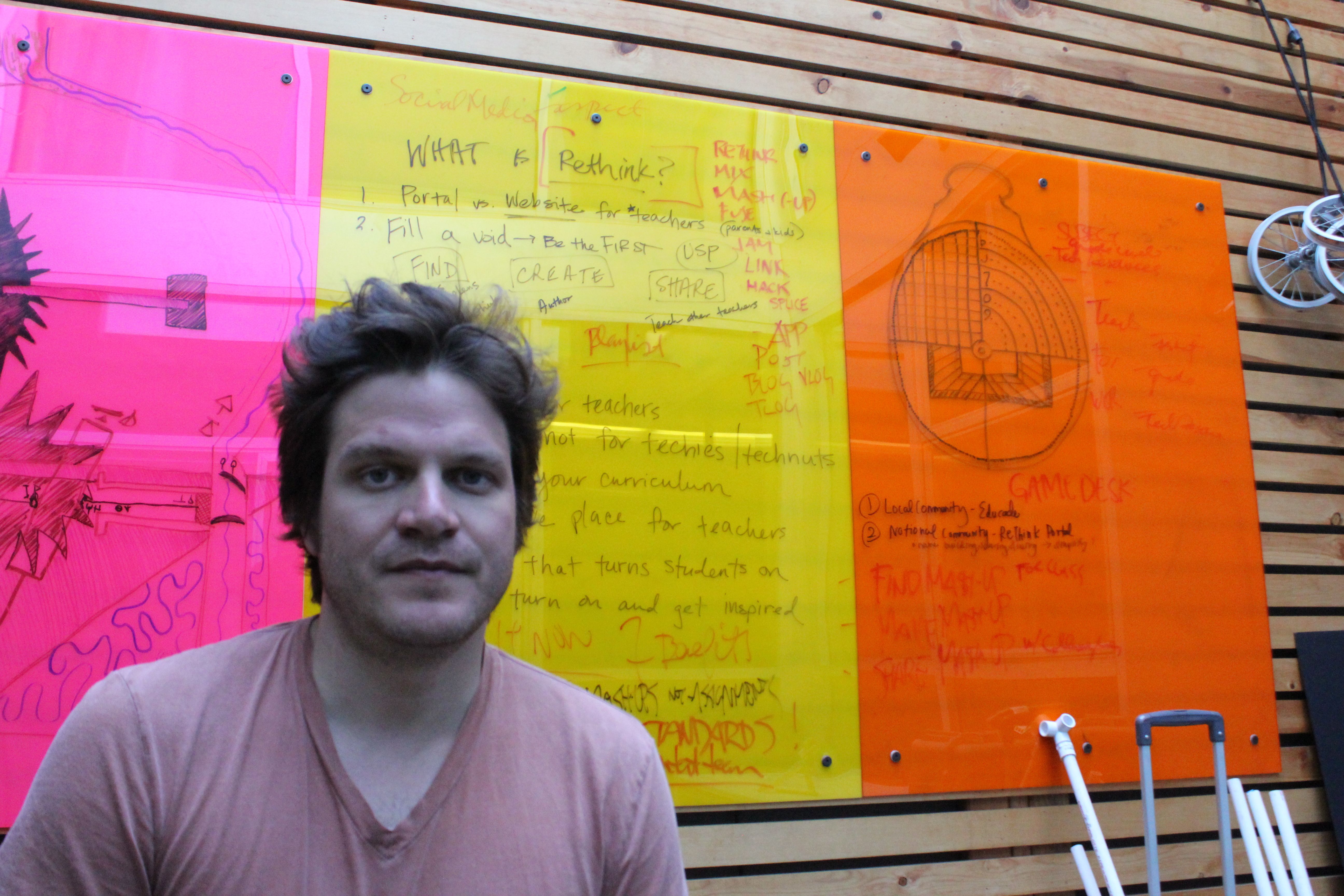 I didn't expect Vattel to have all answers after just one school-year. In talking with him, however, it's clear that the company has made significant progress. Vattel and his team of teachers and developers have learned a number of lessons over the past eight months, like that low-tech or no-tech solutions (like roleplaying games) are often as effective as high-tech solutions, a fact that bodes well for the company's goal of spreading its model to the rest of the cash-strapped country. They also found that even the brightest, most eager students can get burned out by the glitz and glam of high tech videogame pedagogy, and that chasing the whims of your imagination can be as mentally-taxing as memorizing multiplication tables. 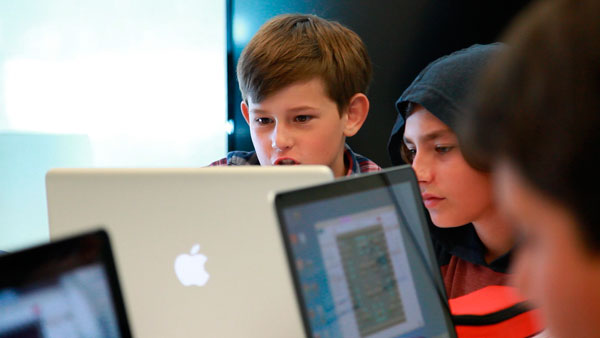 These kids' computers are better than yours. [Photo by Greg Waigand]

Gamedesk was born in 2009 out of a games lab Vattel ran at the University of Southern California's engineering school. The lab conducted research on how game mechanics related to learning and other cognitive processes. Vattel says his research was progressing well until one day when he was approached by a group of teachers from a Watts, Los Angeles public school with a 0-2 percent proficiency rate in math and science.

"We had a bunch of teachers come in and say, 'This is so cool; we love your lab. You guys are great. Have you ever helped a kid?' And the answer was no, and it was a real sobering moment for me."

And thus Gamedesk was born to help test Vattel's theories about play and learning in a real classroom environment. "What Gamedesk does is two-fold," he says. "We build our own games, but we also repurpose other people's games into our curriculums." One example of a game built by Vattel's team is Aero, which teachers students about aerodynamics and the physics of flight by letting them strap on wings made of fabric and repurposed Wii controllers.

The Playmaker School is Born

The latest and perhaps most important development in the Gamedesk story came last September when Vattel launched his long-awaited "classroom of the future." Called Playmaker, it's a full-time school operating out of New Roads, a private K-12 school in Los Angeles. Originally, Vattel wanted to start his own charter school but felt that he lacked the "bandwidth and political acumen" to run and maintain a school while also trying to completely rethink education. In keeping with New Roads' admission process, a portion of the students come from more affluent communities and pay tuitions while others attend free.

"They're one of the most integrated schools in Los Angeles," says Vattel, whose work has historically focused on at-risk communities. "It's not just about the content that you're learning, but it's about having friends and relationships and communicating with people that are outside of your norm. That's an education in itself."

The learning space is made up of three rooms which represent the three principles guiding Playmaker's curriculum: Creation, imagination, and adventure. In the "maker" space, students build simple machines, Rube-Goldberg structures, and even their own video games. In the "ideation" space, students and teachers dream up projects and curricula based around their own interests and imaginations. And finally there's the "adventure room" which Vattel describes as "summer camp" with different multimedia stations. This is where large group activities take place including historical role-playing scenarios and collaborative video gaming.

Creation? Imagination? Adventure? It all sounds a lot more exciting than staring at a chalkboard. But it also sounds a bit more like indoor recess than education. Are the kids actually learning?

Vattel says yes, and despite the freeform nature of many of his learning modules, the curriculum is still geared toward nationwide education standards. "Even though we're doing it in a private school, it's a public school project. so everything we're building we are setting up to port to the national public so that other people can adopt it."

That said, the first year hasn't always been easy. One of the biggest problems the Playmaker faculty encountered was overstimulation. "Kids didn't want the next day to be less engaging, but at the same time they were extremely exhausted from the previous day." Vattel also found that encouraging students' to pursue their own interests was a lot harder than expected. While the curriculum included a wide variety of activities geared toward different interests, there weren't always clear pathways from one learning module to the next.

Vattel's response to both is simple: Build more learning modules, including some designed as breathers and breaks from the more intense material. But as the material and curriculum continues to expand, it raises the question: How are other schools, especially cash-strapped public schools, expected to replicate these models? Not every classroom gets to operate out of a well-funded prestigious private institution. Nor does every school have the kind of support Gamedesk does, whose backers include the Bill and Melinda Gates Foundation, AT&T, and the National Science Foundation.

But that's not all.

"A Gamedesk classroom is a very different place from a normal classroom," says Steven Hodas, Executive Director of the New York City Department of Education’s Innovate NYC Schools program. "The entire environment was created to make that kind of experimentation easy. They swept away all the stuff that could distract from the learning and built the school from the ground up."

Hodas, who's worked in education for over ten years, emphasizes that what Gamedesk is doing is great for their own students and faculty, and that they're creating wonderful opportunities for companies that want to test educational products in a live classroom setting. But while the repeated failing and reiterating necessary for experimentation may work in a Gamedesk environment, Hodas says it's not always realistic or responsible to try in a public school.

"Any public school in New York or LA or Chicago is under tremendous accountability pressure. And if you try something staggeringly new, and you're not going to be successful, you've just put that teacher and that principal at risk."

But Vattel says it's less about other schools replicating the Playmaker model wholesale and more about teachers adopting individual modules that can be integrated into existing curricula. Using part of its $3.8 million investment from AT&T, Gamedesk will set up an online portal where teachers can go to select aspects of the Playmaker model that fit their budget, technological constraints, and time commitment.

"One of the things we've been doing for the past few months is we've been identifying, 'Okay, what is this process? Is it high-tech, low-tech, or no-tech?'" Some of the most valuable teaching tools require no new technology at all, Vattel says.

He's been especially impressed by the educational benefits of live-action role-playing, where students learn not only the times and dates of historical events, but the societal norms and gender politics that make far-off time periods feel more familiar while also providing emotional education that can help children understand their own world. An activity like that takes nothing more than a well-thought-out lesson plan and a willingness from the students.

"So if you're a teacher, and you're teaching science with the oldest computers in the district, here are the things that we've researched and figured out," he says. "Here's what you might try, what might be workable, what works within your time constraints, what works within what you're teaching, and is aligned to standards so it's most likely to be accepted by your principal."

And in terms of helping public schools adopt the high-tech lessons, Vattel emphasizes that across the country cities are spending millions of dollars on technological initiatives including projects to place iPads in the hands of public school students. While Vattel thinks this is a good thing, he says it's important for teachers to have resources like the ones provided by Gamedesk that shows them the most valuable ways to use iPads in the classroom. Otherwise, these technological initiatives could go the way of the SMART board, a supposedly game-changing educational tool that ended up costing school districts millions of dollars while showing no clear improvement in student achievement.

There are still many reasons to be skeptical that Playmaker's imagination-driven adventure land can (and should) be adopted across the country. Erin Griffith has written extensively about the challenges of changing education from the bottom up. it doesn't always make sense to target teachers then pray they'll become ambassadors for your product (education isn't like Dropbox). The fact that Gamedesk also plans to target parents down the line could give them an advantage. But Hodas says parents can be as big an obstacle for innovation as the administrators.

"(Parents) are counting on schools to do a certain set of things, and only 20 percent of parents have a high school diploma in some districts," Hodas says. "Is it right to do that kind of experimentation with other people's kids?"

That's why Hodas thinks organizations like Gamedesk are only half the equation when it comes to convincing teachers, administrators, and parents to try radical new approaches. "The real potential impact for wide scale effects requires translating," Hodas says, and that's part of what his team at Innovate NYC Schools is doing: Finding interesting new approaches like the ones pioneered by Gamedesk, and thinking about how they can be modified to a very particular set of classroom conditions. In other words, we can reinvent education, but we might have to do it one classroom at a time.

What Vattel and Hodas have in common is that they're both realistic about the challenges ahead of them, and they both realize that small improvements are better than no improvements at all. "We're trying to shift the needle on what we consider normal," Vattel says.

We would all love to change the world. But sometimes "shifting the needle" is enough.