One of the striking things about the startups I've talked to in New Zealand this week is their ability to work quickly and build products with very little funding. Several prominent startups here fall into that camp – Stqry, which took just four weeks to come to life, is a good example – but collaborative video-editing platform WIP has perhaps demonstrated the most remarkable progress in a tight timeframe, and with not much financial support.

The Wellington-based startup's co-founder and CEO Rollo Wenlock says he got the idea for WIP on November 18 and stopped by business incubator CreativeHQ on a whim to pitch the idea. Thanks to the incubator's connections, Wenlock met his soon-to-be co-founder Nick Green, who whipped up a crude prototype for the platform within a few hours. Barely six months on, WIP is a slick video-editing and annotation tool with drag-and-drop functionality and an intuitive interface that lets users write comments directly onto videos.

WIP, which is still in early beta, is primarily targeted at freelance and independent video makers and in-house video makers, for which it will charge monthly subscription fees – about $25 a month for freelancers and between $200 and $300 for production companies. Creators can upload videos to the platform and then invite collaborators to leave comments throughout the video – such as "We need a close-up here," or, "Cut to the girl sooner" – all of which are marked on the video player's timeline and time-stamped in a "to do" list displayed alongside. The system lets users keep track of all comments left on the video, and all versions of the video. In other words, WIP is, as Wenlock describes it, "track changes for video." 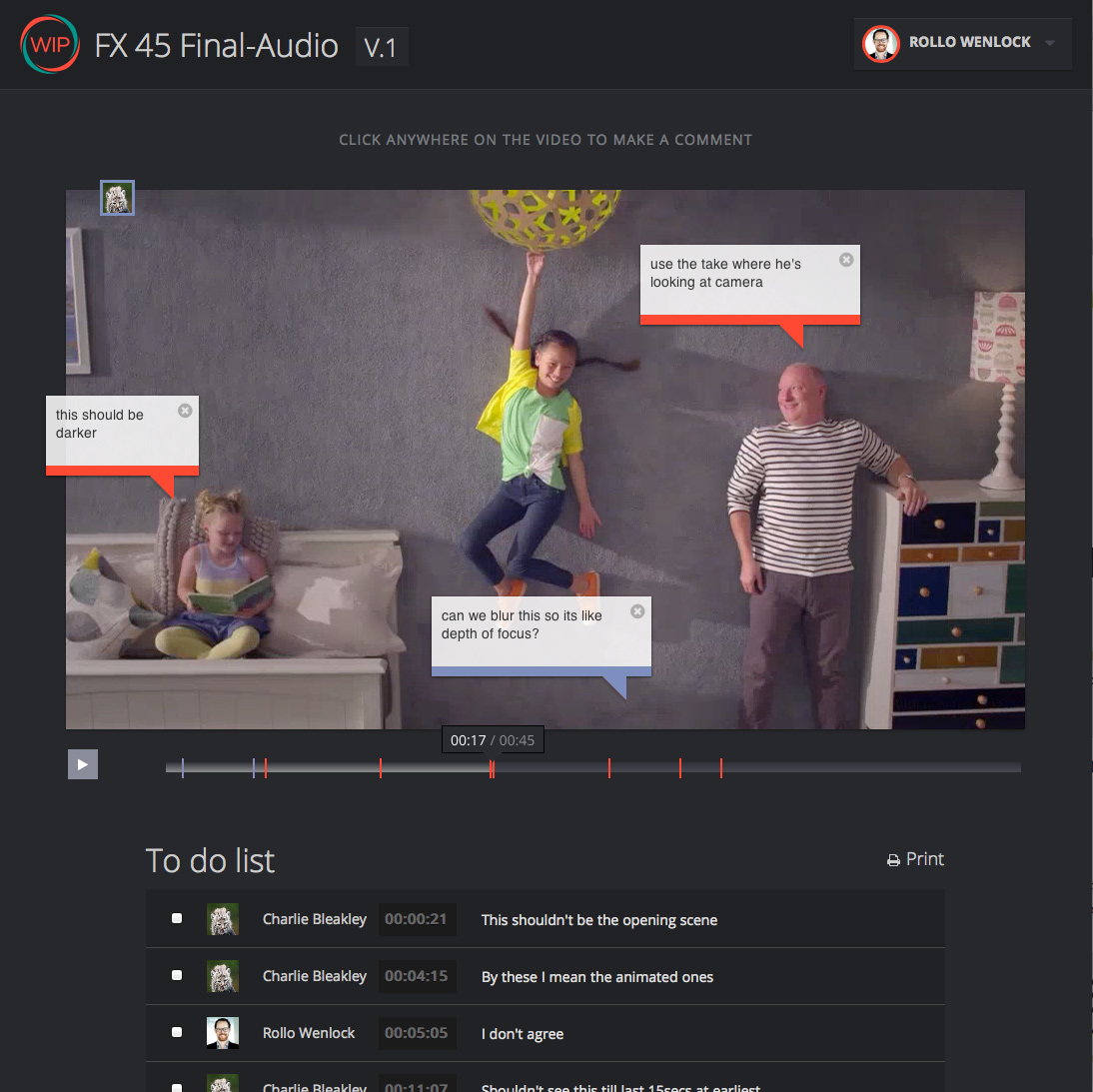 WIP is one of nine startups taking part in the first class of Lightning Lab, New Zealand's first accelerator, which is modeled after TechStars. The class is now 10 weeks into a 12-week program, which culminates in a demo day in Wellington on May 15. WIP got $20,000 thanks to its participation in Lightning Lab, as well as intensive mentorship and free office space, and it also won a $10,000 cash prize for placing first in the Startup Alley competition at Wellington's recent Webstock conference. But clearly, that money won't stretch far.

The startup plans to raise between $500,000 and $1 million over the coming months to help it get through its first year. For the time being, it plans to remain in New Zealand, but Wenlock says the marketing team may well one day be based in the US.

WIP will face a torrid time trying to make its mark on the video-editing market. Collaborative video editing and creation tools are already abundant, such as those offered by First Cut Pro, WeVideo, and Cage, all of which are well-funded global competitors. Wenlock feels that WIP's edge comes in user experience, which he says is very simple and flexible. The company takes a "do more with less" approach to UX design. Wenlock also brings to the company years of experience in producing, directing, and editing commercial videos and films for international clients. CTO Green has a background in video-on-demand.

One of the other challenges WIP will face will be building a large presence in the US from a faraway land and with only moderate venture backing. While it plans to invest in social marketing and trade shows around the world, WIP might find that its money quickly evaporates while deeper-pocketed competitors grab attention and users. As Green proved by building the platform so quickly, too, it might be the case that determined fast-followers or larger companies could quickly build a similar product without too much difficulty. With that in mind, WIP stresses usability and design.

"It's all about visual," says Wenlock. "It has to look good and feel good."

Coming soon on the startup's product development road map is a native iPad app that Wenlock says will be the best way to experience WIP. In the meantime, it is prepping for demo day and getting ready to enter the world outside of the accelerator. Soon it will sign up its first paying customers. That's when the real test will begin.