Eighteen months ago, Richard Bartlett was camped out with a group of demonstrators in a public square in Wellington, New Zealand's capital city, as part of the "Occupy" movement that swept the globe. Bartlett, an engineer turned artist turned activist, was engrossed in what he says was his first experience of genuine democracy. Like their peers at Occupy Wall Street, and at other Occupy camps around the world, the Wellington demonstrators would make group decisions through an inclusive process in which anyone who wanted a say got one. The group would then vote on which proposals to adopt.

Bartlett loved the model – indeed, it would come to form the basis of Loomio, a Web app that facilitates collaborative decision-making – but the process had a dark side. For a start, the people with the loudest voices and the most confident speakers eventually came to dominate the discussion; even simple decisions could become long, drawn out, highly argumentative ordeals. Meanwhile, as the camp ran its course and people started to leave, the only people left were the hardcore occupiers and the homeless people who had come in search of social support and meals. It got to a point where the group discussion was lopsided in favor of male, white voices, and not particularly inclusive after all. Occupy eventually ended its presence in the square, and people moved on.

However, Bartlett and two friends, Ben Knight and Jon Lemmon, didn't want to give up on the idea of spreading Occupy's brand of participatory democracy to wider society. Even as the Occupy camp disbanded, they wanted to push its goals into a new phase. The obvious forum for that, Bartlett says, was to go online. The three friends took the idea for Loomio to a Wellington incubator called Enspiral, which focuses on social enterprise. They were hoping Enspiral might be able to build them the app, which they could then give away for free to other Occupy groups in order to take the pain out of group decision-making while also opening it up to more voices. Instead, Enspiral told the guys they should develop the app themselves, and gave them the workspace and the connections they needed to get started.

So off they went. Bartlett, Knight, and Lemmon set up Loomio as a co-op, enlisting nine committed members and drawing on the services of more than 20 developers and a handful of interns. They also decided to make the project open source. The result is a piece of software that's like a cross between Yammer, Quora, and SurveyMonkey that, in the words of Loomio's mission statement, "empowers everyone to participate in decisions that affect them." 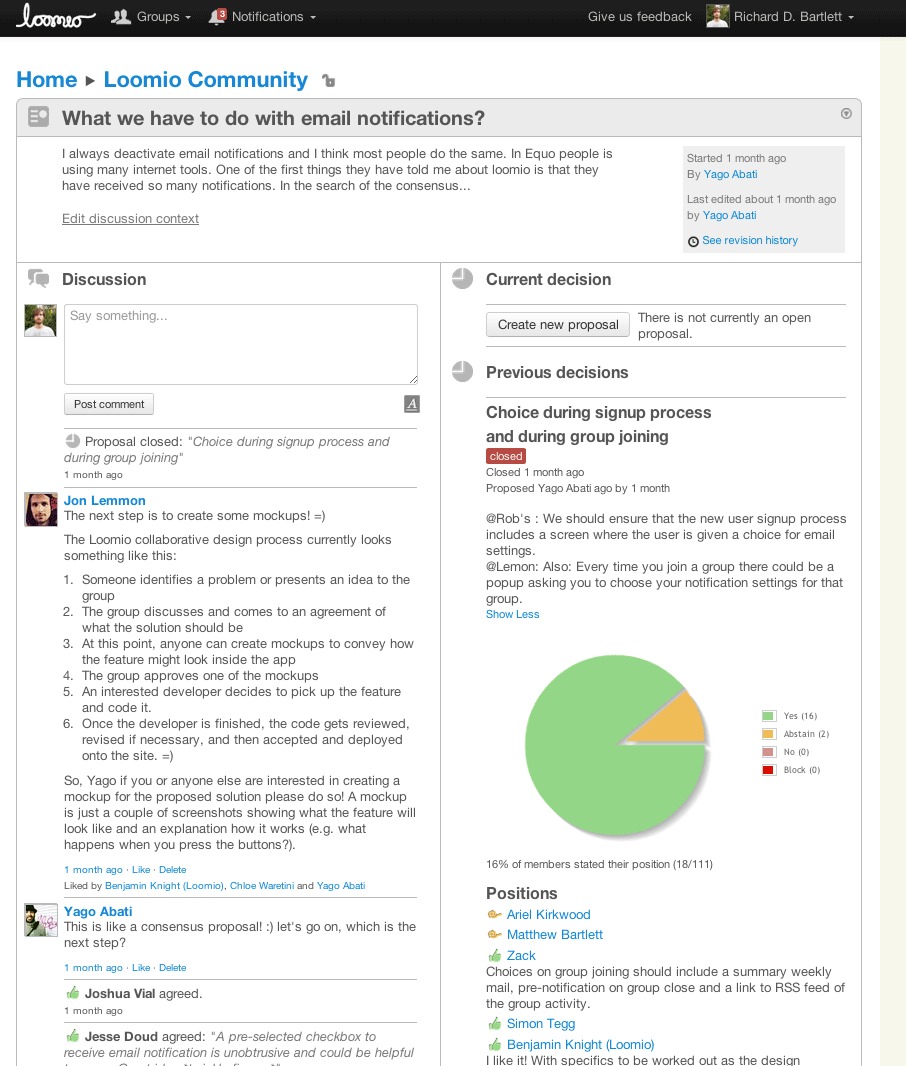 The app is a straightforward concept. Users sign up, join groups, and post and respond to questions that affect those groups. The ensuing discussions can be kept private or made public. For instance, in its own group, Loomio has posted a question about what to do about email notifications for its users. In the left-hand column under the question, Loomio's team members weigh in with their comments in a threaded discussion, while on the right-hand side a pie-graph shows how many people support each option – voting yes, no, abstain, or block – and lists the names of who voted and their choices.

Loomio has had encouraging early traction, picking up a diverse range of organizations as users in its invitation-only beta, including the Wellington City Council, which is using the app for public consultation, Diaspora, the open-source alternative to Facebook, and a host of Internet-based political parties in France, India, Denmark, and Ireland, to name a few. The app has about 5,000 beta users and more than 700 groups, which have collectively made more than 2,300 decisions thanks to the software. It also counts some corporations on its books, which is perhaps a surprising step for a group that was once stridently anti-corporation. "So much of what we're doing is actually educating people about the culture of good decision-making," says Bartlett.

Bartlett himself, who wears a scraggly beard and second-hand shirts of the type worn by lumberjacks, embodies a softening of the group's approach to business. "In my early days of being an activist, I would have been like, 'Fuck the CEO!'" he says. "But that doesn't work."

He now thinks being "anti-business" is an unenlightened view. "I don't think it's constructive to think in those terms." It's important to acknowledge that the market, alongside government and social movements, is one of the key forces that shape society. "To write one off as bad is really ignorant," says Bartlett. "It's just a knee-jerk reaction." He still thinks that businesses can do harm, but that there is nothing wrong with the mechanisms of business in their own right – it's just that they can be sometimes be applied with nefarious intent.

Still, the co-op is striving to hold onto its ideals and apply a radical model to its own particular business. The way it makes money is not especially unusual – it charges organizations a Yammer-style per-user subscription and asks for a pay-what-you-can contribution from those who can't afford more – but it is resolute in not raising venture capital. Loomio won't accept any investment if it means giving up control of any part of the co-op, Bartlett says. Instead, it is trying to raise a single round of about US$150,000 from friends and family, and beyond that it hopes to support itself on its own revenues, which are already starting to flow in.

Because it is an open-source project, Loomio benefits from the volunteer efforts of about 30 community contributors, but it also pays five and a half staff members minimum wage, which in New Zealand is about US$12.70 an hour. It is also relying on programmers to invest their time and energy in the project with no immediate promise of a salary, or at least one that it is even remotely competitive with market rates. However, the co-op does intend to become profitable, and if it does so it will divide the surplus among other social-good organizations and its own workers. Bartlett appears to be fine with the idea that Loomio's co-op members might get rich from the venture, but he phrases it differently, saying the co-op wants its members to be able to "be generous" in their ability to give to others. "We're not scared to pay people what they're worth."

Rather than traditional contracts, the co-op's members sign agreements that state they will achieve a certain task within a given timeframe. For instance, a programmer might sign a promise saying he'll make sure the feature-development process is as collaborative as possible and kept in line with the organization's aims. The members are each assigned an "accountability steward" from within the organization to make sure the job gets done. The aim is to avoid having bosses and a hierarchical structure.

To say that Loomio will face challenges as it grows is an understatement. Its refusal to take venture investment will put immediate pressure on the co-op to drive up revenues early in its life, which could have short-term benefit for the company but could potentially corrupt the founders' original motivations. If it continues to operate on a shoe-string budget, too, Loomio opens itself up to being supplanted by a deeper-pocketed startup or corporation that could easily copy, and perhaps improve on, the product.

Loomio's lack of resources is reflected in the relatively slow pace of the app's development. It is not optimized for the mobile Web, it has no mobile apps, and it has slow page-load times. Even though development on the product started more than a year ago, it still hasn't emerged from private beta. At the moment, the system works well for groups of up to about 300 people, but beyond that it tends to get "noisy," affecting both usability and utility, which will be a difficult problem to solve as Loomio attempts to scale as it attempts to reach a truly widespread global user-base, as Bartlett says it hopes to do.

And then, of course, there's the huge question mark over the co-op's non-hierarchical structure, a model that still feels very much an experiment. If Loomio can make it work, it'll be a coup, but it will almost certainly face growing pains and potentially life-threatening organizational crises as the business becomes more complex.

Still, to Bartlett, the mission of spreading participatory democracy – "to empower everyone to participate in decisions that affect them" – is was ultimately matters the most. If that happens without Loomio, he says, then so be it.

One gets the feeling that his fellow co-op members would give that sentiment the thumbs up.