Study: Daily deals sites are bleeding each other dry

But how did companies like Groupon, at one point called the "fastest growing company ever," become the punchlines they are today? Observers cite poor management, faded novelty, and bad value propositions for merchants. Those are three really good reasons, and here's another one: Daily deals customers just aren't very loyal. 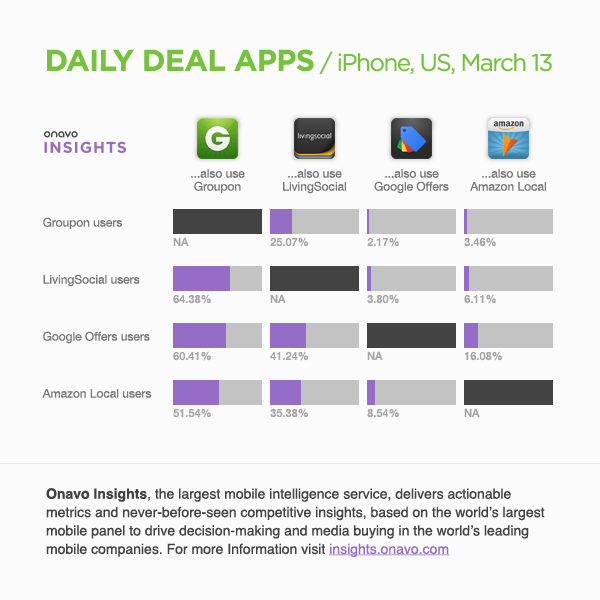 Overlap between competitors isn't always bad. Plenty of people use both Twitter and Facebook. But as Facebook CFO David Ebersman pointed out in this week's earnings call, social networking isn't a zero-sum game, and the number of people using these services is growing. The daily deals market on the other hand is shrinking, and Groupon and LivingSocial are only bleeding each other dry.

So who benefits from this backstabbing? Potentially startups like TikTakTo, an aggregator of daily deals that PandoDaily covered last week. Because daily deals customers don't seem to care about branding, the sector is ripe for a company like TikTakTo that merely provides a good user experience for finding the best deals, regardless of which company facilitates it. Like with Uber, I don't care whether the car's a Crown Victoria or a Lincoln Town Car, as long as it's easy to hail and gets me where I need to go.

Of course that's assuming the daily deals customer base doesn't continue to shrink beyond the point of viability, which is hardly outside the realm of possibility.