Groupon is a hungry shark. And that's not necessarily a good thing.

In the world of e-commerce, Groupon is a shark: It must constantly move forward to survive.

The company started out as a business offering local daily deals through email. It was briefly one of the fastest growing companies on record, but as the daily-deal market soured Groupon moved away from email and daily deals. Last quarter, less than half of the company's North American transactions came from emails, and more than half weren't daily deals but longer-term deals in Groupon's searchable Deal Bank.

Similarly, when its business of offering deals with third-party merchants began to slow, Groupon moved into direct sales, which now account for 27 percent of its revenue. When consumers grew comfortable buying on the mobile Web, Groupon followed them. It now sees 45 percent of its transactions from mobile devices. When competitors emerged, Groupon began offering a complex software platform aimed at helping merchants engage with new customers.

By some measures, this strategy is working well enough for the company for now. The company reported revenue of $601 million, up 8 percent from the same quarter a year ago. Analysts, mindful of the disastrous results only one quarter ago (which prompted the firing of its founding CEO), had set the bar low with forecasts of $591 million.

Groupon's stock shot up 11 percent on those numbers, which might appear to be a triumph for the hedge funds that have been buying the stock. On the other hand, the rally puts Groupon's stock back where it was only a week ago. And some of the buying may be spurred by bearish investors buying back short positions on a report that, as one analyst bluntly put it, “wasn't a debacle.”

Groupon isn't out of the woods, however. The company needs a new permanent CEO and Ted Leonsis, one of the two people handling the job now, said the company isn't in a hurry to find one. What the company is in a rush to do is to scale up its aggressive company vision.

When Groupon filed to go public it's vision was a comparatively modest one: “bringing the brick and mortar world of local commerce onto the Internet.” The company's prospectus talked about reshaping local commerce. Today, Groupon prefaced its earnings-call presentation with this mission: “To be the world's commerce operating system.” In the way Facebook wants to connect the world and Google wants to organize all its information, Groupon wants to be Windows for its commerce.

This is pure Groupon. When the going gets tough, make the goal that much more audacious. Much like prolonging a CEO search, it lets you go to investors and ask for more time to turn things around. In the earnings call today, chief operating officer Kal Raman said, “It's not even day one, it's hour one of day one in revolutionizing global commerce.” Eric Lefkofsky, the other CEO in Groupon's two-man horse costume, talked about Groupon's “growing pains.” Together, the two quotes conjure an image of Groupon as a teething infant.

Groupon's pains have always come from its hypergrowth, its relentless drive to always be moving somewhere new. The company's push into international markets continues to weigh on its financials: 56 percent of Groupon's active customers are in international markets, but the segment's revenue fell 18 percent. Spending per customer has held steady in North America over the past year, but it's fallen 35 percent abroad.

Similarly, Groupon's expansion into Goods, its direct sales business, has kept revenue growing 42 percent in North America, but it's crushing profit margins. Operating profit fell to $21 million from $40 million over the past year, while operating margins were halved to 3.5 percent from 7 percent.

Groupon's invest-today-for-growth-tomorrow strategy has its costs, and the toll it's taking on the company can be most clearly seen in its free cash flow. Free cash flow shows how much cash the core business is generating beyond the spending needed to keep growing. 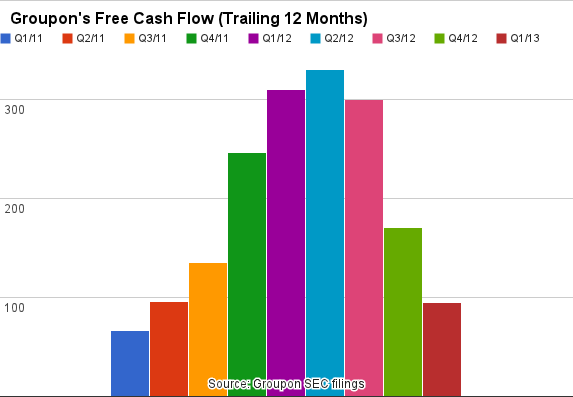 Measured over the trailing 12 months, Groupon's free cash flow last quarter fell to $95 million. A year ago, it stood at $310 million. It's fallen every quarter for the past three quarters as expansions into goods, new software platforms and new international markets have demanded more spending.

Groupon may have posted a decent quarter, its strongest in a while. But make no mistake, the more this shark moves forward, the more it looks emaciated.