Video games, role-playing, and Rube Goldberg machines: Is this the future of education?

If anyone tells you they're satisfied with the education situation in the United States, they're either lying or part of the problem. Despite federal initiatives to promote STEM education, US students still lag behind many countries in math and science. Meanwhile, the US spends as much per student as any country in the world, according to the Organisation for Economic Co-operation and Development. And yet the past three decades of education reform, which have laid the burden of success on standardized test scores, have yielded negligible results.

With government-led reforms bringing about little progress, does the task of reinventing the classroom fall on startups? Nine months ago, the LA-based non-profit Gamedesk launched the Playmaker school, a progressive middle-school curriculum based on various types of digital and live-action play. Over the past schoolyear, Playmaker has taken over the sixth grade class at New Roads, a private K-12 school that serves children from both at-risk and affluent communities. And last Saturday, Gamedesk officially unveiled its classrooms at a ribbon-cutting party in Santa Monica, replete with a DJ, Jenga, and a giant interactive skee-ball game built by Two Bit Circus: 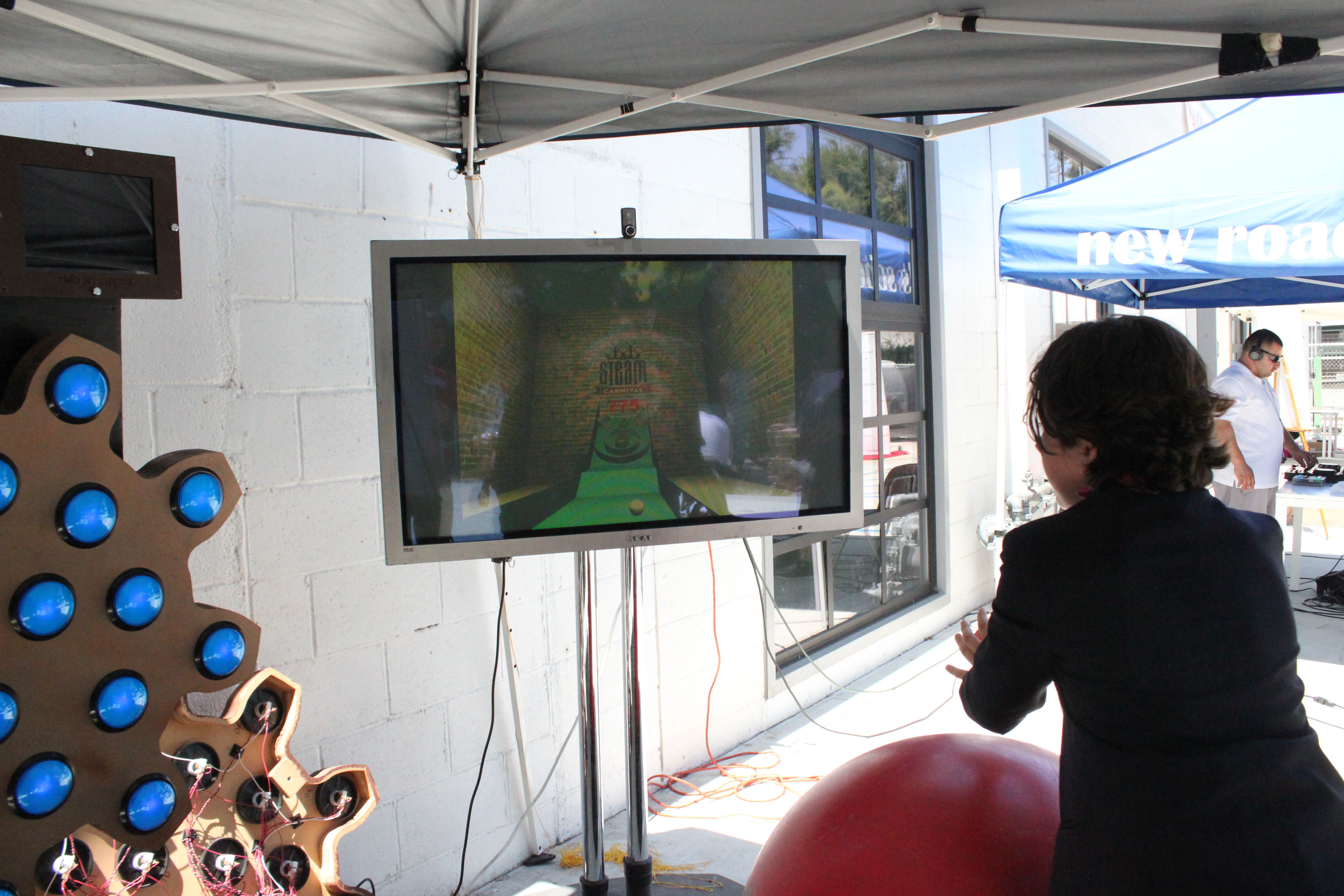 Not that what's been going on at Gamedesk over the past nine months has been a mystery, exactly. The company has shot a ton of video of its teachers and students at work (including exclusive footage given to PandoDaily for our feature story last month). But this is the first time the public has been allowed to walk through the venue and watch the students learn and play in person.

The big takeaway? Games are great, but equally important are low-tech and no-tech approaches, as you'll see in the architecture of the learning spaces.

During the ceremony, participants were guided through three rooms:

The ideation space, a giant egg-shaped room where kids can write or draw anything they like on the walls: 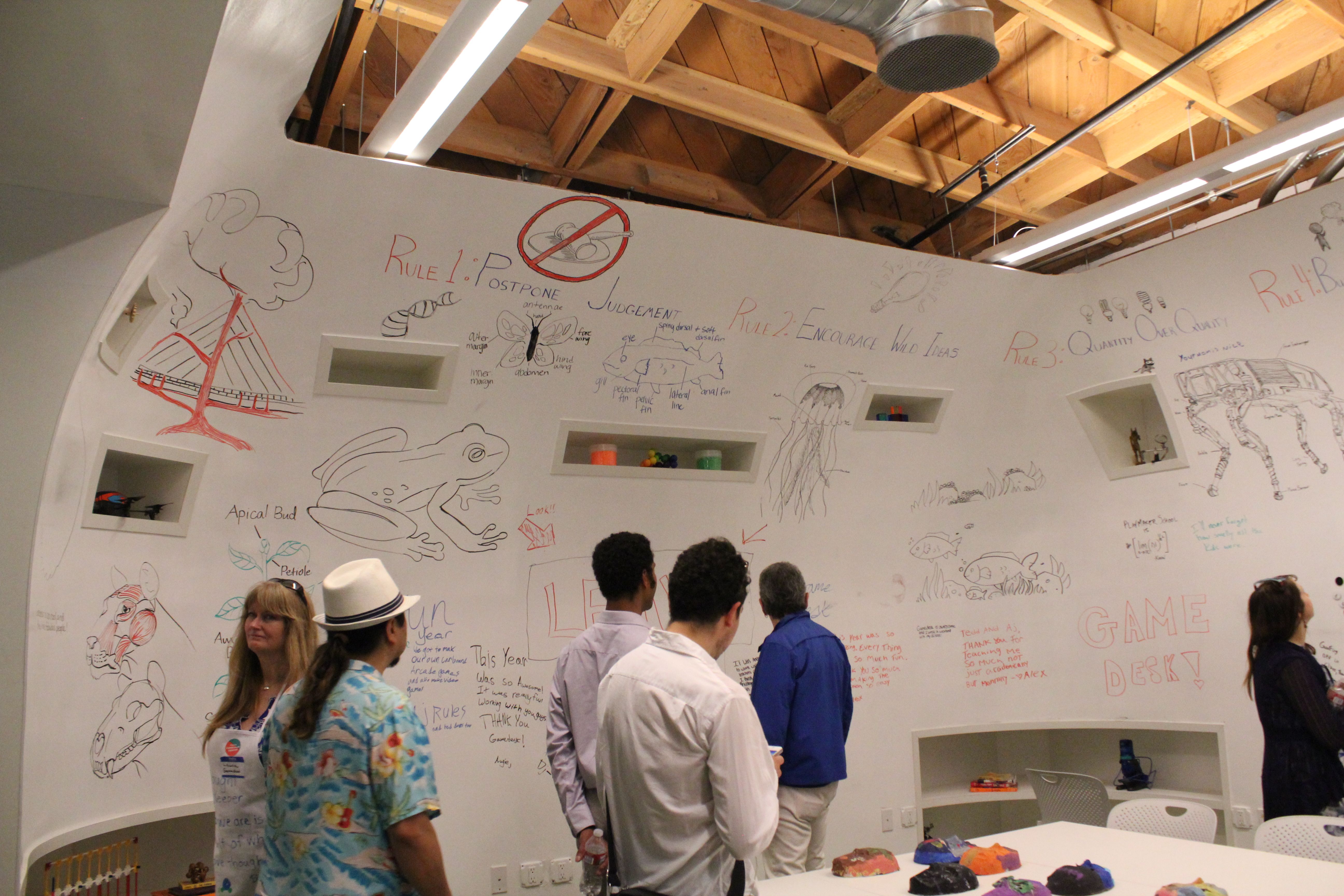 The interactive space, where the creative video games Gamedesk is known for take center stage:

And the maker space, where the students are trying to build an elaborate Rube Goldberg machine, like a miniature version of the exhilarating apparatus from that OK Go video.

"Some of the parents were really concerned about the video games mindset toward learning," said the program's Associate Director Joe Wise. And indeed Gamedesk has a reputation as being the "video-games-as-education" startup, thanks to the technological "wow" factor of some of the games its developed, like the motion-sensing teaching tool AERO.

But as Gamedesk's CEO Lucien Vattel emphasized when I spoke with him last month, some of the most rewarding and enriching lessons involve no tech whatsoever. In the maker space, for example, the students are surrounded by hammers, saws, and PVC piping, which might come as a shock to curmudgeony types who knock younger generations for relying too much on technology. It puts your average high-school shop class to shame.

But the year wasn't always without friction. During one of the roleplaying lessons where the students acted out the conflicts of early civilizations, they were faced with a scarcity of resources, causing some of the kids to consider going to war over territory. Parents were not impressed. Here they thought their kids were attending a progressive school, and now the poor innocent babes were turning into little imperialists. "The phones were off-the-hook," Wise said. But in the end, the roleplaying activity made the children realize that trade was a far more mutually beneficial solution than war. "I told the parents, 'Your kids chose not to go to war. They chose commerce instead.' You don't get that from a book."

The approach of letting children figure things out on their own appealed greatly to Jenn and Glenn Gers, whose son Harry attended the school. "For Harry it's not about being told and taught stuff, but having it brought out of him and being taught to use his own mind," said Jenn. But don't all schools teach kids to use their own mind, at least in theory? Here's a good example of what she means: Instead of having students memorize the names and frequencies of different waves, the teacher will draw each wave on the board and ask students to identify and categorize the differences between them.

Along with encouraging students to break down concepts at a more fundamental level, this technique minimizes the kind of rote or recitation that can instantly cause a child to tune out. It's even a little sneaky at times. Glenn Gers told me, "Harry came home one day and said, 'We were playing this game and at the end we realized we were learning algebra.'"

Not everyone is convinced that what Gamedesk is doing could or even should become a model for schools across the country. Last month, when I talked to Steven Hodas, Executive Director of the New York City Department of Education’s Innovate NYC Schools program, he said part of why the Gamedesk model works is that it was built from the ground up on a foundation that encouraged creativity and experimentation. It also benefits from being a part of the New Roads School which is fairly progressive to be begin with, plus it's impossible to ignore the millions of dollars given to Gamedesk by the Bill Gates Foundation and AT&T.

In many public schools, however, bureaucratic pressures can easily stamp out innovation. And with so many children on the razor's edge, it's not always responsible to bring bold, untested experiments into the classroom. In tech, they say fail fast and often. Tell that to a kid who is one failing grade away from dropping out of school.

Regardless of whether it scales to the rest of the nation, for parents like Jenn Gers, Playmaker has been a dream come true.

"We feel incredibly lucky," she said.

[Photos and Videos by David Holmes]