Skift's approach to building a new media company: It's as much about data as it is about news

Despite the many miserable prognoses for the future of the media business, a few stubborn entrepreneurs still see fit to venture into content-driven companies. Such people – including PandoDaily’s own Sarah Lacy, Business Insider’s Henry Blodget, and BuzzFeed’s Jonah Peretti – are buoyed by the belief that digital news organizations can ultimately become global and wildly profitable, albeit with different business models than the ones that got us through the last couple of centuries.

Among the crop of new players in media is Skift, a 10-month-old travel publication that merges content with data services while targeting a crossover audience of business readers and consumers. Skift, which is already among the top three or four online travel industry trade publications in a space that has lagged behind the times, today announced that it has raised an additional $1.1 million in seed funding, adding Advancit Capital, Ironfire Angel, Mesa+ and others to an investment roster headed up by New York’s Lerer Ventures. (Disclosure: Lerer Ventures is also an investor in PandoDaily.) The round brings Skift’s total funding to $1.5 million.

Skift was brought into the world by Rafat Ali, who founded paidContent in 2002 as one of the first blog media companies. He later sold paidContent to Guardian Media, which subsequently sold the blog to GigaOm in 2012. After a couple years’ respite since selling paidContent, Ali saw an opportunity in travel, the world’s biggest industry, noticing that the publications that covered the industry had not been subjected to the same waves of disruption that, say, the tech and finance media had. Social and mobile, for instance, were still largely foreign concepts among travel industry publications, which include TTG, Travel Weekly, and Business Traveller, all of which are freighted with legacy baggage from their print magazine backgrounds.

Ali launched Skift in July last year as a visually-driven news site with strong social elements, an emphasis on data, and an editorial team of just three people. The entire staff totals five. With the new funding, Ali intends to double that number, adding two more developers, a social media head, another editorial staffer, and the company’s first sales person.

Not only is Ali confident that Skift has a future, but he also believes that it can become a big company. He says one of the traps he fell into with paidContent is that it was restricted by its format. Even though the company expanded to events, its content and products couldn’t really extend beyond the blog post, and only within the narrow vertical of its media industry coverage. “One of problems of B2B media is they get trapped in verticals, where there’s only incremental growth,” says Ali. 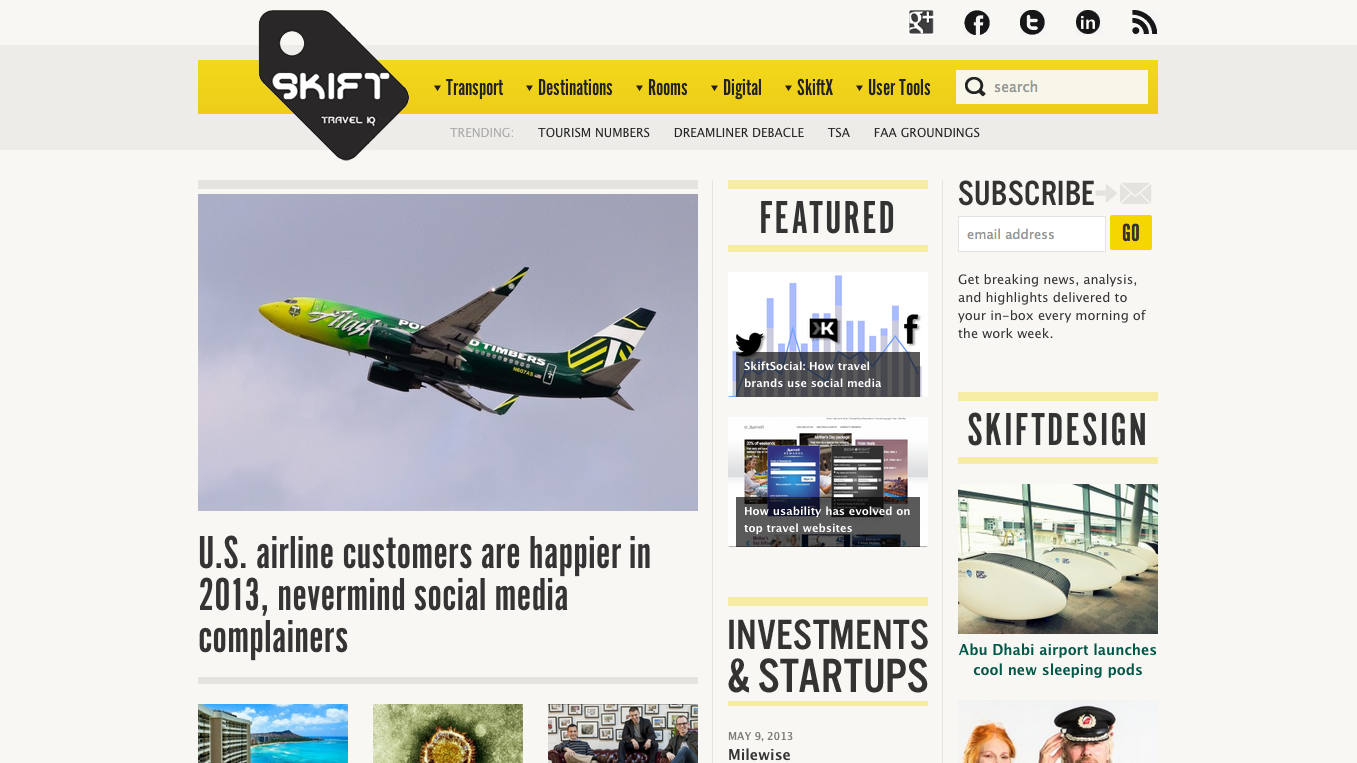 With Skift, then, Ali has consciously developed a model that won’t rely on its news and attendant display advertising to make money. Instead, Skift is incorporating a data dashboard into its suite of products. The dashboard will provide a mix of intelligence, such as operational and financial metrics, to subscribers in a mobile and web-friendly format. “The whole idea is essentially to build a competitive intelligence engine,” says Ali. “News information is one part of that flow.”

The design of the Skift website reflects the move away from the blog format that characterized paidContent, instead prioritizing images and flashes of data packages. Ali’s intent is very clear: Skift is not a blog. “Anyone who calls us a travel blog I will literally go and punch them in the face,” he quips.

Skift has given users a taste of what data dashboards might look like with the launch of SkiftSocial, which provides leaderboards, comparisons, and charts that analyze the social media performance of various travel businesses by category. SkiftSocial is free, but similar products in the future will be subscription-based, costing anywhere between $500 and $1,000 per seat per year.

Over time, Ali also plans to build out specific verticals within the site – such as Ads, Business, and Design – so they become products in their own rights that are attractive to advertisers and sponsors. Such ads won’t take the form of banners or boxes, however. More likely is that they will be “native” ads featuring content produced by brands, with an emphasis on high-quality images and video. Because many travel brands are already producing such content, Ali sees Skift as fulfilling a distribution role. The company is also exploring VIP partnerships, custom print magazines that could be produced on a quarterly basis, and syndication opportunities. Skift already has licensing and distribution partnerships with CNNTravel.com, NBCNews.com, LinkedIn, Advertising Age, Quartz, and Flipboard. Such syndication efforts may one day morph into a point when Skift becomes a de facto wire service for travel industry news.

Ali is taking several big bets with Skift, and it’s unclear how they’re going to pan out. He is determined, for instance, to keep the editorial staff at a minimum while trying to produce between 30 and 40 pieces of content a day. That’s a big ask for a small team and may ultimately be unsustainable, even though two thirds of it is either curated or licensed. Adding a wire service-type approach may make the lean editorial team even less feasible. In the meantime, Skift is just as much an aggregator as it is a content producer.

However, Ali sees a small team and low overheads as key to the company’s profitability plans. He scoffs at other media startups that are burdened with tens of millions of dollars of venture capital and have editorial teams of more than 100 people. “That’s just crazy,” he offers. “How do you sustain the cost?” The hope of such companies, he guesses, is that a larger media company will buy them based on headcount. “Somebody I’m sure will overpay, but that’s just hoping for luck. We don’t necessarily want to be in that game.”

So don’t expect Skift to go raising much more money in the near future. Ali says it’s enough to expand the team for now and start building in sales. All going well, he expects Skift to be profitable by the end of next year.

That might sound optimistic, but for a media startup in these times a sunny disposition can't hurt.