With Thirst's Droplet, the vision for news on Google Glass becomes a little clearer

One of the big questions about Google Glass is how it will affect the way we consume information (if, that is, it gains popularity and acceptance in mainstream culture). In particular, many people are interested in how Glass will affect news consumption. We've already seen how the New York Times works on the new medium, and Mashable has just launched an app for Glass that alerts users to when its stories are going viral. Today, we can add another media business to the list.

News reader startup Thirst Labs has released Droplet, a way to get alerts to stories on topics you care about. The app uses the same natural language processing backend as Thirst, which picks up the stories that appear to be the most important according to your favorite topics and delivers them to your iPhone or iPad.

In the case of Glass, Thirst shows you a "card" that displays a headline overlaid on an image. You can then use voice or touch commands to have the first paragraph of the story read out to you, or you can email it to yourself to read later. The app also lets you "Like" or "Dislike" a story, and that information is then shared with your network on Thirst. On the Thirst website, meanwhile, you can specify which topics you're interested in and adjust the settings for how frequently you'd like to receive the news updates.

Thirst co-founder and CEO Anuj Verma says the app, which took just 72 hours to build, is based on the principle that Glass is the sort of device that is "always on" for users, and so it changes the news discovery mechanism from one of active seeking to one of passive delivery. 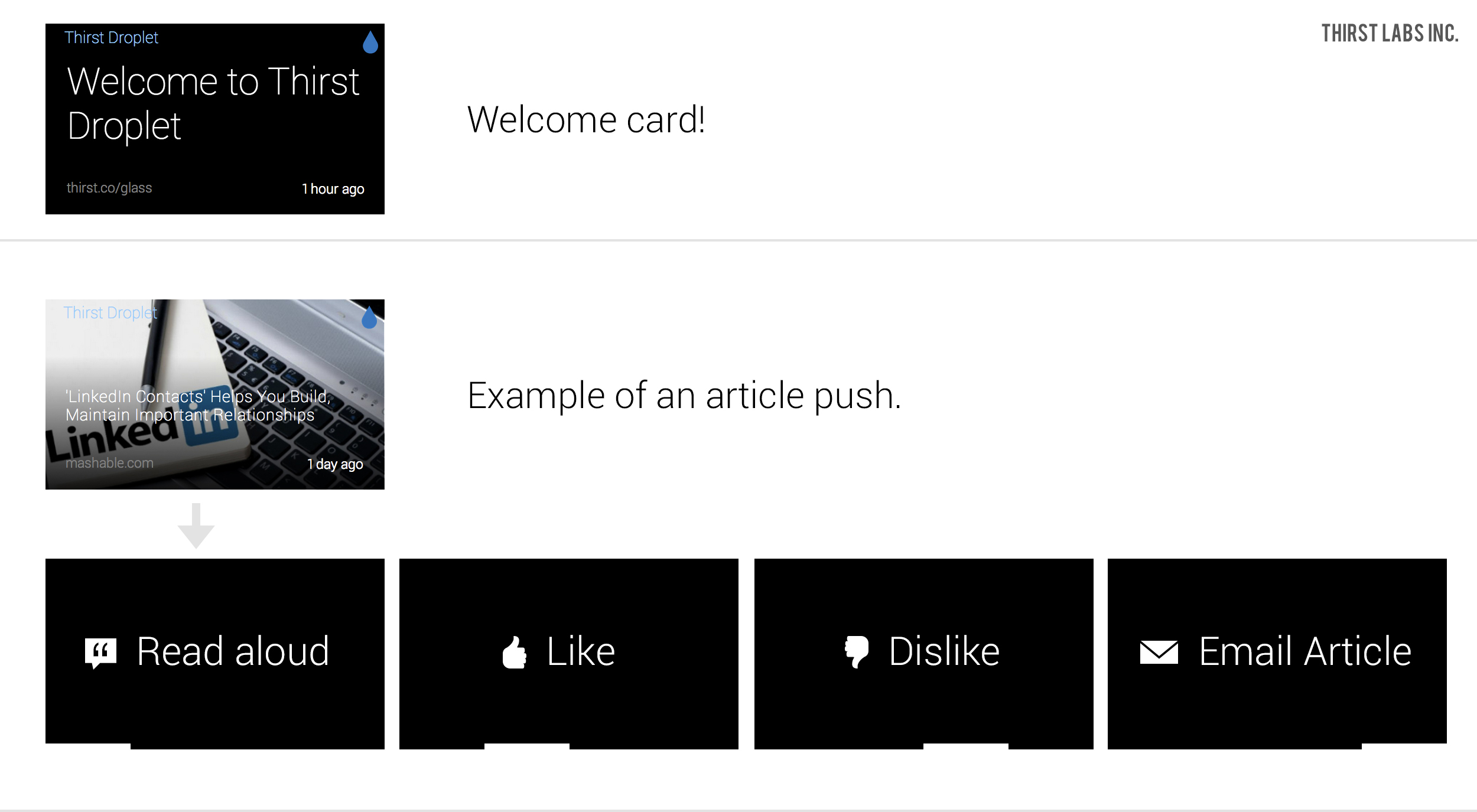 “It’s more of a push-based platform," says Verma of Glass. "There’s no real way to browse around. When you look at a bunch of apps and you look at mobile, a lot of the focus is on discovery... I don’t think that’s going to be the case when you look on Glass."

Verma says Thirst is moving quickly into Glass because it thinks the first-mover advantage could potentially be huge. Its competitors, including Flipboard and Pulse, would have to radically adapt their content models in order to adjust to Glass's push-based environment.

Verma believes that Thirst works well with a push-based system because its model is based on following stories that trend within specific topics rather than catching all stories from certain publications, curators, or verticals. However, Thirst will no doubt soon find it is one of many on Glass, just as it is but one player among a swarm of news reader apps designed for the iPad, with News360, Prismatic, and Zite among the many in the space.

Another important thing to watch will be how Thirst and its competitors deal with the potentially large problem of notification-overload on Glass. Given the limited real estate and the notification-based process for Glass, pretty much every app imaginable will be trying to grab user attention with alerts. That could quickly get ugly. Verma doesn't have a sexy answer for how Thirst might deal with that problem, other than to say it will develop a solution after looking at the data. In the future, however, it plans to let users set limits and alert rates on a topic-by-topic basis, probably on a sliding scale.

That is, of course, assuming Google Glass has a future that lasts that long.