There's something magical about a child's imagination. Kids are able to see a stick and create a sword, hide within a blanket fort and take refuge in a castle, or drink tea with impossibly-shaped (and colored) animals and mythical creatures. Life is just a little bit more magical when you're 3-foot-nothing and your greatest worry is whether or not "Thomas the Tank Engine" is on. But, as with all things, imagination fades.

Pixel Press won't be able to fully replicate childhood fantasies, but it might just make it easier for you to express your neglected imagination.The application, which is currently seeking $100,000 on Kickstarter, allows you to draw on custom-designed paper and, with the aid of an iOS or Android device, transform that drawing into a playable videogame. It isn't quite the same as being able to imagine a tale of derring-do or exploring the ancient wonders of your backyard, but damned if it isn't the closest many of us will come to turning our imaginations into a (virtual) reality.

Pixel Press' promise is simple: It will allow you to draw videogame levels and, using the same optical character recognition (OCR) technologies that services and products like Evernote or the Doxie Go paper-scanner use to recognize handwriting. It takes a videogame level and breaks it down into a series of symbols, the same way musicians abstract musical notes with their own specific notation. 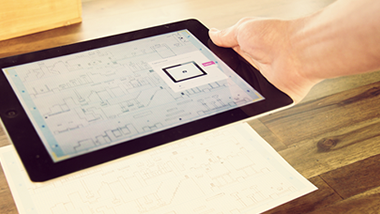 "The impetus [of Pixel Press] was really in the drawing piece," says Robin Rath, the application's creator. "I have this huge nostalgic association with how I took a piece of paper, divided it into five levels, and drew it. That's what the idea has been since I was six." He didn't just want to play videogames -- like so many of us, he dreamt of creating and playing his own. Pixel Press is, in some ways, the belated realization of a 6-year-old's imagination.

Rath says that he plans on exploring other uses of Pixel Press' underlying technology to build educational tools for children, but, at least for now, the focus is on building a platform that will allow you to share your creations with the wider Pixel Press community. (Insert fuddy-duddy rant about everything being created in this era having to include something "social" here.) Some would call this an evolution of multiplayer gaming; I'd call it a distributed imagination platform. 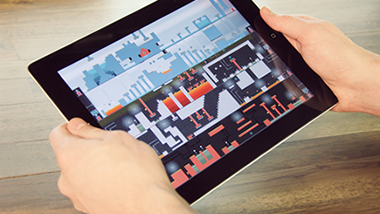 Pixel Press is probably the most useless, most exciting tool to bridge the physical and digital worlds I've seen yet. This isn't going to change the way you interact with the world around you, or save you money, or help everyday objects communicate with you or each other. But it is going to allow you to draw your own videogame levels with nothing but a printer, a piece of paper, a pencil, and the help of an iOS or Android device.

Now, I have something to confess: I can't draw worth shit. Before I put pencil to paper I'm able to imagine the wildest, most surreal illustrations this side of MC Escher on an acid trip. As soon as lead meets dead-tree-pulp, however, I'm left with nothing but a squiggly line and a reminder of why none of my work ever made it to the fridge when I was a kid. One of my drawings coming to life would be worse than witnessing the birth of Frankenstein's monster.

Pixel Press doesn't care about that. Because it uses easy-to-draw symbols on grid-lined paper, the application won't require any profound artistic ability in order to work. All it's going to take is a little bit of imagination -- and maybe a few extra pencils or two.