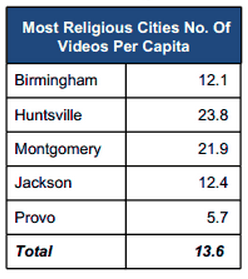 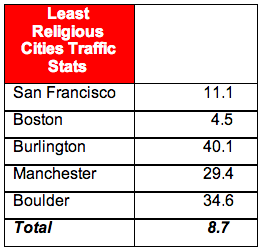 The biggest differences between the two grew directly out of religious observances or beliefs. For example, the very religious folks were far less likely to indulge on Christmas, which makes sense (or maybe it's just harder to sneak away from loved ones on holidays). Preferred genres of porn also came out in the study, with "Gay" being the most common category among non-religious cities and "Teen" being the most common category for the very religious cities. And while "Gay" did not crack the top 5 among the "holy" cities (perhaps not surprising considering fundamentalist attitudes toward homosexuality), "Lesbian" ranked number 5. (Apologies in advance for publishing the word "Squirt" on PandoDaily).

Sounds like your favorite tentacle erotica Tumblr is here to stay.