If you thought it was hard doing a startup in Silicon Valley, try Kathmandu. The capital of Nepal struggles through daily electricity cuts, unreliable Internet, and Maoist protests and strikes that cripple the city’s infrastructure. But, yes, even in Nepal, there is a fledgling startup culture, and just a couple months ago the country hosted its first Startup Weekend.

To an extent, there’s also a bit of cultural isolation in Kathmandu, which is not exactly an integral part of the global tech ecosystem. So, it’s kind of understandable that one of its startups, a photos-to-video animation app called Picovico, wasn’t even aware of its biggest international competitor when it came time launching its own product in beta last year.

Soon after launching Picovico in beta, the founders realized that a very similar video-slideshow product had existed since 2006: Animoto. The San Francisco-based company, backed by $30 million in venture funding, had something of a headstart.

Picovico, started by computer engineering graduates Manish Modi and Suraj Sapkota, freaked out just a little. “We were like, ‘Why will people use our product if they have something which is already popular, which is already good?” community manager Shilpa Singhal recalls.

They realized they had no option other than to try to provide something different. So Modi and Sapkota worked on making the product as fast as possible, and have now got the video-rendering process down to 15 seconds for a 30-second video. Speed is now Picovico’s chief selling point. The app is free while the company focuses on building a user-base. 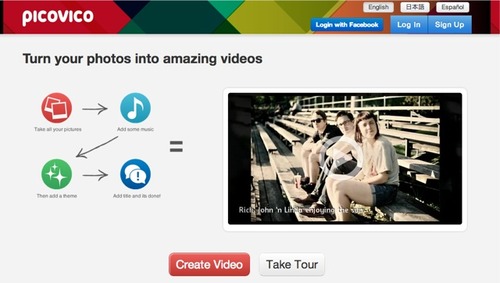 While the six-person company is based in Kathmandu, it is targeting a global audience and has registered as a company in San Francisco. Picovico has so far gone through two accelerators: Bangalore’s The Morpheus and Startup Chile, which it applied to in an effort to get closer to the US market. South America, they decided, was near enough. All the company’s funding has come from those accelerators and numbers in the tens of thousands of dollars.

There’s no sense in underplaying the huge battle Picovico will face in establishing itself with an American market in the shadow of Animoto. The tech behind the app may be solid, but video creation is such a design-driven concern, and, compared to Animoto, on that front the Nepali startup looks decidedly second-class. There may, however, be an opportunity to cater to an Asian market that has different, and sometimes unique, design tastes. Meanwhile, it must also compete with FlixTime, Stupeflix, and ProShow Web, among others.

Even for a startup from a nation of mountain climbers, the incline for Picovico might ultimately be just too steep.