Hey, what's this? An admission that the US can learn from China

Kleiner Perkins Caulfield & Byers partner Mary Meeker presented her annual slideshow at the D11 conference today, and, nestled in among the data-happy goodies, she had a message for the US tech industry: You might actually learn something from China.

That's a message we here at PandoDaily have been pushing for a while, especially with regards to Twitter, which we think could benefit from copying a few things from Sina Weibo. Maybe – just maybe – it could be also the theme of an upcoming ebook written by yours truly. But I guess we'll just have to wait and see about that one.

In the meantime, let's see what Meeker had to say. Seems a reasonable thing to do. Cue the slides. 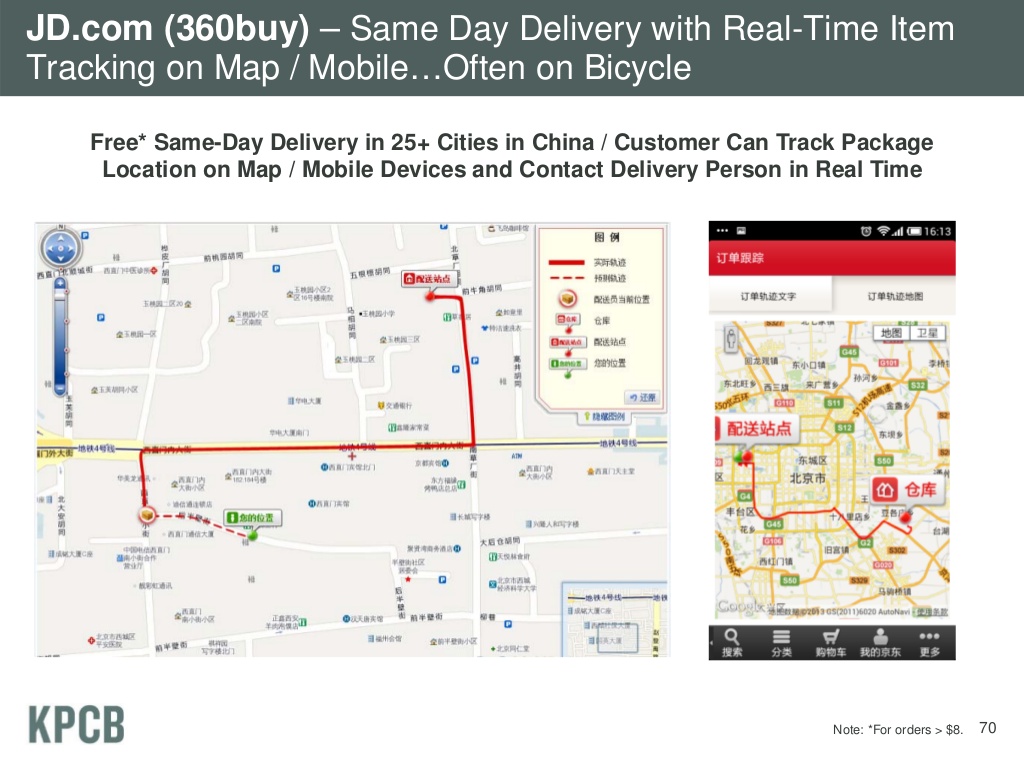 Same-day delivery – the Holy Grail for US ecommerce giants such as Amazon and Google – has been a reality for a while in China. Here, Meeker shows that Jindgong (formerly known as 360buy), the biggest threat to Alibaba's Taobao, achieves that efficiency sometimes by means of bicycle. In China, ecommerce plays a more important role than it does in the US because the country's bricks-and-mortar retail infrastructure is still under-developed, especially outside of the big cities. There's also a lot of competition, forcing online retailers to go to greater lengths to attract customers.

One way these retailers manage to pull off such fast delivery is by employing multiple people who take care of different stages of a journey. In Shanghai, for instance, a man on a motorized scooter might hand off a package to someone who is waiting inside the turnstiles at a subway station. That person will then take the package to the appropriate stop, at which he meets another man with a scooter to whom he can pass off to the package, without having to leave the paid area of the station, for the final mile delivery.

We're not sure how well such a system would work in highway-heavy America, though. 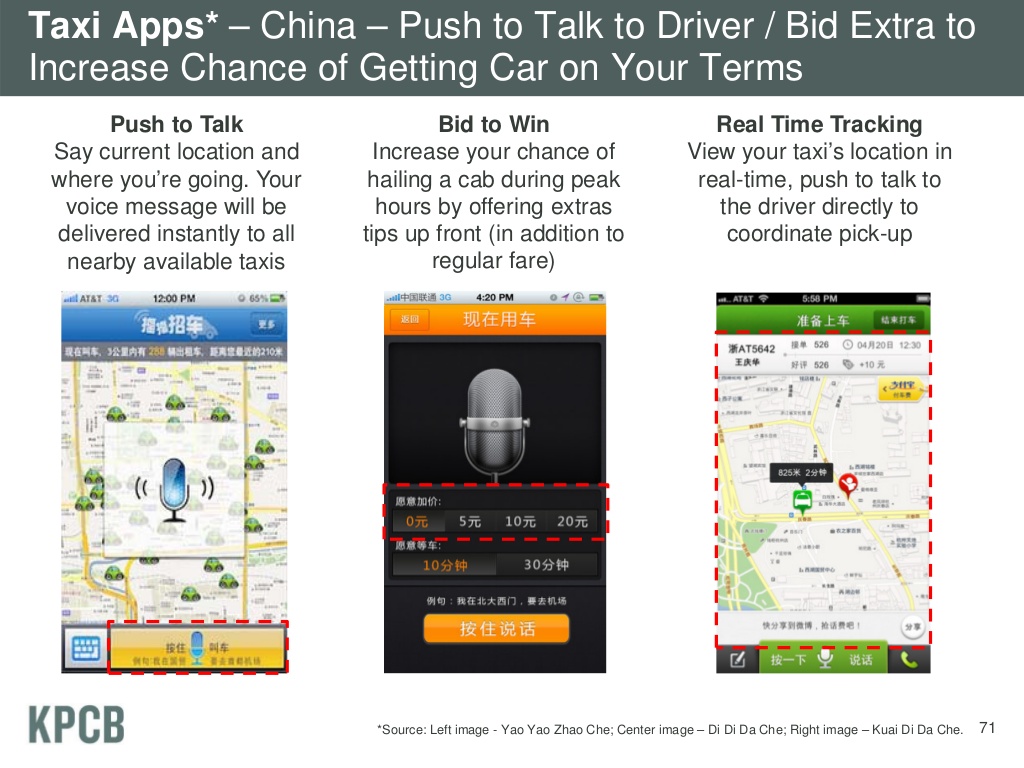 Voice communications in general are more advanced in China than they are in the US, and this execution with taxi-booking services shows just how useful such an approach can be. For whatever reason – perhaps because Chinese characters can be cumbersome to deal with when typing on a mobile phone – Chinese consumers rely more heavily on non-phone-call-related voice messaging in general for their day to day Internet activities. Nowhere is that more apparent than on mobile chat app WeChat (see next slide), for which it is the primary method of communication.

While the likes of Siri and Voxer have failed to really take hold in the US, we can expect an increase in the importance of voice messaging and commands here thanks in part to the rise of a particularly interesting piece of technology: the hands-free Google Glass. 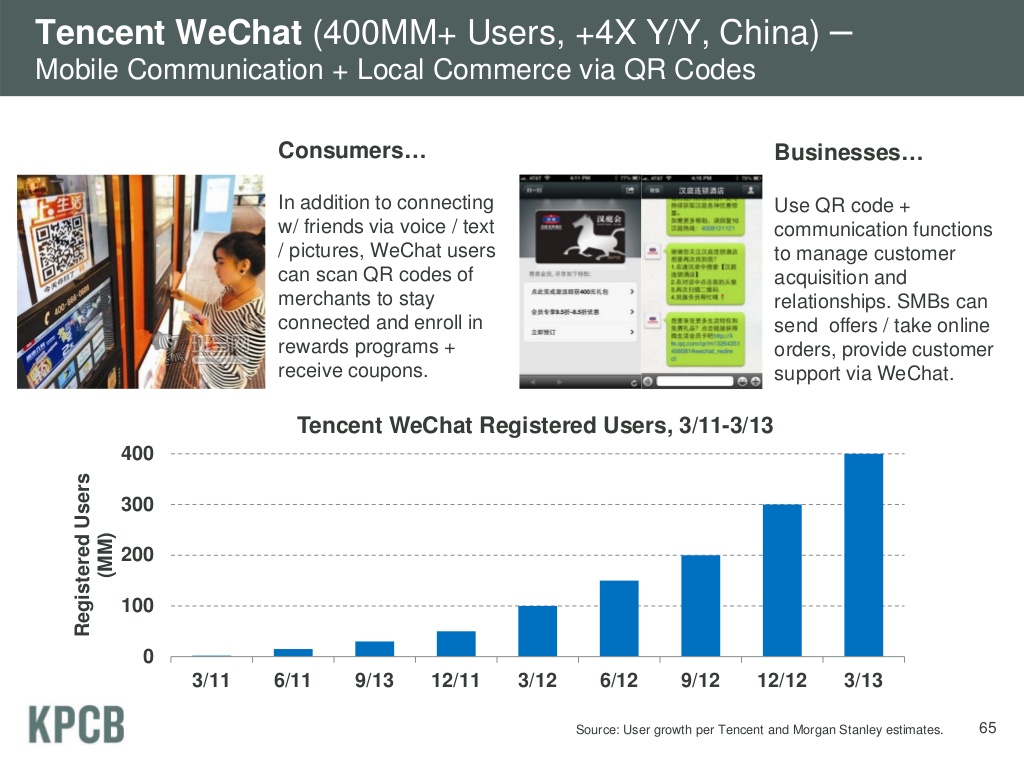 Tencent's WeChat is the world's most significant social networking and communications product outside of Facebook. Not only does it have 400 million users – 40 percent of the number Facebook has, and after just two and a half years – but it also boasts one of the most innovative business models for mobile, sending deals and discounts via brands direct to consumers, integrating a payments service in the app, and moving towards an HTML gaming platform that will take advantage of Tencent's enormous muscle as a games publisher and distributor. WeChat is moving aggressively into new markets, but it faces stiff competition from regional players such as KakaoTalk (South Korea), Line (Japan), WhatsApp, and Kik (North America). As that bar graph of steeply-increasing user numbers suggests, this is one of the most important parts of the consumer Web to watch right now. 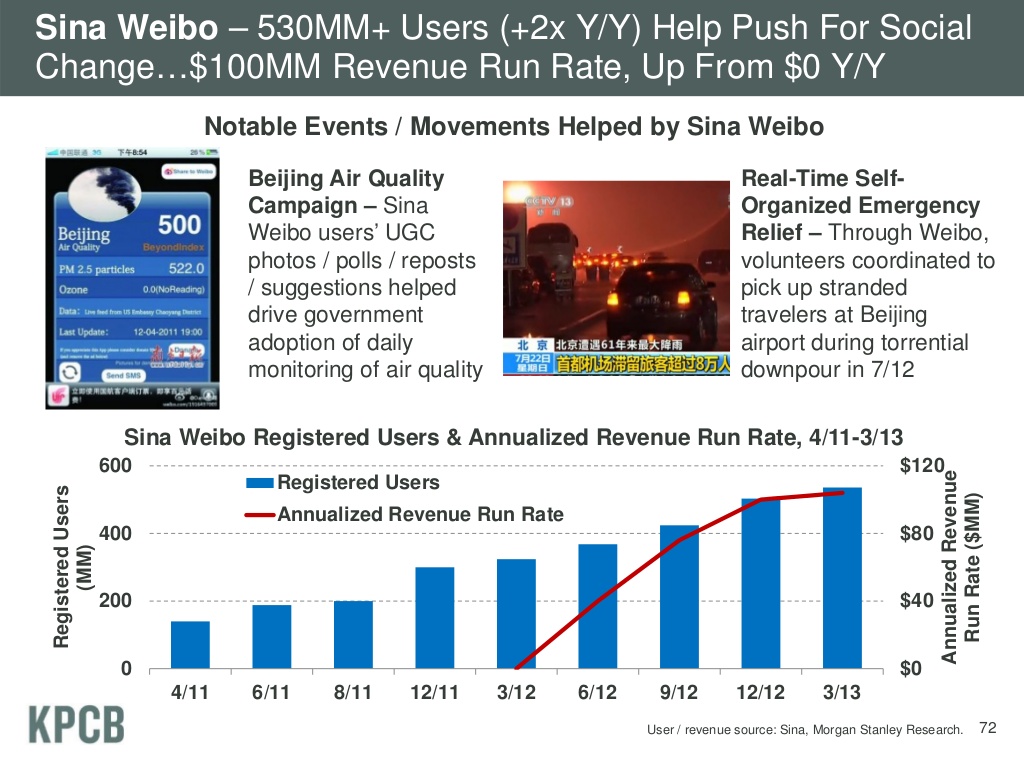 One of the consequences of WeChat's rise has been the flattening in popularity of Sina Weibo, China's leading microblogging service, as evidenced by the graph above. But the service is still highly relevant, combining the best of Facebook (threaded conversations and photo-sharing) with the best of Twitter (immediacy; a large follow graph) to serve as a powerful social force in media and communications. As New Yorker correspondent Evan Osnos told us last year, Weibo has had a real impact in fostering a culture of skepticism when it comes to messaging from the heavy-handed Chinese authorities.

And now a series of graphs that illustrate why Americans would be foolish to not watch China closely right now. These all relate to scale and volume. They show that China is clearly the world's biggest Internet market, but also that it is the world leader in smartphone ownership, and that more people access the Internet via mobile than via desktop computers – a change that has yet to take hold in the US but is inevitable.

Moral of the story: You can no longer afford to ignore China. So stop that, already. 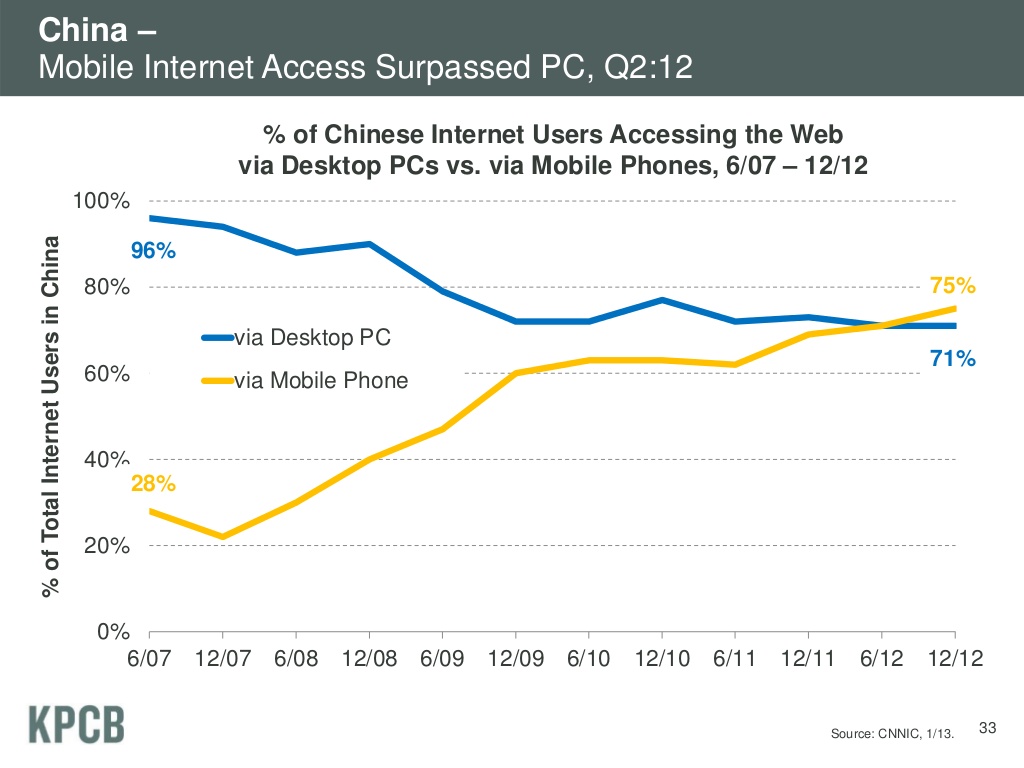 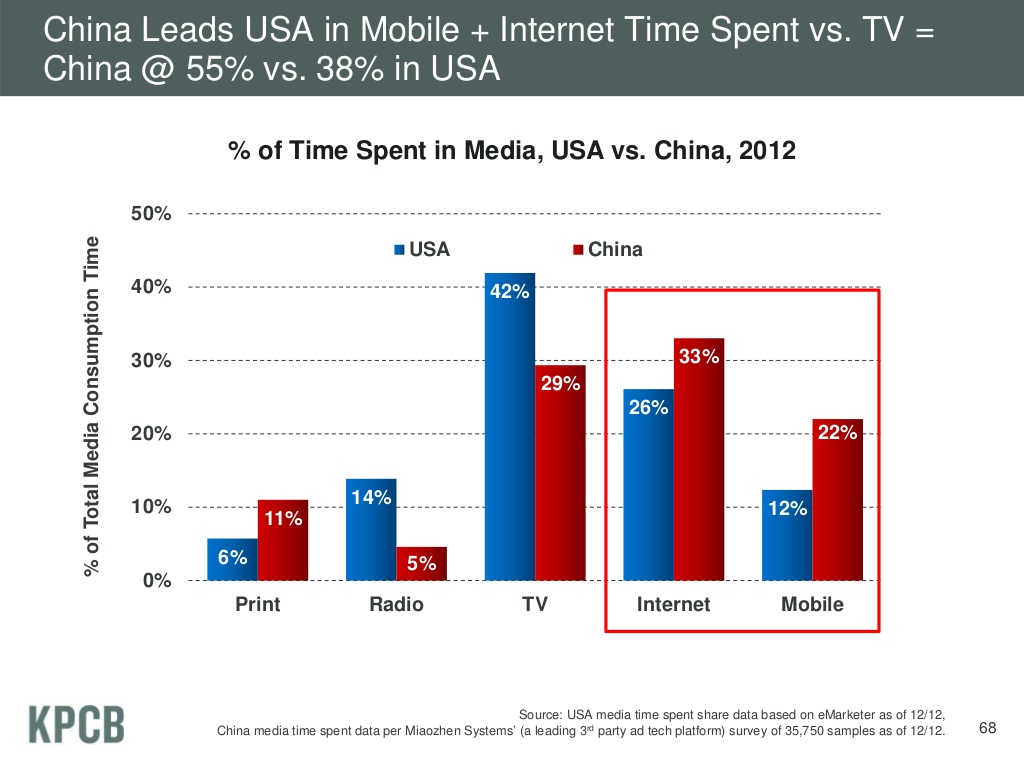 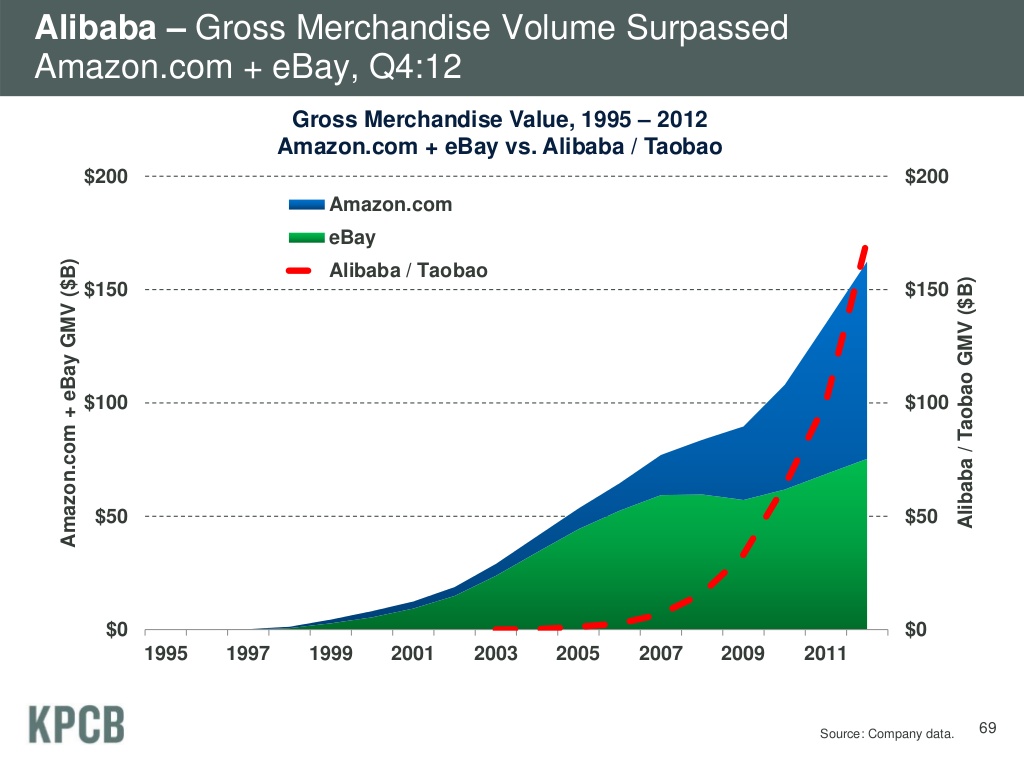 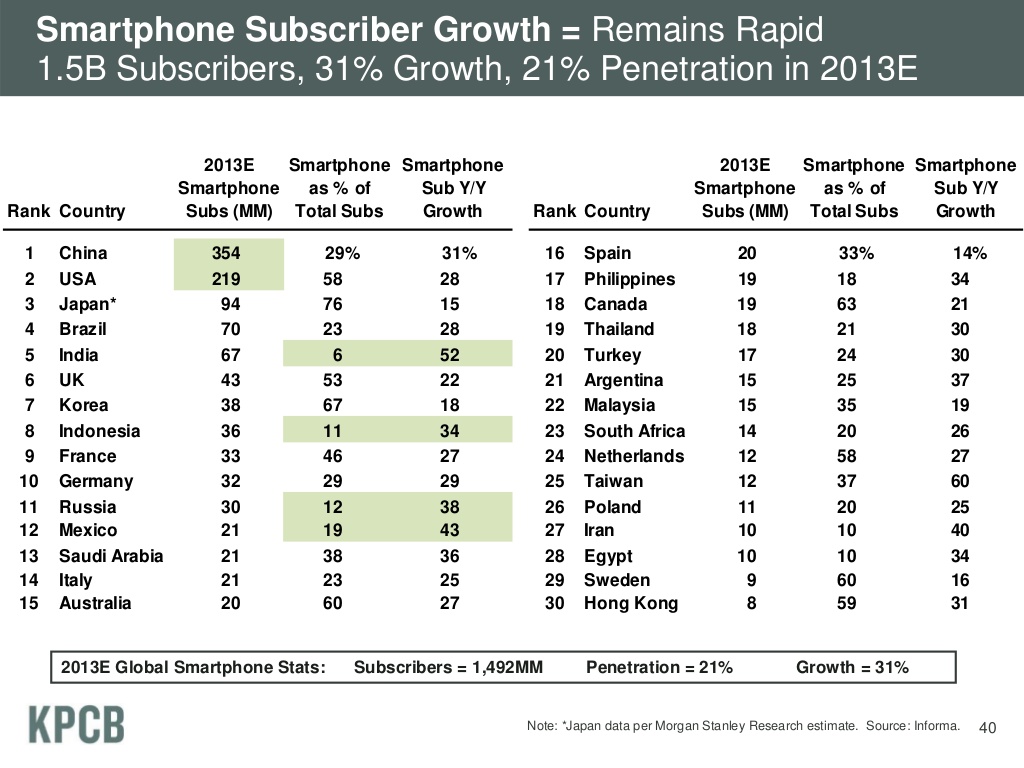 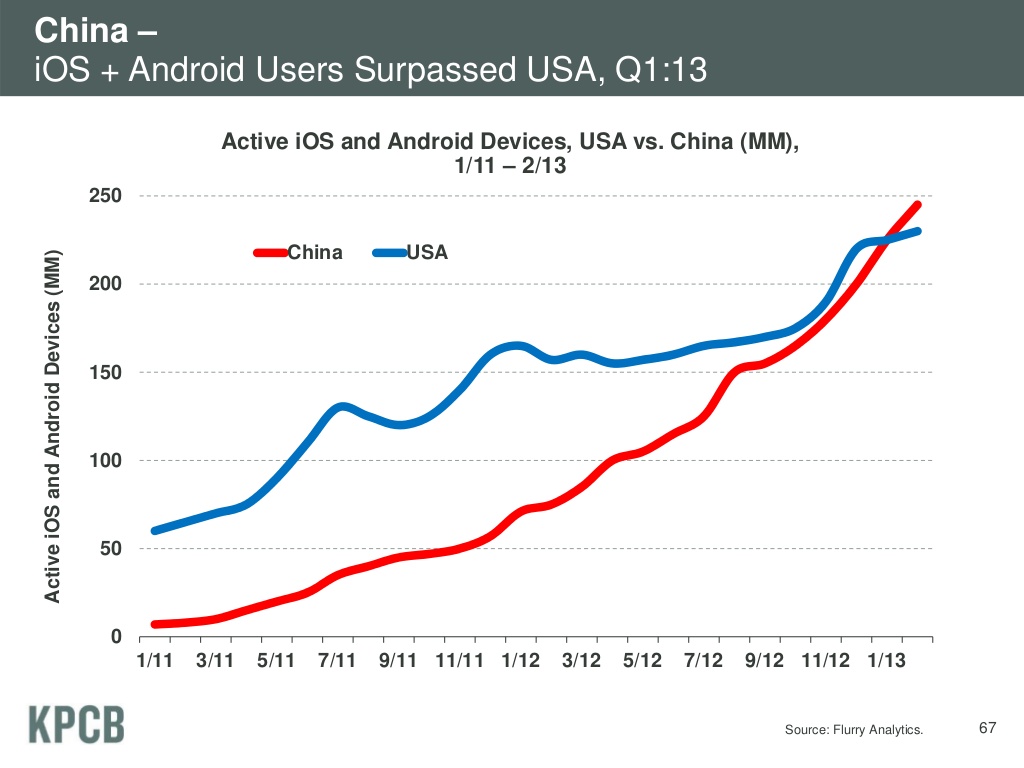