A couple of days ago, we flagged Kleiner Perkins Caulfield & Byers partner Mary Meeker's presentation at the D11 conference, and looked at the special attention she paid to China. Among the many data points she had to share about the world's biggest Internet market, Meeker included a slide that showed how ecommerce giant Jingdong (formerly 360buy) offers same-day delivery in more than 25 cities. The delivery routes, she noted, could be tracked via a map, and shoppers could even make contact with the delivery people as they did the job.

Well, today, Jingdong has more news on the same-day delivery front, and guess what: It's getting even faster. The company has announced that it is introducing three-hour delivery, and it is expanding its same-day delivery order hours from 11am to 3pm. That means that while shoppers once had to place an order before 11am to receive the shipment the same day, they now have up until 3pm, meaning the orders will arrive between 7pm and 10pm.

The new delivery options are available in six major cities, including Beijing and Shanghai. 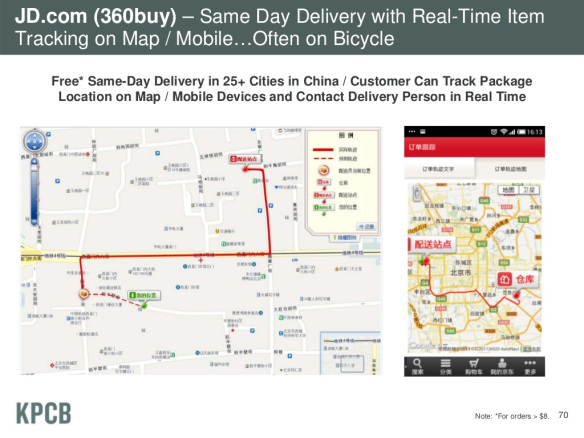 In the US, of course, even Amazon is just getting started with same-day delivery, and Google made a big show of starting a trial program in one city: San Francisco. Crowdsourcing startup Deliv is focused solely on the same-day delivery challenge. The consequences are significant, with Farhad Manjoo predicting that Amazon's same-day delivery service will eventually destroy local retail.

In China, the consequences are more significant along intra-sector competitive lines, with Jingdong constantly trying to step up its game against Alibaba's dominant Taobao and Tmall while trying to fend off other online retailers, such as electronics giants Some and Suning.

The stakes are high for Jingdong, which has raised more than $2 billion in venture capital, including a $700 million round in February led by a Saudi prince, and is still not profitable. Analysts interpreted the giant funding round as a sign that Jingdong will be racing Alibaba to a public offering. The retailer has reportedly had to delay IPO plans in the past, amid suggestions that is has been bleeding cash in the price wars that have characterized China's ecommerce sector in recent years, and that it has "lousy operating margins."

While Jingdong is expected to be profitable by as early as the end of this year, some analysts think it still may not go public until 2014 as it spends the intervening time building up its logistics network.

Three-hour delivery might help push that mission forward, but even if the move looks good on the consumer side for Jingdong, it's not going to make life any easier on the backend.