Dear VCs: Here’s the first thing to look at in a media deal

Venture Capitalists tend to ask a lot of questions. And when they are looking at media deals -- which are intimidating in their unpredictability -- they ask a ton of questions. But they can save themselves a lot of time, because there is one question that is so important that it should really be the first one they ask.

A great VC can make up his or her mind within moments of looking at a website by opening Quantcast or Comscore and looking at unique visitor growth...right?

While very important, unique visitors is a much more relative metric than venture investors realize. But here’s a metric that is important every single time: Demographic concentration.

What is this metric? How is it measured? Well, it is best demonstrated by using a great example. And there is no example more illustrative that Refinery29 vs Upworthy.

A quick visit to Quantcast will tell you that Refinery29.com enjoys about two million unique visitors per month, ranking it No. 1,270 amongst all websites in America. Those are strong numbers, but probably not enough to get any VC to jump out of bed or fly across the country to win a deal. Compare that to a red-hot site like Upworthy.com, which has fifteen million visitors and a #106 ranking.

Compare these two charts, and you will see why Refinery29 has eye-popping revenue numbers, and why Upworthy -- while very impressive -- is going to have a much harder time earning brand dollars:

Refinery29 makes a ton of money for reasons that are immediately obvious when you look at their demographic concentration.

When Revlon needs to spend $500,000 to launch a new mascara product, do you think that they want to reach a single man? No. And while they may spread that budget across two or three sites, they would be fools to omit Refinery29 from any advertising buy.

Simply stated — even though its traffic numbers are nothing to write home about, Refinery 29 will be a "must buy" in the eyes of any major advertising agency. If they grow their traffic, their revenue will continue to surge.

The only way that Upworthy can win a $500,000 advertising buy is by doing one of two things. Either they can (a) keep growing until they are so damn huge that an advertiser can do a "scale" buy with them, probably at a reduced CPM, or (b) they can create an advertising product so innovative and original that it stuns the world with its brilliance. (Note: A bunch of cheesy adtech companies will argue that they can assuage the situation with gimmicky "audience targeting" tools, but the real money is in the premium placements -- homepage takeovers, OPA pushdowns, sweepstakes, custom editorial, etc. -- and those require custom implementation.)

It appears that Upworthy understands this and is shooting for Option B, given this description on their website:

Well, first of all, we don't make much [money] yet. But our model is to connect readers with non-profits and other organizations who are looking to grow their memberships via the sign-up boxes you might have noticed on your way into the site. The infographic in our privacy policy explains it visually.

Well, that is certainly new and different. But it also means that they are reinventing the wheel. Does anybody remember how well Foursquare and Tumblr did in their attempts to reinvent the wheel? Not so well. Advertising is not a wheel that you want to reinvent.

Refinery29 does not need to invent a new path towards riches. They sell brand advertising the same way Vogue has for 120 years. Now, they are replacing Vogue. You can guess which company I would bet on.

Upworthy is a terrific company that is run by some very smart people. Their growth speaks for itself, and they have achieved large scale faster than just about anyone. They have attracted great investors for a reason. But they have a long battle ahead of them.

In fairness to Upworthy, a site’s demographics should even out as it reaches more and more people. Yahoo reaches most Americans each month, so it cannot possibly concentrate on any one segment of the population. But a few rare websites can achieve both scale and demographic concentration, and those are the ones with nine-figure exits...

Let’s take a look at Bleacher Report’s traffic on Quantcast. The site reaches nearly 30 million people each month, and is ranked No. 54 in America. So it is roughly double the size of Upworthy. But look at the demographics: 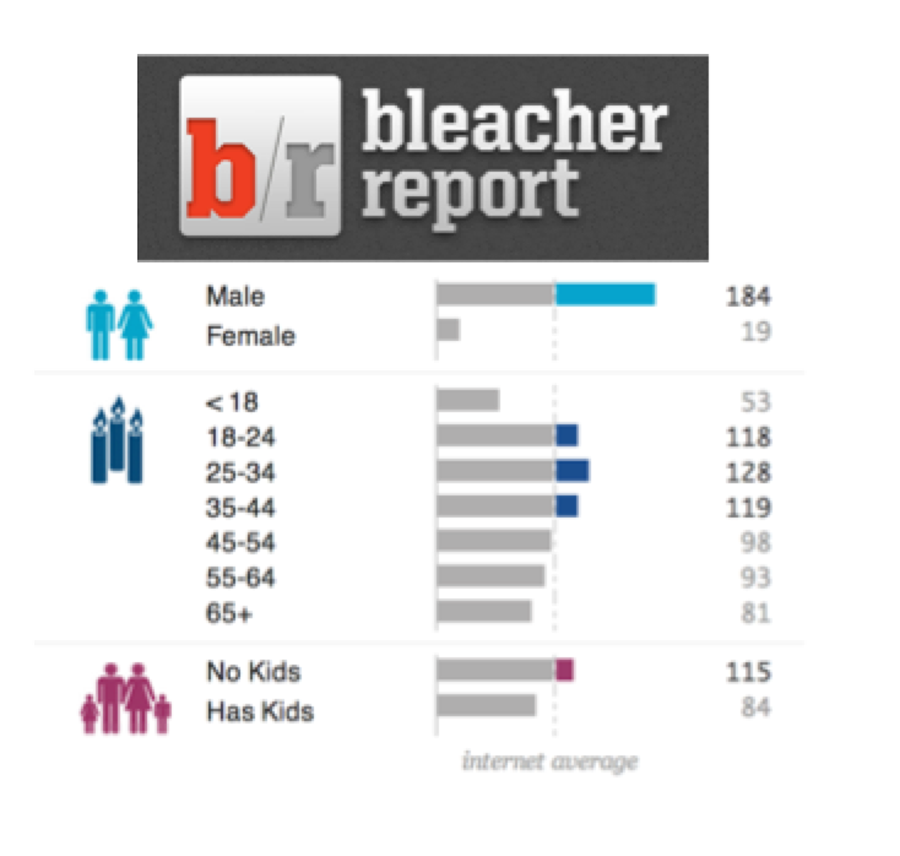 To reach 30 million people -- and still maintain a 90 percent male user base -- is absolutely stunning from a statistical standpoint. It is basically a mathematical anomaly. If you were the advertising agency representing Old Spice or Ford Trucks, you would take about four seconds in order to decide that this was a site on which you wanted to appear.

How many other options would you even have? How about zero. Even ESPN reaches a more even mix of men and women. A media site can earn leverage against its advertisers when it becomes a "must buy" site, and the only way to become a "must buy" is by having demographic concentration.

When Time Warner paid a hefty nine-figure sum to buy Bleacher Report, a lot of media commentators wondered why. The answer is contained entirely in the chart located above.

A lot of VCs avoid media deals altogether. The world of New York advertising agencies is a crazy one that is both physically and culturally foreign to Silicon Valley semiconductor types. But you don’t need a PhD in electrical engineering to understand simple math.

Advertising is the one business where diversity is bad.

[Note: I am no longer an employee of Time Warner or Bleacher Report, and I have no financial interest in either company’s go-forward earnings.]