Now the big push: Tech lobby groups up the ante on immigration reform as bill goes to Senate

As the debate about immigration reform reaches its climax in the Senate, Silicon Valley-based lobby groups Engine Advocacy and FWD.us are stepping up their efforts to get a comprehensive bill passed that would increase the quota on high-skilled immigrants allowed into the country and create a “startup visa” that allows foreign entrepreneurs to start companies in the US.

Today, Engine has launched its “Keep Us Here” campaign, designed to maximize pressure on US senators to vote for the bill when it up comes up for consideration this month, with the Senate expected to start work on the legislation on June 10.  Democratic Sen. Charles Schumer has predicted that the bill will pass the Senate by July 4. 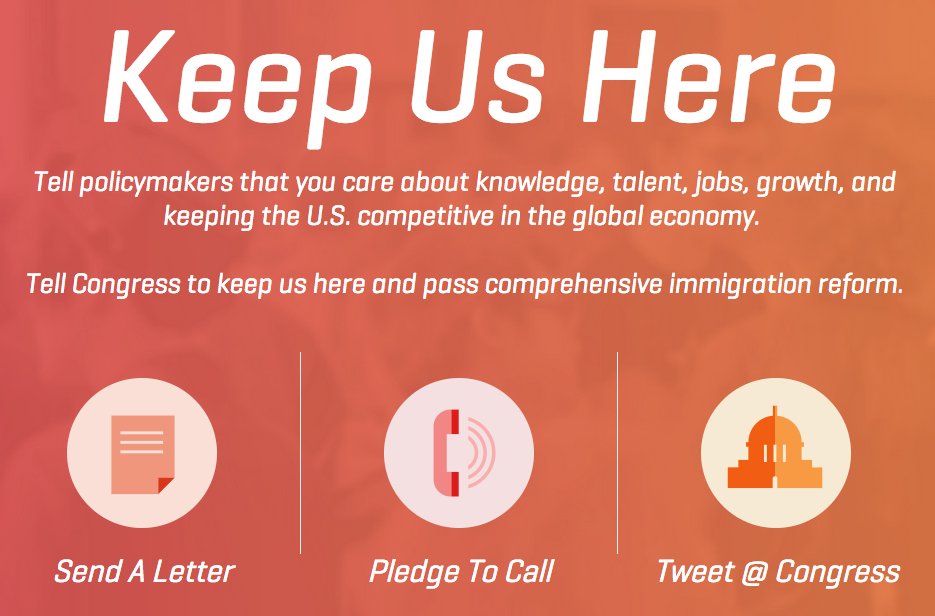 Engine’s campaign is centered around getting people to show their support for the bill via three key actions intended to catch the attention of their members of Congress: tweeting, sending a letter, and making a phone call. The group is using the same communications tools it developed for its push to quash the Stop Online Piracy Act and the Protect IP Act (SOPA and PIPA). The phone-calling tool generated so much activity during that campaign that it shut down the Senate switchboard. Engine’s hope this time round is that senators and their staffers will be similarly inundated with pro-reform messages as they prepare to vote on the bill, which is likely to be up for consideration on June 18.

To help get its message out, Engine has partnered with numerous organizations and individuals, including the March for Innovation, the Consumer Electronics Association, Silicon Valley Bank, Partnership for a New American Economy, and Sen. Mark Warner and Rep. Suzan DelBene, both Democrats.

“We’re going to need a concerted effort from people over the course of the summer and maybe into the fall to make the passage of this bill a reality,” says Engine’s director Mike McGeary, who characterizes Engine’s push as “the end of the beginning” of the group’s immigration efforts.

Even if the bill passes the Senate, it will have a tougher path through the House of Representatives, where Republicans have more control and favor a piecemeal approach to immigration reform. While the signs for the bill passing the Senate are encouraging, a comprehensive bill is a long way from becoming law. “This process is not certain, it is not governed by fact or calendar,” says McGeary, stressing the need for continual focus on the issue. “It is in many cases governed by nuance and personality.”

Meanwhile, the Mark Zuckerberg-backed lobby group FWD.us is running a similar campaign with the title “Keep the Future Here.” It has set up photo booths at graduation events around the country to highlight how international students have the potential to contribute to the national economy. Graduates pose for photos holding up whiteboards on which they have written why they support immigration reform.

On Friday, on the heels of a PandoDaily story that outlined strong criticisms of the group, FWD.us also announced that it had signed up two new members, YouTube co-founder Steve Chen, and IAC chief Barry Diller, compensating for the loss of Elon Musk and Yammer's David Sacks soon after the group helped fund ads that effectively endorsed drilling in the Arctic National Wildlife Refuge and the Keystone Pipeline. FWD.us is expected to launch a dedicated communications effort in the lead-up to the bill’s Senate consideration.