Banners are awful and search just  doesn’t translate – and so the advertising world is still searching for the perfect mobile ad unit.

That’s a problem that Rob Lawson, co-founder and COO of HDmessaging, has been thinking about for 15 years. And now his company has come up with a potential solution. Instead of jamming fat display units into the small screen experience, HDmessaging is piggybacking on text within instant messaging apps to deliver contextual information that might actually be useful and relevant. “It’s reflecting the native behavior of mobile,” says Lawson.

Called “Magic Words,” the system uses Natural Language Processing to get a sense of what people are talking about in their chats. It identifies terms that could be linked to further information and turns them into links. For instance, if you message a group of friends saying, “Let’s get pizza,” it will underline “pizza.” When clicked on, that link then brings up a page that lists Yelp recommendations for nearby pizza restaurants. Using a carousel at the bottom of the screen, the users can also see recommendations from Foursquare, Google, and the likes. Of course, the tech has applications beyond just food words, being applicable to everything from celebrity names and city names to sports teams and brands. 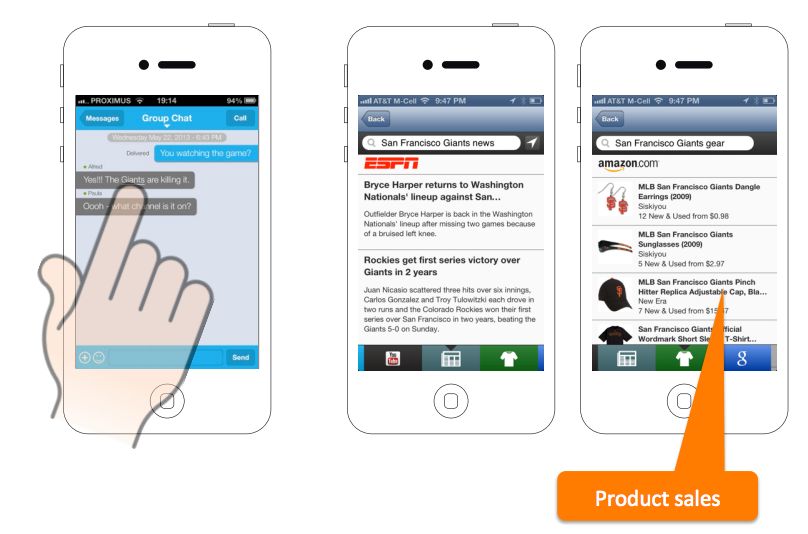 A demo of the Magic Words product

The monetization options are two-fold. Brands can buy slots in the carousel displayed on the recommendations pages, and HDmessaging takes a cut from any bookings or purchases made via Magic Words.

A couple of glaring problems jump out. First, privacy. Having your private words “read” and then highlighted within seconds of input does feel a bit NSA-y. But Lawson stresses that it’s all done automatically and anonymously by algorithms, and that no-one is looking at your stuff. The algorithms scour the content in much the same way that Gmail places contextual ads in your inbox based on what you’ve been writing and reading.

Secondly, there’s the visual blight. Words that are underlined or bolded -- or whatever UI trick the designers ultimately decide on to denote the links -- disrupt the clean messaging experience. They are, in fact, reminiscent of those awful in-text ads on the desktop Web that are often double-underlined. However, in this case, the links don’t lead to explicit ads and they only appear occasionally. Lawson says HD’s analytics show that the links appear on only 17 percent of words.

The company has also done a bit of research to see how people feel about the privacy issues and the user experience. In a survey of about 350 people, only 9 percent agreed with the statement “Magic Words invades my privacy,” and 77 percent disagreed. Only 11 percent of people said that too many words were underlined in their messages. Given that the company did the polling itself and that it’s a small sample size, you should treat those figures with due skepticism.

Magic Words has actually been in the wild for about 12 months, but HD has never spoken publicly about the product. It is already available on some messengers in India and Southeast Asia, and two apps in the US, including T-Mobile’s Bobsled. Lawson wouldn’t name the other one, but I found Magic Words in Pinger.

The team behind HD, which splits its offices between Burlingame, CA, and Helsinki, Finland, has a solid track record on mobile advertising. Its three founders – Lawson, Jonathon Linner, and Juho-Pekka Virolainen – together started a company called Enpocket in 2001. It was, at the time, one of the leading mobile advertising companies and in 2007 it was acquired by Nokia for about $150 million. Enpocket specialized in interactive ads, but then the iPhone came along and upended Nokia’s business. The company disappeared into Nokia’s Interactive Advertising division and was never heard from again.

Since leaving Enpocket, the founders haven’t dropped their pursuit of improving the mobile advertising experience. “We’ve always had this nagging belief that there’s this mobile ad unit waiting to be discovered,” says Lawson. The imperative for effective mobile monetization has become only more important in recent years, at least among advertisers, publishers, operators, and developers (consumers just have to suck it up). That need has been fueled especially by the explosion of mobile chat apps, led by WhatsApp, WeChat, Line, KakaoTalk, and Kik, among an ever-growing list of others. Operators have had to let go of the revenues they used to get from SMS. Mobile chat apps have to find ways to make their (usually) free products bring in cash. And media owners are struggling to find ways to monetize beyond banners.

For now, Magic Words is confined to the messaging experience, but it might one day break out into other areas, such as in articles or on comment threads on social networks. Lawson says some people open their messaging app just so they can type in a word, like “pizza,” that will bring up a list of options nearby, provided by a range of services. In that way, it has the potential to serve as a kind of universal search tool that reaches across app borders.

Clearly, the product has a long road ahead and its success will ultimately rest on how widely it is adopted and accepted not only by consumers, but also by business partners. For that reason, Magic Words might not be the ultimate solution to the mobile advertising problem – but it sure is an interesting one.