Traffic growth should be a marathon, not a sprint

There was a time when a person hoped to never use the word “viral” in connection with their lives. And I miss those days.

For whatever reason, the tech community -- and the young, impatient entrepreneurs who want to be rich immediately -- are obsessed with virality. Every kid in San Francisco wants to be the subject of a Horatio Alger novel, only they want to rip out the middle pages and skip right to the ending.

Sometimes it happens. That is basically the Instagram story. YouTube was kind of similar. And every couple years, yes, you will have an overnight billionaire. But, in most cases, you want steady growth.

Whenever I pitch a VC, one of the most common questions I get is this one: “When did Bleacher Report really take off?” The answer is never.

As of today, Bleacher Report is one of the 50 largest websites in the United States. That is pretty damn amazing. But what is even more fantastic is the chart of how we got there: 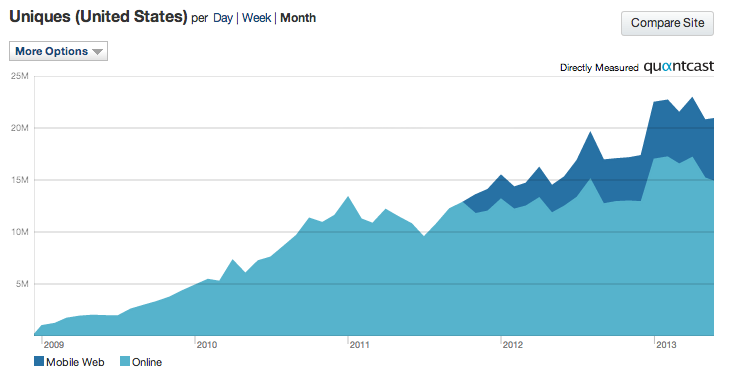 Now, I challenge any reader to pull out a pen and put an “X” over the spot in which Bleacher Report achieved escape velocity. What you may find is that it cannot be done. There was never a moment in which we “took off like a rocket.”

Our compounded annual growth rate (CAGR) over four years was 105 percent -- meaning that we doubled approximately every single year. Of course that is weighted more heavily towards the early days, but even then we hardly went “viral."

On a monthly basis, we grew about 6 percent each month over four years. Believe me, nobody’s eyes ever exploded. It was a slow and steady process.

But, you might be thinking, Bleacher Report is a media/content company. What about a platform or social network -- surely, those fit a totally different pattern for success? What would Tumblr’s chart look like?

Why don’t we take a look: 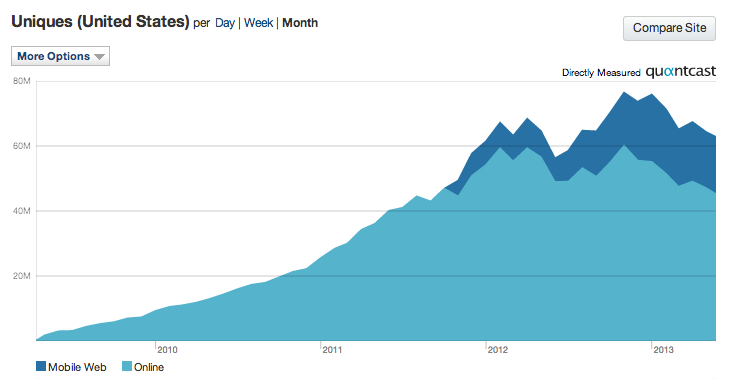 Tumblr is a Top 20 website, and therefore their CAGR was a bit higher at 130 percent, and their monthly rate was 7 percent. Over time, that compounds nicely, but even in their biggest year (5/09 to 5/10), they did not come close to growing unique visitors by quadruple-digits.

Oh, and might I add that their valuation went from about $20 million to $1 billion during the course of this diagram. That’s pretty nice.

Just over a year ago, Viddy raised a large round of capital at a valuation rumored to be nearly $370 million. Concurrently, the company that I spent five years building was about to be acquired for a little more than half that sum.

And, if you look at an Alexa chart that includes April 2012, you may get an indication of why that was: 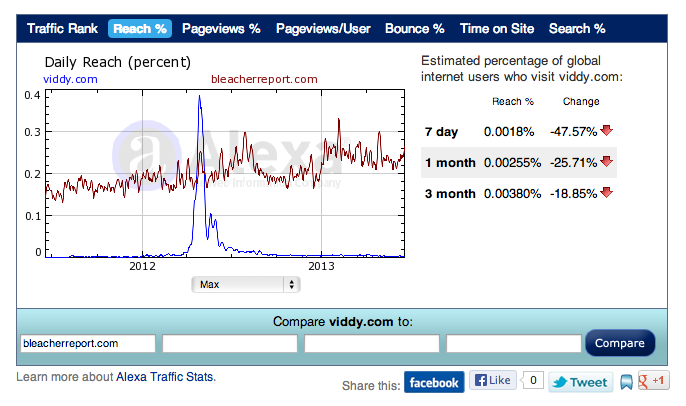 Would you believe it? For a brief period of time, in the Spring of 2012, the popular video app called Viddy really did attract about double the traffic of Bleacher Report. So their valuation was somewhat rooted in a tiny scintilla of logic.

Because Viddy ultimately joined the pantheon of “viral sensations," whose patron god is MySpace, but also includes minor deities like RockYou and Turntable.fm.

Now, in fairness to these entrepreneurs, there is nothing to stop a savvy founder from manhandling an unsuspecting late-round investor. Perhaps the Viddy and RockYou guys did well with a secondary at the expense of dumb money. The MySpace founders made a pretty penny before their boom and bust. The Foursquare founder not named Dennis Crowly may be the biggest winner in that story.

But that is the third worst way to make money -- after inheritance and the lottery.

A real entrepreneur needs to prepare himself for a marathon, and stop thinking of everything as a sprint. You don’t want to be the next Viddy, you want to be the next Tumblr or Bleacher Report, and those types of companies take time to build. So when an investor begins to piss his pants over last month’s traffic, or tries to delay a term sheet to see how next week’s unique visitors look... tell him to take a chill pill. Or, better yet, move on to a new investor.

Smart money can see through temporary traffic -- and just because you are pitching a VC, that does not mean that you are sitting face-to-face with smart money.

It’s your company, and when you over-value and crash, you will find yourself at the very bottom of a liquidation preference.

And that is a sad, lonely place to be.