In May last year, the British Medical Journal published a cover on which two staff-wielding avatars of the type you find in fantasy roleplaying games appeared alongside the question, “Can computer games help adolescents with depression?”

The cover line referred to a study inside the magazine authored by Dr Sally Merry, an associate professor of child and adolescent psychiarty at New Zealand’s Auckland University School of Medicine. Merry’s study found that a 3D animated fantasy game, called “Sparx,” proved more effective in treating depression in adolescents than face-to-face therapy. A randomized clinical trial showed that the remission rate among adolescents with mild to moderate depression who participated in the clinal trial was 44 percent, compared to 26 percent for therapy as usual.

The game’s remarkable success can be attributed in part to its application of the principles of cognitive behavioral therapy (CBT), the basic idea of which is to change how you feel by changing your thought patterns. The roleplaying game, in which players roam a fantasy world and obliterate “gloomy negative automatic thoughts” (GNATS) in order to achieve a series of goals, helps sufferers of depression replace negative thoughts with positive ones. The game has seven levels, each of which takes half an hour to complete. 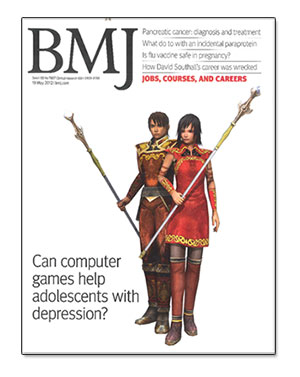 A year since the publication of the article, however, not much has happened to get the game out to the public. The game and its related research was all done on “soft” research money, Dr Merry says, and from donations. The researchers have no ongoing funding, and infrastructure costs would have made it impossible to offer the game for free. “Our biggest risk is that we will not find a way to get Sparx to young people and that would be a shame after all this work, and given that there is such a need,” Merry says by email.

But then Merry met David Burt and Frank Otenasek, founders of LinkedWellness, a Baltimore-based healthcare startup intent on bringing e-therapies to market. Burt and Otenasek, both of whom have close family members who suffer from depression, had been searching for e-therapies that have the potential to help treat people with mental health problems who would otherwise have difficult accessing quality therapy, or who wouldn’t do so because of the stigma attached to mental health issues. Both men are veteran businessmen: chief executive Burt spent a decade as CEO of a biotech company that developed a drug that treats type 2 diabetes, and he then headed Lyris, a San Francisco-based Internet marketing company; Otenasek, the COO, has three decades of banking experience and was later CEO of a Baltimore-based video marketing company. The men have self-funded LinkedWellness so far but are now in the process of fundraising.

After learning about Sparx at a conference last year and then signing a licensing agreement with Merry, Burt and Otenasek decided to make the game LinkedWellness’s flagship product. Sparx will launch in a couple of months as a cross-platform game built on the Unity 3D gaming engine. Users will be able to play the game online at any time in a Web browser. To do so, they’ll pay a monthly subscription of somewhere between $20 and $30.

Burt and Otenasek think the time is right for e-therapies to make an impact in the US. This year, the Obama Administration has made mental health a national priority. Just three weeks ago, he told mental health advocates at the White House that it’s time to bring mental illness “out of the shadows.” One in five American adults experiences a mental illness, he noted, while calling for the country to “think about mental health differently than other forms of health.”

At the same time, the Affordable Care Act – “Obamacare” – is transforming healthcare priorities. The new law requires treatment of more patients, more affordably, and with improved outcomes. Burt and Otenasek believe that Sparx ticks all boxes, as do other forms of e-therapy. The game is also an effective way to reach the 8 million young Americans who suffer from depression or anxiety but don’t have access to therapists because of location, expense, or stigma.

In some ways, it’s little surprise that Sparx was developed in New Zealand. While the country has a population of only 4 million people, mental health issues have been near the top of the country’s healthcare agenda for several years, in no small part because New Zealand has one of the highest teen suicide rates in the world. The country places so much importance on mental health issues that it recently knighted Sir John Kirwan, a former national rugby star and now a coach, for his services to the field. Kirwan, who has long suffered from depression, frequently appears on TV ad campaigns and in the media to help de-stigmatize mental illness and encourage people to seek help. As a result of this attention to mental illness, Burt says, New Zealand has a lead on the rest of the world when it comes to e-therapies. “It’s shocking how far ahead New Zealand is,” he says.

Now the challenge for LinkedWellness is translate Sparx’s success into something that works in the US and the rest of the world. One cognitive scientist thinks the game has a good chance of working. Dr Art Markman, a professor of psychology at the University of Texas and executive editor of the journal Cognitive Science, believes that cognitive behavorial therapy, the psyschotherapeutic approach on which Sparx is based, is a success story. The data on CBT across a variety of different mental health issues are “fantastic,” he says. However, for CBT to work, you have to put a lot of time into it.

“What you’re trying to do is influence thought patterns and to change habits that have built up over time as a result of a particular problem,” says Markman, who’s also the author of a book called “Smart Thinking.” A game setting could be an effective way of achieving those goals. “Placing something inside the context of a game helps to give people enough time on task to make some meaningful changes.”

As well as investing considerable business resources into the company, LinkedWellness has enlisted Dr David Brendel, a Harvard Medical School professor and author of “Healing Psychiatry,” as its chief medical officer. “There’s a lot of concern that computer games are not good for the brain longterm,” Brendel says. “We think SPARX actually stands that assumption on its head.”

There’s no cure for major depression or anxiety, Brendel says. They’re conditions that have to be managed. So he’s encouraged by the early results produced by Sparx. “Finding a set of tools that can help people get better and stay better is extremely significant.”

Of course, there is the issue of whether or not teens will actually play the game. While it is an attractive and immersive 3D fantasy escapade, it is a long way from “Halo” or “Grand Theft Auto” – and that’s being kind. Ultimately, however, they might be the wrong points of comparison. What the game is actually competing against is other forms of therapy. At Markman puts it, “This is something that could at least be decidedly not boring.”

And at the very least? “It’s better than homework.”