On the eve of Obama's climate speech, we invite you to play "Climate Change Denial Bingo!"

Today, President Obama will deliver a speech at Georgetown University calling for the US to cut carbon emissions, prepare for the impacts of climate change, and lead international efforts to address global climate change. Look for this speech to thrust the climate change debate back into the public eye for at least a news cycle or two. And while a slim majority of Republicans (52%) now agree with the overwhelming scientific consensus around climate change, we can expect to hear a lot of denial this week from the halls of Congress and from America's loudest television and radio personalities.

With that in mind, we invite you to play a game with us: "Climate Change Bingo." If you spot a politician or pundit invoking any of the classic denials below, let us know in the comments. We'll keep track with our own leaderboard, too.

Hopefully, our bingo sheets will stay pretty empty. After all, many leading conservatives are beginning to call the Republican Party's position on climate change "untenable." But this Congress has a history of anti-science tendencies, and if the recent debate about reproductive rights is any indication, we'll hear our share of climate change inanity as fast as you can spell "B-I-N-G-O." 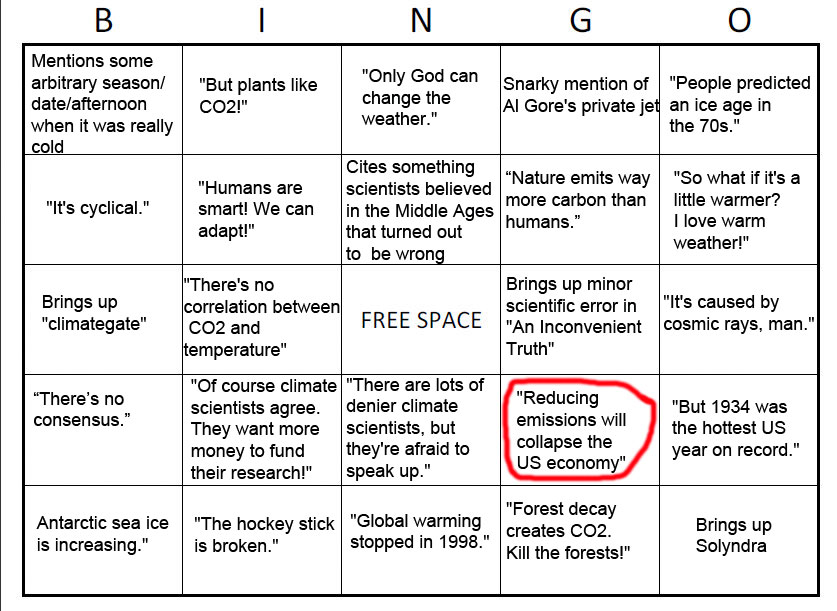 To learn more about climate change, watch our explainer video below, or click here for the interactive version.

Also here's a collection of links that debunk the claims in our Bingo board:

Mentions some arbitrary season/date/afternoon when it was really cold - Climate change is about long-term trends, not short-term phenomena.

"But plants like CO2!" - Yes, but the negative effects of climate change will likely outweigh any possible increased productivity in plants.

"Only God can change the weather." - 97% of peer-reviewed climate science articles support that climate change is caused by humans.

"People predicted an ice age in the 70s" - This became a bit of a meme in the pages of Time, Newsweek, and National Geographic. But the majority of peer-reviewed climate papers published between 1965 and 1979 supported global warming, not cooling.

"It's cyclical." - Yes, but by examining ice cores for evidence of the planet's climate over the past thousand years, we see huge growth in CO2 levels after the Industrial Revolution.

"Humans are smart! We can adapt!" - Yes, we can adapt. By reducing carbon emissions.

"Cites something scientists believed in the Middle Ages that turned out to be wrong." Yes, scientists have been wrong before. But just because scientists thought heavier objects fell faster than light objects until the 16th century, that doesn't make climate change evidence any less compelling.

"So what if it's a little warmer. I love warm weather!" - Warm weather can be a lot of fun, but it also has an array of negative consequences on human behavior, like reduced productivity.

Brings up "climategate" - The Guardian has a really good run-down of why "climategate" is not the conspiracy climate deniers would have you believe.

"There's no correlation between CO2 and temperature." - Yes, there is.

"Of course climate scientists agree. They want more money to fund their research!" - That would be a pretty vast conspiracy if 97% of peer-reviewed climate change articles were bogus.

"Reducing carbon emissions will collapse the US economy." - It could be just the opposite. A recent study found that global warming is costing the world more than $1.2 trillion a year, wiping 1.6% annually from global GDP.

"Antarctic sea ice is increasing." - It's true that in 2012 Antarctica had the greatest area of sea ice ever recorded in the region. But the explanation for why may be related to higher temperatures, whether it's due to increased snowfall thanks to greater moisture in the warm air, or due to melting ice shelves that result in a greater surface area for the ice. Either way, Arctic ice is still melting rapidly.

"The hockey stick is broken." - This refers to the "hockey stick" growth of temperature since the industrial revolution. Some scientists have been critical of the methodologies used in formulating this graph, however this is just one graph, and there are numerous studies that show anomalous trends throughout the 20th century.

"Forest decay creates CO2. Let's kill forests." - As previously stated, natural processes account for more carbon emissions than humans. But natural carbon emissions are part of a cycle and much of it is reabsorbed. Clearcutting rainforests, as Congressman Dana Rohrabacher suggested, won't do the trick.