Last time we checked in with it, Upworthy already had a pretty crazy growth story. At the time, the startup, which specializes in making videos and graphics about social issues go viral, was celebrating 11 million unique visitors in the month of March.

Well, that number now looks like chicken feed. One-year-old Upworthy has just released its stats for May showing that it hit 30 million unique visitors for the month. To put that in perspective, BuzzFeed, which publishes more than 370 pieces of content a day, gets about 50 million unique visitors a month. That number also puts Upworthy ahead of Hulu.com, NBC Sports, and Us Magazine, according to Quantcast.

The site's massive growth is a result of Upworthy mastering the art of social sharing. Its writers produce as many as 25 alternative headlines for a single piece of shared content in order to strike on the one that is most likely to grab people's attention on Facebook and other social media. Edward Kim, the CEO of social measurement company SimpleReach, says Upworthy is "the single most socially optimized site we've seen." Upworthy's content accounts for a fifth of all social actions that the company measures – and that takes into account 5,000 publishers.

Much of the company's May success can be attributed to one runaway hit: the story of Zach Sobiech, a teenager who became a rock star just before dying from cancer. The video about Zach, which had already been posted to FoxNews.com and People.com, generated 15 million pageviews thanks to Upworthy's efforts. It also attracted 1.2 million Facebook likes, and was shared more than 760,000 times. The Upworthy community helped raise $300,000 for Zach's cancer-research charity and helped drive his single, "Clouds," to number one on iTunes. 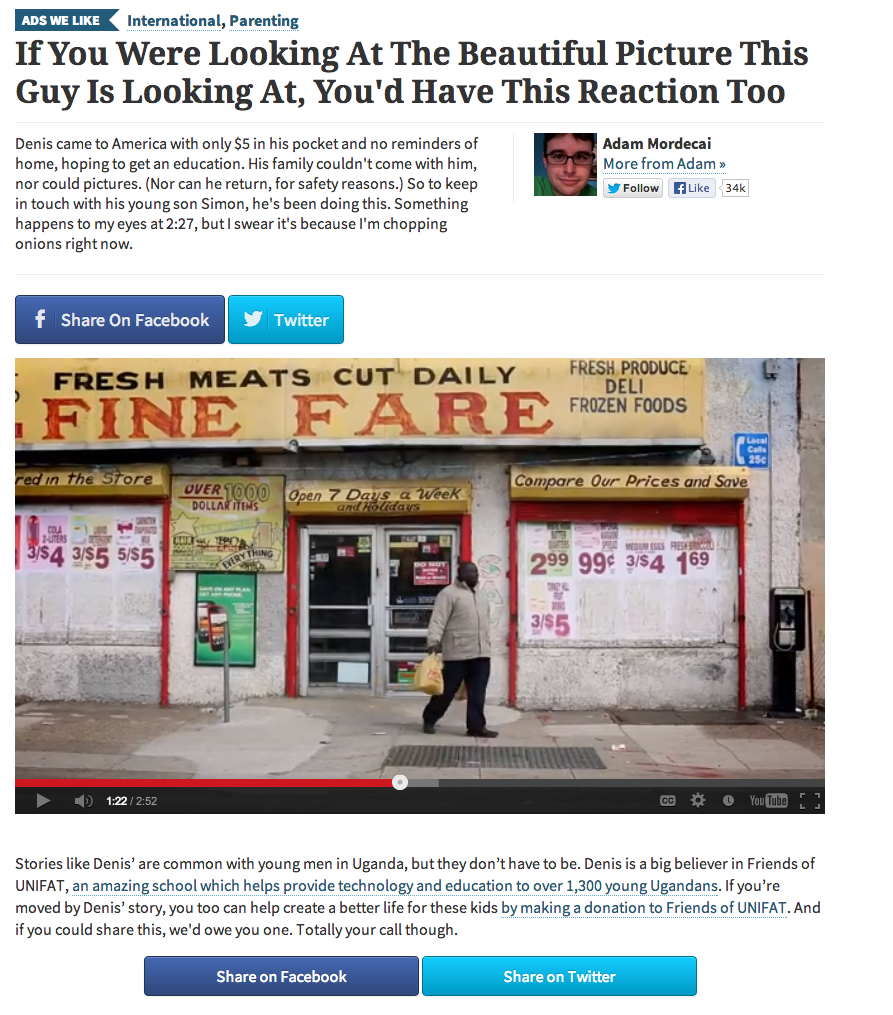 Meanwhile, Upworthy has started experimenting with more monetization. While the company has long taken referral fees from NGOs and charities to which it drives Web traffic, it is now dabbling in sponsored content. On Thursday, it pushed out its first sponsored post, a Skype ad about a Ugandan man who comes to America and uses Microsoft's teleconferencing tech to stay in touch with his family. The ad was posted under the tag "Ads we like." Upworthy's founders, Eli Pariser and Peter Koechley, say the site will only share ads that fit the brand's ethos of lifting up content that "really matters."

The company has also launched its first sponsored vertical, "Workonomics," a series about work and the economy presented by the AFL-CIO. On its website, Upworthy says, "Sometimes, when we want to pursue more specific or nuanced subjects — areas where we may have to dig deeper to find media that really moves — we look for partners to underwrite our efforts."

Pariser and Koechley say they're only dipping their toes into this sponsored-content strategy right now and will be testing it out over the summer. In the meantime, the founders remain optimistic for the prospects of building a new media company, even as the walls of traditional media businesses crumble around them.

“We’re pretty excited about the future over here," says Koechley. "There’s room to become a large, iconic media company by looking at the world as it is today and building the right media company for that moment.”

Right now might be Upworthy's moment, but the path ahead will present challenges for the company. As it scales, it will need to be careful not to inundate people with stories, lest it induce content fatigue. My Facebook feed, for instance, is already littered with Upworthy posts, only a fraction of which I can devote any time to. It's possible that Upworthy will find there's a limit to how many uplifting stories people are willing to share once their daily Internet lives are flooded with them.

It will also have to tread carefully with its sponsored content. Upworthy has built a large supportive community based on an unspoken contract that it is presenting only the best, most worthy stuff. There's only a certain number of Skype ads it can get away with before it starts undermining that contract and potentially alienating a good portion of its audience. That recognition, however, is likely why the founders are for now stressing that Upworthy's foray into sponsored content is very much at an experimental stage.

Getting the mix right might ultimately determine whether or not Upworthy can transform itself from "fastest-growing media company ever" to media mainstay of the mobile era.