Money where your mouth is: Social conversation goes the way of the enterprise

Startups are starting to bet that some words are worth more than others. Specifically, if the words come from within the walls of enterprise, they can be worth a pretty penny – more than those cheap, indiscriminate giveaways on Twitter; more than Facebook framblings (that’s a portmanteau of “family” and “ramblings,” y’all); more, even, than the “professional” updates pumped through the giant recruitment network that is LinkedIn.

At least, that’s the theory on which two guys in Cambridge, MA, are basing their new company, Industry. It’s also the underlying hypothesis for New York City-based Unison, a Yammer-like communications tool for business that now has shiny new mobile apps.

Raj Bala, co-founder and CEO of Industry, thinks there’s a space between LinkedIn and Twitter that needs to be filled. He wants Industry, a mobile-first social network for professionals that has just launched out of beta, to provide a place for people to share articles and comments about things that matter to their jobs. 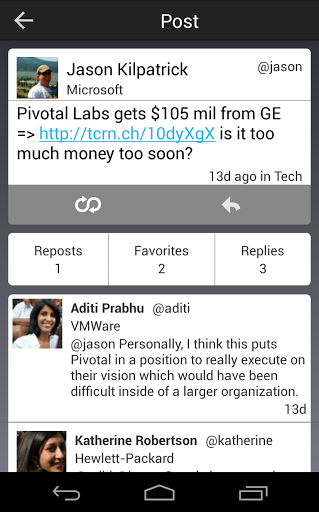 When users to sign up to the app, it takes note of their email address and deduces what company they work for and what industry they fit into. So, if you sign up with yourname@cisco.com, it’ll automatically dump you into a tech industry vertical, so you can connect with and follow people with similar professional interests. Like Twitter, it’s essentially a microblogging broadcast mechanism, except it doesn’t come with the 140-character limit.

Bala believes that the masses want a firewall between their personal and professional lives. While startup and media types might freely discuss matters pertinent to their careers on Twitter, he says, most people use the service differently. “I don’t think the masses are quite that open about talking about everything and then saying, ‘Oh by the way, I’m a product manager and responsible for a $50 million line of business at Cisco,” says Bala, who, along with his co-founder Subra Aswathanarayanan, was previously an engineer at cloud computing company EMC. Bala also founded a comments search startup called BigSwerve, which he sold to Lijit.

Industry, he believes, can bust open communications options for people in companies. “We actually think that lots of people in these companies are essentially walled up. They don’t have a means of effectively communicating with their peers.” The app is available for iOS and Android, and a Web app is in the works. So far, the tech industry vertical is the only one built out, and Bala hasn't decided how to monetize the product. In the app's early days, the company wants to focus on building a user base. It will soon also raise its first round of funding.

Bala isn’t alone in spying an opportunity to improve communications in companies for the mobile era. Since Yammer was picked up by Microsoft for $1.2 billion, there has been intense interest in enterprise communications. New York-based Unison is one of the startups hoping to attract people to its a next-generation experience that works well on mobile. Yesterday, the company released new apps for Android and iOS that facilitate one-to-one and group messaging, aimed in part at replacing WhatsApp, which some companies have been using for ad-hoc mobile communication. Prominent among Unison's features is an audio message system. 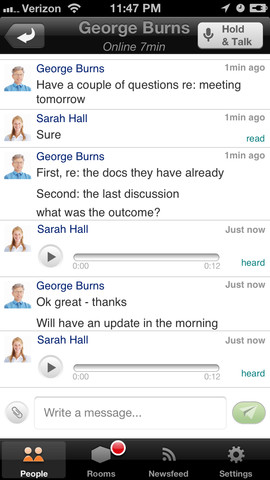 Unison CEO Manlio Carrelli thinks the messaging trend will be as large in business as it has become among consumers, who have been flocking not only to WhatsApp, but also to the likes of Kik and MessageMe, as well as Line, KakaoTalk, and WeChat in Asia. “Just as consumers moved from email to social networks and now to fast messaging apps, we believe the same trend will play out in business, as a response to today’s email and enterprise social network bloat," Carrelli said in a statement.

Both Unison and Industry will face tough battles for relevance and longevity. For Unison, the challenge will be in getting companies to switch from established habits. Yammer isn’t perfect, but it has grown to 8 million users from 5 million even in the year since it was acquired by Microsoft. It also faces an increasingly crowded field of other competitors, including Atlassian's HipChat, MangoApps, and Hall, among others. On the one-to-one side of the enterprise communications equation, it will have to face down some of the same competitors as well as WhatsApp, which has the ubiquity of 250 million worldwide users. Not impossible, sure, but certainly imposing.

Industry’s challenge is even greater. It has to convince people that it’s worth their time to sign up for yet another social network. While it is focused on a specific purpose – sharing information among professional peers – there are other platforms already serving that need in one way or another, with LinkedIn and Twitter being chief among them. But stodgy old email will also be a competitor to Industry. Getting people to establish and maintain yet another digital presence on top of those ones and Facebook, as well as adding yet another app icon to their crowded mobile phone homescreens, might well turn out to be an insurmountable task.

One more app that sends notifications, demands attention, asks you to write for it, and requires an ongoing commitment to professional upkeep?