The agony of entrepreneurship: What we learned from ex-Groupon CEO Andrew Mason's rock album

Not many musicians can say they've invented an entirely new genre. Miles Davis, Giorgio Moroder, Fela Kuti all did. Now we can add another name to the list: Andrew Mason. With his album, "Hardly Workin,'" Groupon's founder/ex-CEO has the dubious distinction of creating a category I'll call "motivational business rock." Sure, there have been half-hearted attempts in the past. Remember "One Bank," "9 to 5," Dolly Parton's ode to the 40-hour work week, and Johnny Paycheck's "Take This Job and Shove It"?  But Mason's "Hardly Workin'" is the first complete album that fully embraces the awkward intersection of pop music and business advice. It's not unlike Christian Rock, which makes sense: To some in the Valley entrepreneurship is its own religion.

And yet, throughout the album Mason largely avoids the aspirational myth of Silicon Valley creators changing the world. For him, It's all about making money and upward mobility, and 90% of the album's lyrics seek that as the end-game for all this business advice. This sentiment won't make him many friends outside the Valley, but at least it's honest, and an appropriate distillation of much of the tech world today, where how much money you make is sometimes the only metric that matters.

But the question must be raised: Is Mason fucking with us? Is the album a joke? Performance art? A brilliant self-psychoanalysis of a bitter entrepreneur, burned by an ill-fated IPO? Follow us on a journey into the mind of Mason as we dissect what has to be the oddest response to being let go from your CEO job. (Are you listening, Mark Pincus? Don't let Mason show you up...)

The record's opener is all sassy drums and G. Love-inspired acoustic grooves. I close my eyes and imagine Andrew Mason throwing beautiful Frisbee parabolas at the intramural Ultimate tournament. But we all know what's coming: Mason doesn't make it 10 words before using the word, "MBA." Meanwhile the contours of his singing voice are aggressively unchill, like a countrified Scott Stapp that brings together butt-rock baritone and Nashville twang like barbequed farts.

What about the lyrics? We learn a few things about Mason straight-away. He doesn't care much for Malcolm Gladwell, treating "The Tipping Point" with the same derision Lynyrd Skynyrd once reserved for Neil Young. Squeezed between the cliches and homespun plain-talk, Mason sneaks in one truly inspired and original line about... the transformational power of "the birthing of great octopi." This is the secret of business, folks. Witness the birthing of great octopi and you'll have more billion-dollar business ideas than you know what to do with. Put it on a poster in your office and watch the cash roll in. 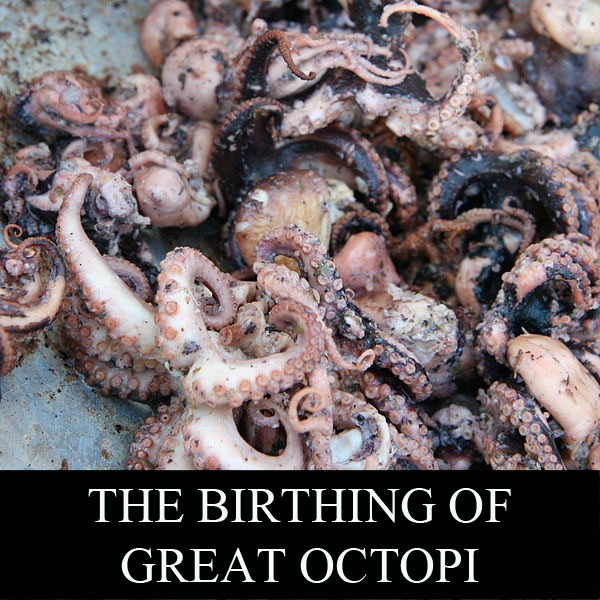 Track 2: The Way to Work

Chunky and driving, this is a classic Springsteen-esque road jam, as Mason sings about cruising along the streets of Chicago on his GTS 300. He enters a hypnotic state, taking the opportunity to reflect on a problem in his HR department. And he's found the solution! Nothing like the road to get your brain gears working again. It's a ridiculous conceit made even more ridiculous when I looked up what a GTS 300 is. Mason's preferred mode of transportation isn't a motorcycle or a sports car, but a Vespa. Throughout the history of pop music, an artist's chosen mode of transportion says a lot about that individual, from the Beach Boys' "Little Deuce Coupe" to Rick Ross' Maybach. In this sense, it's fitting that the nerdy yet efficient Vespa should come to represent the hopes and dreams of an entrepreneur.

Track 3: My Door is Always Open

Do you like "The Rainbow Connection"? And open-door policies? Then you will love this track. The duet rips off the melody to everyone's favorite Muppet song as Mason trades verses with an enterprising young upstart who sounds like either an androgynous child or a stuffed animal.

My door is always open

In a culture of transparency

it's not just a right

Track 4: Risin' Above the Pack

"Risin' Above the Pack" is basically a glorified karaoke cover of Kansas' "Carry On My Wayward Son." Leave behind the music for a second: From the title "Risin' Above the Pack," you might expect Mason to croon about the early stratospheric rise of Groupon. Evidently, though, the wounds from Groupon's fall are too fresh. Instead the song focuses on a young employee rising through the ranks of what sounds like a large corporation.

The lyrics are straight-out of a self-help guide, but what strikes me is how Mason juxtaposes his hero's ambitions with minor-key chords that lend a sense of darkness to the proceedings. It's implicitly anti-corporate. And because of the relentless cheeriness of the other six tracks, I guess you could say this is the closest Mason gets to confronting the ghosts of Groupon. Does Mason attribute his own downfall to ambition? Or corporate interests that cut Groupon off because of the increasingly bad value propositions of its deals? Don't hide your feelings, Mason. We know you're trying to reach out. When you're ready to write a proper explanation of your thoughts set to another prog-rock anthem, let us know. I suggest Styx's "Mr. Roboto."

Here, Mason is so close to making it work. In the business world, K.I.S.S. is an acronym that means, "Keep it simple, stupid," which is decent advice that applies to many situations. A kiss is also the act of placing your puckered lips onto a person or thing and is commonly referenced in pop songs written by human beings. So this should work, right? Take a business metaphor, adapt it to the vocabulary of pop music, throw some double entendres in there and it shouldn't suck too badly.

But instead of employing a clever extended kiss/K.I.S.S. metaphor, the song is painfully literal: "Work design down to the smallest mount of buttons / The minimum required to ship." And then there's this unfortunate lyric: "Don't make me cut through no thistles / You can keep all your fancy bells and whistles." Mason, your rhyming dictionary is showing.

A note on Bishop Lamont. Bishop Lamont is a hip-hop recording artist who at various points in time has been associated with Dr. Dre, Eminem, 50 Cent, Busta Rhymes, and Warren G. What's he doing now? You already know: Guest-rapping on the ex-Groupon CEO's motivational biz-rock album. This partnership makes more sense than you might think. For a long time, Bishop Lamont was said to play a major role on Dr. Dre's long-awaited followup to Chronic 2001, Detox. Few albums were so anticipated, and yet 12 years later the album still hasn't been released.

Compare that to the early excitement of Groupon, called "the fastest growing company ever." Now Groupon is at best a cautionary tale and at worst a punchline, and Mason is out. As for Lamont, he left Dr. Dre and Aftermath Records in 2010 on his own volition, because the delays associated with Detox were preventing him from releasing his own solo album. By virtue of featuring Lamont on his album, Mason is perhaps tacitly admitting that Groupon was holding him back (although unlike Lamont, Mason was ousted). Here's hoping that both men can leave their old lives behind them and rebuild.

Oh and as for the song, the lyrics are bland and literal as ever, but are juxtaposed against a pretty good funk groove that isn't completely terrible. Meanwhile, Lamont's rap is the second high-profile hip-hop verse of the year to mention the Hamptons, but while Kanye would like nothing more than to defile the Hamptons and everybody who calls it home, Lamont revels in the dream of reaching them, preferably in a yacht, unintentionally highlighting the unsavory class dynamics of startups and entrepreneurship.

Maybe the best song on the album, if only because Mason is able to keep the lyrics away from technical jargon for a full minute. The simple and pleasant refrain of "It's Up To Us," sang over delicate piano chords, wouldn't sound out of place on a Flaming Lips album.

But soon Mason brings the lyrics back to earth, talking about markets and disruption, and I think George Washington? In the view of entrepreneurship espoused by Mason, making bank is the only thing that matters. Is it possible that he's so deluded as to compare the shallowest breed of entrepreneur to the founding fathers?

And maybe that's the lethal combination that doomed Mason: Limited vision coupled with an out-sized sense of self. He'll have to do something about one of those things if he plans to succeed with his next endeavor.

Adam Penenberg and I thought it'd be fun to write our own Andrew Mason lyrics about what's really on his mind: The downfall of Groupon. Without further ado, we present "The Ballad of Andrew Mason":

I was an activist but my business wouldn't scale.  Discounted a pizza and now Groupon couldn't fail.  Had a billion in revenue before too long Did an IPO, what could possibly go wrong?

Then we lost our way And nothing is OK...