Not pretty, but profitable: Wall St Cheat Sheet writes its own rules for new media

The Wall St Cheat Sheet looks like a throwback to an almost-obsolete Internet media era. Banners are dead? Not here. The site has two on each page, along with three square ad units, a skypscraper, a small rectangle, and a grid of eight recommended stories that are really just sponsored placements. On the mobile version, a banner slips into the bottom of the screen, masquerading as a piece of editorial content but linking to sponsored listings for stock tips.

The site design is cluttered and retrograde. It remains one of the hold-out websites that uses paginations on its news stories, even ones of less than 600 words, just to squeeze out a few more pageviews. There are newsletter signups, numerous calls to check out other stories, a "trending" ticker, and two search bars. Even the photo within each story gets an ad overlay. The site, essentially, is a mess, reminiscent of Yahoo circa 2003.

But people are reading this website. What's more, it’s doing something unusual for a media company: making a lot of money.

Last month, four-year-old Cheat Sheet reported more than 11 million unique visitors and generated 47 million pageviews. It has annual gross revenue of about $15 million, and profit in the millions (the founders wouldn't be more specific than that). Quantcast, which is by no means a perfect measure, puts the site's monthly uniques at about 7.4 million, well above, for instance, Business Insider, which clocks about 2 million a month.

The Wall St Cheat Sheet might not look pretty, but its founders, brothers Damien and Derek Hoffman, have managed to start a media company in the middle of the Great Financial Crisis and grow it to a 35-person operation.

After careers that took them through the first dotcom boom (via body piercing jewelry site Tribalectic), law school, banking, a media agency, and a brief stint with their own music label, the Hoffman brothers decided to build a business that matched their knowledge of the stock market with their interest in media. Because they bootstrapped the company, they had to think about profitability from day one, which explains why the site is plastered in ads. 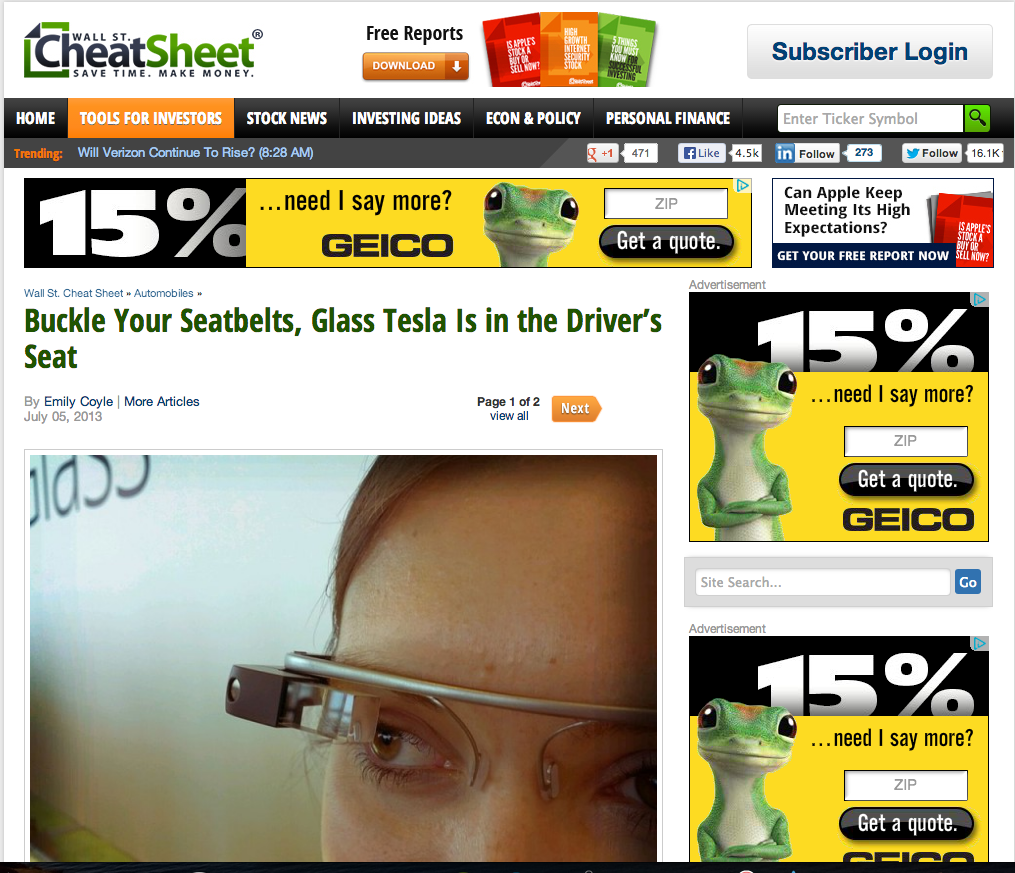 The site’s big break came after the founders sought advice from Marketwatch founder, and now USA Today publisher, Larry Kramer, who helped the company secure distribution deals with Marketwatch and Yahoo Finance. Today, Kramer is chairman of the board. Bleacher Report founder Bryan Goldberg, a contributor to PandoDaily, also sits on the board. (Consider that a disclosure.)

Wall St Cheat Sheet serves up commentary and analysis on investing news for a mass market audience, but it steadfastly avoids news. Many of its headlines are written as questions – “Will Verizon Continue to Rise?”, “Do the iOS7 Design Changes Go Too Far?”, “How Much Smaller Will the Jeep Go”? – and its editorial team churns out about 100 articles a day. That number increases sharply during earnings season, when the article count can top 300. Because the editors want to retain a unified and distinctive editorial voice, the company rarely uses freelancers. About three-quarters of its 35-person staff are dedicated to editorial.

While other New York new media companies such as BuzzFeed and Vox Media – the publisher of The Verge, Polygon, and SB Nation – stand out for bold investments in design and staffing on the steam of big-money venture backing, the Wall Street Cheat Sheet stands out for being lean, ugly, and unashamedly pageview-motivated. It has to be – 90 percent of its revenue comes from ads, says CEO Damien Hoffman. The rest comes from its subscription newsletters.

The big question for the Cheat Sheet, which plans to expand to other verticals such as sports and politics, is how long this ad-supported model will hold. The CPM ad unit is declining in value, delivering diminishing returns to publishers and demanding that they keep churning out more and more content to stay afloat. Hoffman acknowledges the challenge and says the company in the future will experiment with other revenue models in the future, such as mobile commerce and lead generation. He realizes the "NASCAR" model of advertising isn't the prettiest or sustainable way to build a large company. It has served its purpose of bringing in revenue to sustain the bootstrapped company, but it is working now on building its own internal sales force that can streamline the ad efforts a bit.

Hoffman also says a paywall is unlikely to ever play a part on the site. “I still think that my generation thinks content should be free so it’s very scary to me to build a big paywall for the long term,” says Hoffman, who is 35. “Too many young people are savvy enough to take the title of a story and go search for it in Google.”

And what of that eyesore design? Well, that’s simply a matter of being pragmatic, Hoffman says. Because its audience skews older, it tends to lag on the tech-uptake curve. “If we get too far ahead of the curve, it’s the case that we get complaints from people that their browser doesn’t read our site.”

That may not be a sexy proposition for a new media company in 2013, but it is so far proving to be a profitable one.