Downpour expected: How the rise of nowcasting will change our lives

Nowcasting, which is the forecasting of immediately imminent weather events based on specific locations, got its start in the 1860s. Admiral Robert Fitzroy, who established the UK’s Meteorogical Office, set up a system in which England’s ports could get reasonable warning of impending storms. In scientific terms, according to the Met Office, it was a pretty hacky method. In tech terms, it was crowdsourcing. Fitzroy would collect reports of storms from around the coast and then share them with the ports downwind.

More than 150 years later, thanks to location-enabled smartphones and increasingly sophisticated weather technologies, both the methodology and application of nowcasting has improved considerably, to put it mildly. Imagine getting ready to leave your house and noticing that the umbrella sitting by the door has a glowing handle. It’s telling you that it’s about to rain, and perhaps you should take it with you. Imagine that the alarm on your smartphone wakes you up 10 minutes earlier than usual because it knows you’ll have to clear a few inches of snow off your car before you drive to work. Imagine that the ads on digital billboards change around you as clouds start to gather above.

None of these examples are far-fetched. Some of them are already happening. Startups, app makers, and traditional forecasters are lining up to capitalize on the rise of nowcasting, and it could unleash a wave of innovation that straps thrusters onto the “Internet of Things” era. 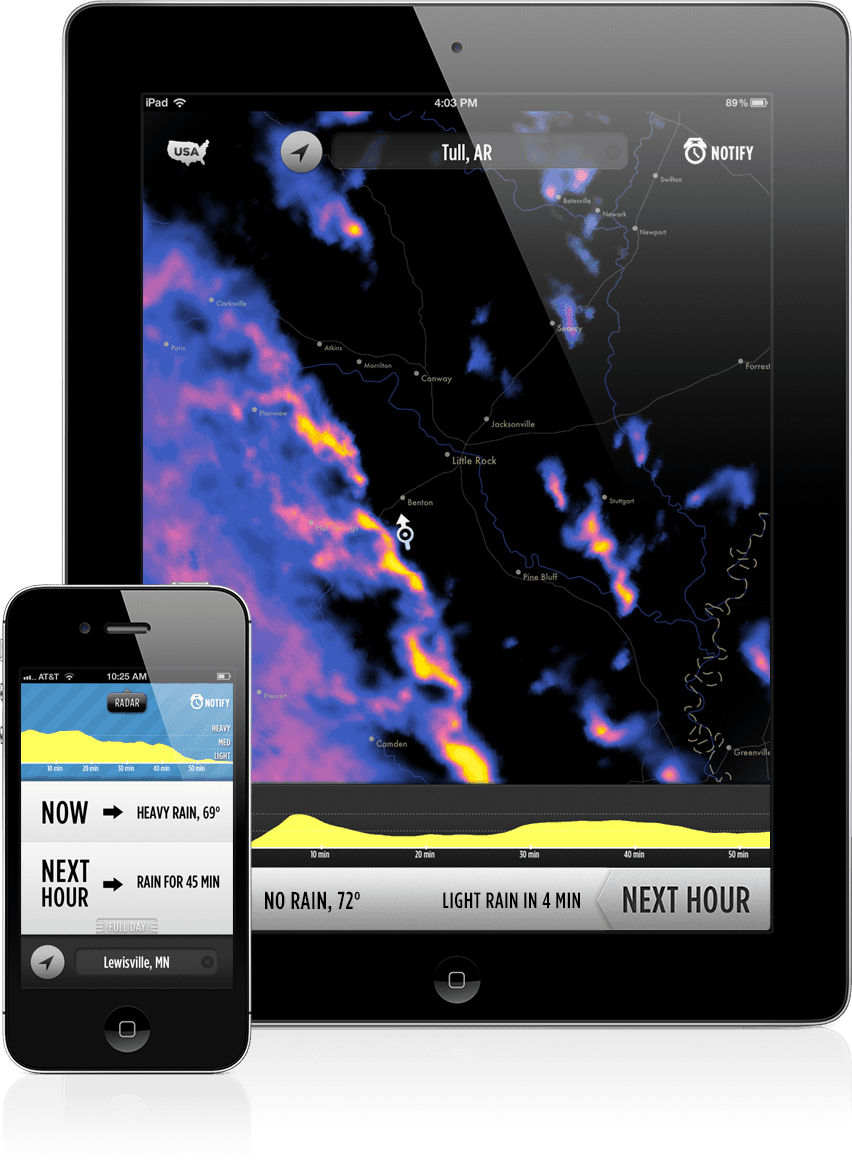 “We’re just starting that trend towards nowcasting being important in people's lives,” says Adam Grossman, one of the developers behind Dark Sky, an app for iPhone and iPad that attempts to predict down to the minute when it is going to rain or snow in your exact location. Apps such as Dark Sky, SkyMotion, RainAware, Nooly, and the Weather Channel’s TruPoint are advancing not only the science of nowcasting, but also the way it looks, taking rain radar data and giving it a lick of digital paint, so it looks beautiful rather than confounding.

The concurrent rise of location-enabled personal devices, the ubiquity of the Internet, and technological advances in weather forecasting has made nowcasting more powerful and exciting than ever before. Grossman says he got the idea for DarkSky when he was driving from his home in upstate New York to Cleveland, OH, one day and found himself stuck in a torrential downpour after stopping for gas. He opened the weather app on his phone and it said: “40 percent chance of rain.” Nowcasting is at least more accurate than that.

Rose, who has a PhD in meteorology, helped design and devlop the Weather Channel’s nowcasting tech, TruPoint, about five years ago. It lives on all Weather.com’s digital properties. The service provides 15-minute forecasts for seven hours at a time, adapting dynamically as weather systems change throughout the day. It has been enabled, Rose says, by improved computer simulation methods that continuosly monitor radars and algorithms that tweak predictions accordingly. “The idea of a numerical weather prediction model that is a computer simulation of the atmosphere that runs almost conitnuously is probably the most important advance that we had recently,” says Rose.

Nowcasting is a complicated scientific proposition. Usually, meteorologists attack it using a two-pronged approach, Rose explains. The first part of the equation is based on looking at the rain radar and projecting forward in time in a sensible way, accounting for approximate growth or decay in weather systems. The problem with that approach is that weather on a micro scale is often highly volatile. A storm, for instance, might die in one place and pop up somewhere else seemingly randomly. To counter those effects, nowcasting also relies in part on numerical models, which run concurrently to predict how rain will move in the very short term. The Weather Channel blends these two approaches dynamically, adjusting the role each part of the equation takes depending on the conditions. In cases of steady rain, for instance, the forecast depends heavily on radar-based projections; in the case of supercell thunderstorms, the models play a greater role.

“It is an extremely difficult problem,” says Rose, who adds that the nowcasting status quo is less than 20 percent of what could be achieved -- and the system will never be perfect. For the Weather Channel, communicating that element of doubt in its forecasting is very important. While the consumer wants a yes/no answer on whether or not it’s going to rain in the next hour, the current state of the science simply doesn’t allow for such certainty. 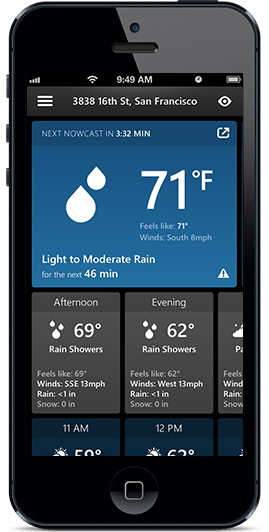 Meanwhile, Montreal-based startup SkyMotion, which predicts when rain will start and stop and how intense it will be, uses a technique adopted from the film industry to aid its nowcasting. The company’s founder and chief technology officer, André LeBlanc, is an expert in image processing. While working for computer graphics company Discreet Logic, which was acquired by Autodesk in 1998, LeBlanc helped develope motion-tracking technology for film special effects that won him a share in an Academy Award. LeBlanc’s tech identifies cells and systems and tracks movement frame by frame. Using that method, SkyMotion can extrapolate where the weather system is going.

“Our claim is that you don’t have to settle for ‘current view’ anymore – it’s useless,” says SkyMotion’s CEO, Maxime Julien. “Today you can have a signal that says ‘Rain for 34 minutes.’” SkyMotion recently opened up part of its API, so clients can use the data for their own purposes. One of its customers is a bike-sharing company for which nowcasts are particularly useful, because renters use their bikes for an average of 16 minutes a time.

Oscar-winning image processing aside, Julien believes his app’s biggest advantage comes from crowdsourcing the “last mile” on weather information. By having large numbers of people communicate what the weather is like where they are at a certain time, SkyMotion can get a clearer picture of what is happening on the ground level.

About 200,000 people have at some point given such information to SkyMotion, says Julien, providing more data points for the app to consider in delivering its nowcasts. Such crowdsourcing could kick into high gear when a wider range of devices are connected to the Internet. For example, SkyMotion could get notified any time a car’s windscreen wipers are switched on. Ultimately, Julien wants SkyMotion to be for weather what Waze is for map data. But he’s not alone in that goal. Weathermob, Wezzoo, Weendy, Metwit, Weddar, and Minutely are all hoping the same.

It seems poetic that, despite the advances in mobile technology and weather forecasting of the past 150 years, perhaps one of the keys to nowcasting’s ultimate efficacy can be found in the approach pioneered by an Admiral in the 19th century. Just think would Robert Fitzroy could have achieved if he had Google Maps.