How concert app Loudie doubled its users in two weeks

When Lance Dashoff launched Loudie in 2011, he envisioned it as a giant Internet portal for all things music. People would use it to connect to friends, purchase tickets, check into venues, and share stories. The only trouble was, there's already a giant Internet portal for music fans: The Internet. Or Twitter. Or Facebook. Or any other established site that doesn't require you to reengineer your friend network for every niche and sub-niche. Loudie's early struggles for traction weren't unlike new Myspace's struggles. And if Myspace couldn't succeed with a household brand and a top recording artist at its back, what hope did Loudie have?

"The problem of most first-time startup founders is that you want to be everything to everyone," Dashoff says. So he spent the last year stripping Loudie down to its essence, cutting features and simplifying its scope. Now, instead of "a social network for music fans," the app basically does three things: It tells you when your favorite bands are coming to town, it tells you which of your friends are going to which concerts, and it rewards points based on in-app actions like following bands or posting to Twitter and Facebook. And since rescuing Loudie from creeping featurism two weeks ago, the app has doubled its user base. (In celebration of this milestone, any user who signs up today will receive 30 points, enough to potentially score a festival pass). 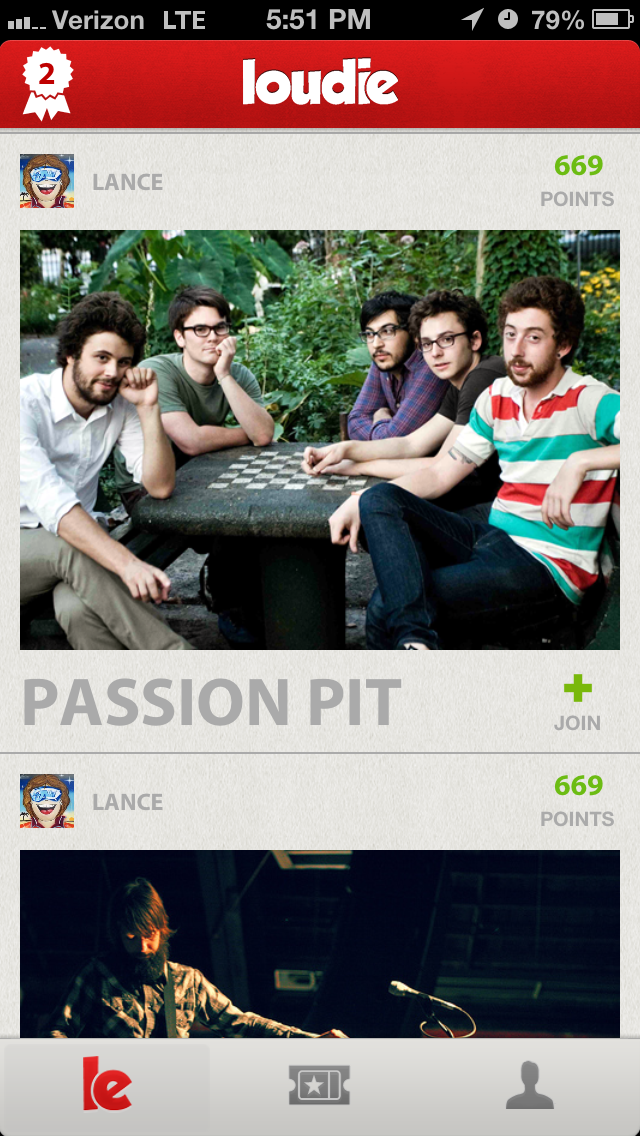 Now I may have lost you at "posting to Twitter and Facebook." One of the great agonies of Web 3.0 is when apps post on your behalf (see the Jay-Z Samsung fiasco). But the good news is, Louder's points aren't exchanged for mere swag or for weird "experiences" where the band comes and gives you an awkward guitar lesson. (Who wants that?) They're exchanged for one of the only musical experiences fans will still pay for: concert tickets. Loudie has given out passes to Lollapalooza, Outside Lands, and one-off club shows in New York and Los Angeles for artists like Twin Shadow and Goldie. Loudie purchases these tickets at promotional rates through a partnership with Dashoff's day-job employer Red Light Management, which manages Dave Matthews Band and Alicia Keys and helps produce Bonnaroo.

So what do artists and their management get out of offering Loudie tickets at promotional rates? "From their perspective, whenever someone is joining a show, and they're getting their alert, that's basically free marketing for the event." Dashoff goes on to explain that as traditional revenue streams continue to dry up, musicians are touring more than ever, resulting in a saturated market. Any edge to get people in the door is extremely valuable.

Of course, relying on Facebook's Open Graph instead of your own community does have its disadvantages. Much has been made of how your Facebook friend circle is beginning to bear less and less of a resemblance to your real friend circle, and it's your real friends you want to see concerts with, not your Facebook friends. Loudie could also consider rewarding points for things users do anyway, like streaming music. That's how a similar service Fanattac operates.

Then again, Loudie just streamlined its app and was rewarded for that shift to simplicity. Would a quick and dirty integration with Soundcloud or Rdio complicate things too much? That's the balance Loudie and all apps need to strike. Simple enough to not overwhelm users, but complicated enough to be worth their time.